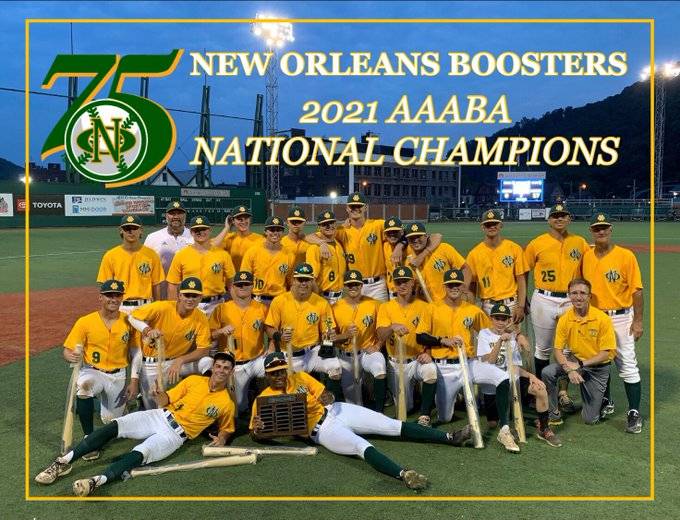 Make it two straight for the New Orleans Boosters.

After winning the AAABA National Tournament championship in 2019, the Boosters did not get a chance to defend the title in 2020.

Given that opportunity in 2021, the Boosters defended the title in decisive fashion.

New Orleans completed a dominant run through the tournament with a convincing 17-6 victory over New Brunswick in a game shortened to seven innings to win the title in Johnstown, PA.

New Orleans jumped all over New Brunswick early, jumping out to an insurmountable 8-0 lead after one inning, led 9-0 after two innings and 14-1 after three innings and coasted to the victory.

It marked the sixth straight game in which New Orleans scored double-figure runs and it marked the fifth game won by the mercy rule in the tournament by the Boosters, who outscored its six opponents 85-19 while averaging 14.2 runs per game.

Christian Westcott paced the attack with two hits, including a triple and four RBI. Westcott was named the tournament’s Most Valuable Player. Brady Faust went 3-for-3 with a double and two RBI. Brennan Lambert belted a three-run home run.

Carson Lore pitched a complete game, allowing six runs on nine hits. Lore had good command, walking no one while striking out five. Brad Edwards Jr. took the loss for New Brunswick, allowing 14 runs, 12 of those earned, on six hits.