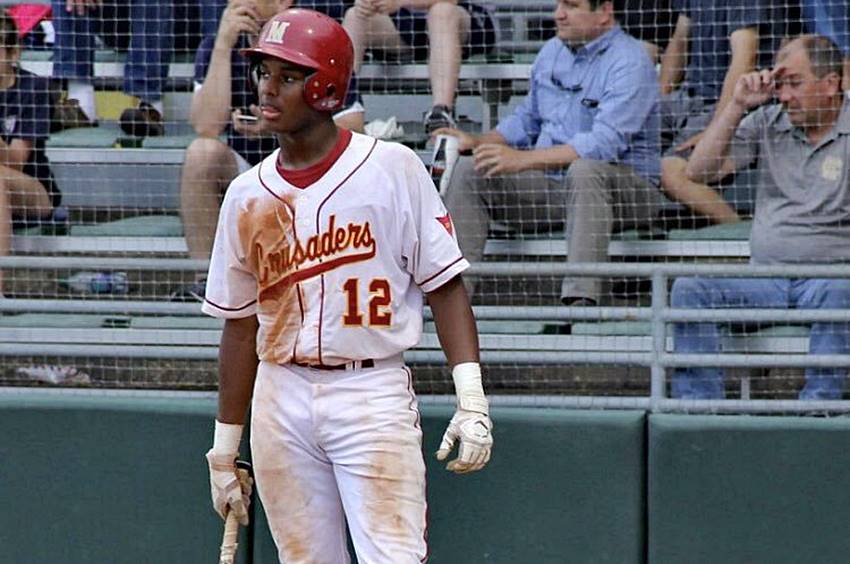 With the halt to the prep baseball season, fans only got a fleeting glimpse of some of the top players in the metropolitan New Orleans area.

This was going to be a good year for teams and players in the area with the likes of St. Paul’s, Jesuit, Archbishop Rummel, Brother Martin, Holy Cross, John Curtis Christian, Ponchatoula, Lakeshore, Lutcher, Thomas Jefferson, Newman, St. Charles Catholic and Country Day off to good starts and ready to compete for state honors.

A plethora of good senior players with college futures is worth a closer look.

Outfielder/first baseman Tre’ Morgan of Brother Martin may have been the best hitter in Louisiana were it not for an injury which resulted in the now common “Tommy John” surgery, which would have prohibited him from playing this season. Morgan (6-1, 185) is an LSU commit. He can pitch, if needed, and has a smooth, quick stroke at the plate from the left side. As a junior, Morgan hit .488 with three home runs and 27 RBI.

Another Crusader outfielder, Cole Stromboe, is committed to Louisiana-Monroe. Stromboe was hitting .357 with a home run and nine RBI and seven stolen bases.

Jesuit has four players already set to play at the next level.

Right-handed pitcher Will Hellmers is an LSU commitment. Catcher Parker Serio has started games since he was a freshman and he is going to Nicholls. Left-handed pitcher Brian Valigosky is a good one and left-handed pitchers are always in demand. Valigosky, who plays right field when he does not pitch, is heading to Tulane. Outfielder/pitcher Chris Favalora has committed to Spring Hill.

Hellmers (6-4, 195) can throw three pitches for strikes and is always in the 86-89 range and has touched 90. He was hitting .404, leading the team in virtually all categories with four home runs, with two games of two home runs, and 14 RBI. Hellmers had nine doubles and a slugging percentage of .894. On the mound, He was 3-0 with a 0.56 ERA, including a pair of strikeouts. Hellmers had 32 strikeouts in 25 innings pitched.

Serio was hitting .237 with seven RBI. He is a sound defensive catcher with good receiving and throwing skills.

Right-handed pitcher Will Kinzeler of Fontainebleau is a Southeastern Louisiana commit. Kinzeler (6-4, 175) has great size, throws 86-87 with his fastball and has gotten bigger and stronger every year with the Bulldogs. He can play either infield corner position. Kinzeler was hitting .667 with six RBI (12-of-22) and he was 0-0 with a 1.91 ERA with six strikeouts in 3 2/3 innings but was injured most recently.

Rummel right-hander Jackson Dennies is a Notre Dame commit. Dennies, who also catches, can hit but projects as a pitcher for the Fighting Irish. Dennies regularly hits 87-89 with his fastball and has touched 91. Dennies recovered from tearing all three ligaments in his knee in 2017 in football. Dennis was hitting .400 with seven RBI and he was 1-1 with a 3.68 ERA in 22 innings pitched with 31 strikeouts before the season was stopped.

Joshwel Caminero (6-2, 160) of Bonnabel is a tall shortstop with range and a big arm. Caminero is a good pitcher as well, featuring a fastball of 87-89 miles per hour. Caminero can play third base as well. Caminero has displayed power to all fields. He may be the sleeper of the class.

Right-handed pitcher Jake Cohen of John Curtis Christian is a Pensacola State commit. Formerly of Brother Martin, Cohen (5-10, 185) throws hard, in the 86-88 range and has touched 90 as his velocity has improved.

Mandeville right-handed pitcher Cole Cressend (6-2, 165) is a Louisiana-Monroe commit. Cressend is a riser in recruiting circles, increasing his velocity the last few years. He now throws in the 86-88 range with his fastball. He can play shortstop and outfield as well. Cole is the son of former Mandeville, Tulane and major leaguer Jack Cressend, who now works for the Los Angeles Dodgers as a pitching cross-checker.

Another Skipper, pitcher Alty Theriot, has committed to Nunez Community College. Theriot (6-2, 205) has growth potential, physically and with his velocity. He is 1-0 on the season with two saves. His fastball is 84-85 and has topped out at 86 and he has an excellent change-up.

Slidell’s Nico Dunne has committed to Nunez as well. Dunne had pitched four innings, allowing two runs on two hits with four strikeouts when the season was halted. Dunne has two doubles and an RBI.

Northshore has three players committed, including pitcher/outfielder Preston Ratliff, who is heading to the University of New Orleans. Right-handed pitcher Andrew Landry of Northshore is on his way to Southeastern Louisiana and Panthers catcher Logan Doody of Northshore is committed to Lyon College.

Multi-sport star Justin Ibieta of Country Day (6-5, 220) is a Tulane football commit who can throw a fastball 85 miles per hour. Ibieta was a superstar for the Cajuns at quarterback.

Another multi-sport star, Lakeshore’s Christian Westcott, is going to Southeastern Louisiana. Westcott (6-1, 185) throws in the mid to upper 80’s and he was the Gatorade Player of the Year in Louisiana in football at quarterback. He can play third base as well.

Second baseman Tyler Nichol of Archbishop Shaw is committed to Coppin State. Nichol started at quarterback on the Eagles football team the past couple of seasons. Nichol (5-7, 135) may be diminutive but he is very competitive.

Nico Saltaformaggio of Holy Cross is committed to Nicholls. Saltaformaggio has been starting games for the Tigers since his sophomore season. Saltaformaggio (5-11, 200) is a solid infielder who can play the corner spots and a right-handed pitcher who has increased his velocity to the 84-86 range.

Infielder Seth Dardar, who transferred from Jesuit to Holy Cross but is ineligible to play his senior season, is going to attend Columbia (NY). Dardar (6-1, 190) is a solid left-handed hitter who throws right and can play virtually anywhere in the infield. Dardar will play for Team Louisiana this summer.

St. Thomas Aquinas has Tyler Domiano set to attend Spring Hill and John Blanchard who has signed with Loyola.

Domiano (5-9, 170) is a first baseman and left-handed pitcher. He was off to a good start on the mound and at the plate this season.

Blanchard (5-10, 190) is a right-handed pitcher who has a mid-80’s fastball and has reached as high as 87-88. He has a good breaking ball and deception in his pitching motion with a slight delay in his leg kick in his delivery to the plate.

There are good junior prospects to watch moving forward as well.

Two of those include Connor Simon of St. Paul’s, who has hit 90 with his fastball. Simon committed as a freshman to LSU. Simon has a good frame (6-0, 170), can run pretty well and is athletic. Simon is a good shortstop who can hit as well. Simon was hitting .400 with a home run and 10 RBI when play was stopped. On the mound, he was 1-0 with no earned run average with a save. In 11 1/3 innings, Simon allowed no runs on four hits with 28 strikeouts.

St. Paul’s third baseman Matthew Russo is a Southern Miss commit. Russo, who is an imposing figure (6-3, 225) has a good arm, was hitting .444 with two home runs and six RBI. He can play either corner position on the infield.

Kenya Huggins of St. Augustine regularly throws 87-89 with his fastball and touched 90 this season before the season shut down. Huggins (6-3, 200) is strong. He can play the outfield and he can play third base or shortstop. Huggins will have many opportunities. Purple Knights outfielder Jardy Montgomery (6-0, 170) is another junior with offers. Montgomery is a track star who runs extremely well and has a good arm. Montgomery can play several infield spots as well as a versatile player.

Alston is a smooth fielder who could play shortstop or second base and can hit while Artigues is a solid hitter from the left side. He is the brother of former Falcons star Champ Artigues, now of Loiusiana Tech, and the son of Southeastern athletic director Jay Artigues. He is also the cousin of Tulane senior infielder Jonathon Artigues.

Ponchatoula outfielder Collin Husser is also committed to Southern Miss. Husser (6-5, 187) is an outfielder and pitcher for the Green Wave. His fastball is a good one at 87-89 and has touched 90. His length is impressive and he is bound to fill out and get stronger.

Holy Cross shortstop Gavin Schulz is committed to play at the University of Louisiana at Lafayette. Schulz (5-8, 155) has a good arm for the position, can make the play and throw from the hole well and as a pitcher, throws 83-84 consistently. Schulz is the younger brother of former Holy Cross and Delgado star Grant Schulz, not at Louisiana-Monroe.

Tiger teammate Lance Lauve is a Southeastern commit. A right-handed pitcher, Lauve (6-0, 200) throws 84-86 consistently with his fastball and has a very good curve ball.

There are more to speak of and by all means, make sure you send any other commits in to us and we will publish them.

Credit these young men and their teams for outstanding careers and outstanding seasons, to date, which hopefully have not ended.