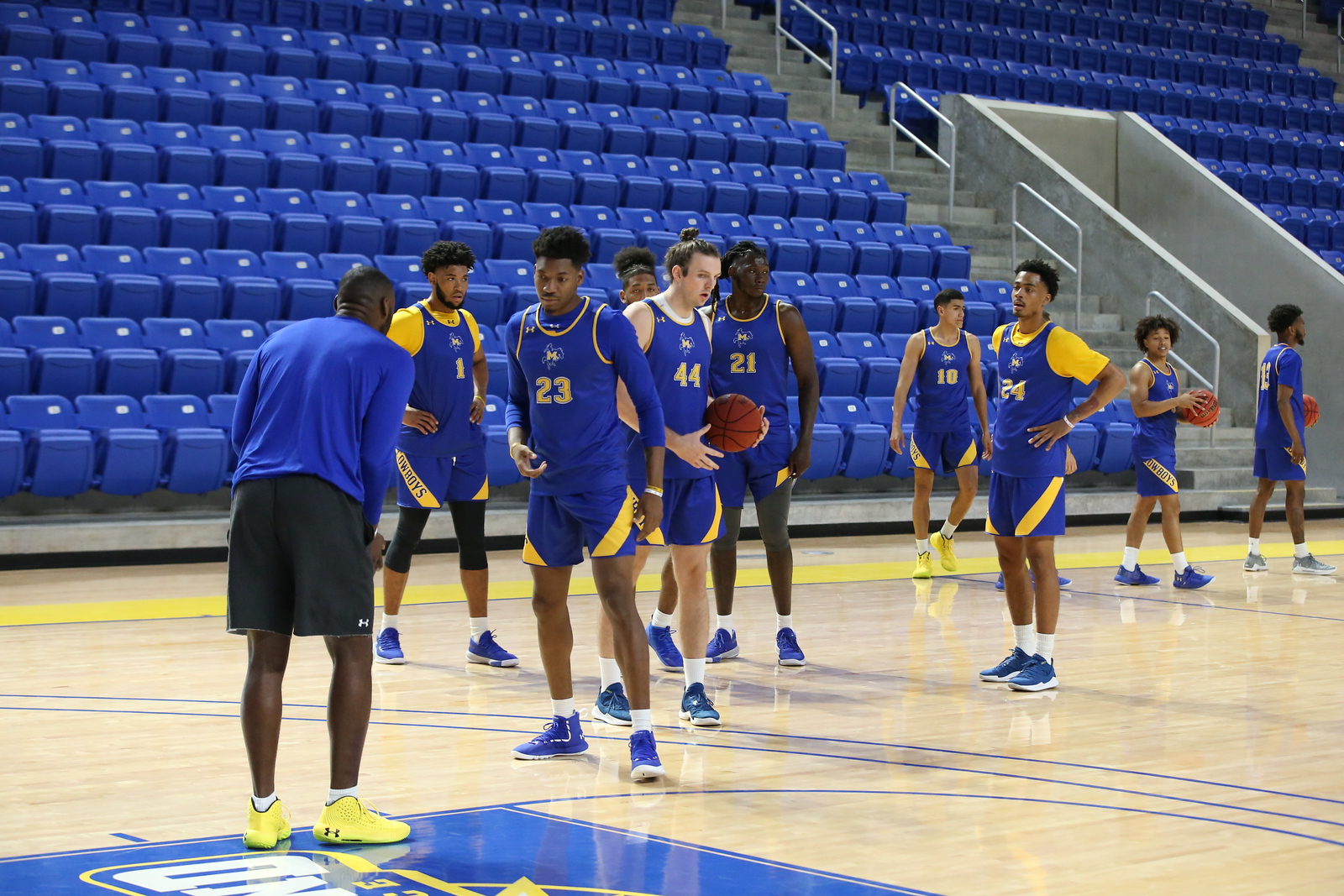 Those are four things second-year McNeese Cowboys basketball head coach Heath Schroyer emphasized in his first press conference of the year as the Cowboys opened up practice for the first time on Monday in preparation for the 2019-20 season.

McNeese returns just four players from last year’s squad that posted a 9-22 overall record. However, three of those four – seniors Sha’Markus Kennedy and Roydell Brown, and sophomore Trey Johnson – were big contributors to the team.

Both Brown and Kennedy accounted for 42 percent of the Cowboys’ rebounding and 35 percent of the scoring last season despite Brown missing the last six weeks of the season due to an ankle injury.

Brown led the team in both scoring (14.5 ppg) and rebounding (9.5 rpg) while Kennedy was second on the squad in both categories (13.1 scoring, 7.1 rebounding) and ranked third in the Southland Conference with 59 total blocked shots and a 1.9 per game average.

“They’re obviously farther ahead (of the rest of the team),” said Schroyer about the returners. “They have really bought into and they champion our culture. That’s the one thing I think that I’m really impressed with is that the returners know what’s expected on and off the floor and they’ve taken on a leadership role within the team.”

The squad includes 12 newcomers that will give the team depth it hasn’t had in quite some time.

Of those newcomers, 6-foot-5 point guard A.J. Lawson is expected to play a major factor this year after having to sit out last season due to transfer rules.

“A.J. is a 6-foot-5 point guard who is big and strong,” said Schroyer. “He can really play four positions. He can score a lot of ways and can really pass. But not only can he pass, he’s a willing facilitator. He can fill the stat sheet because he can rebound, he can score, and he can get the ball where it needs to go. He’s a difference maker.”

Junior forward Jeremy Harrell (6-8, 240) is another player that sat out last season and is eager to get on the floor for the first time. Harrell, who trimmed up during the offseason, can play both inside and outside.

Johnson had his redshirt pulled early last season and ended up playing a big part for the year. Schroyer expects him to be one of the best defenders on the perimeter on the team.

“He’s an integral part in what we do,” said Schroyer. “I think the neat thing about ‘Sleepy’ is that he is the ultimate glue guy. He’s probably our best perimeter defender, has an extremely high basketball IQ, and for a young guy, he has innate ability to lead and motivate.”

Kuxhausen connected on over 32,000 three-point shots during offseason workouts.

“Dru is an elite shooter,” said Schroyer. “I think he’s as good as any shooter in the country. He has an unbelievable skill set and has deep rage, but he also gets the ball off quick. He’s going to score the ball. He just brings a dimension that we didn’t have last year and is someone that can consistently knock down perimeter shots at a high clip.”

Poyser transferred in from St. Bonaventure and can play three positions. Having already played Division I ball, Poyser is expected to be a key piece of the puzzle this season.

Washington is another player who has played at the D-I level (Robert Morris) before transferring from Barton Community College. The junior guard is a good shooter, is good at handling the ball, and has the ability to shoot and drive close outs.

Both Baker and Orlina will add depth at the guard and forward positions, Baker being another strong shooter and is good off the screen with catch-and-shooting. Orlina was part of two JUCO Final Four teams, one being a national championship year, so he knows how to win games. Schroyer compared him to a Swiss Army Knife, meaning he can be used, and beat teams, in a lot of ways.

Moore is another big body that is expected to create some space in the paint. He’s got a strong body, high basketball IQ, and is a good passer for his size.

Palmquist is the only freshman on this year’s team and is expected to have a bright future for the Cowboys.

McNeese will open the season at Western Michigan on Nov. 6.