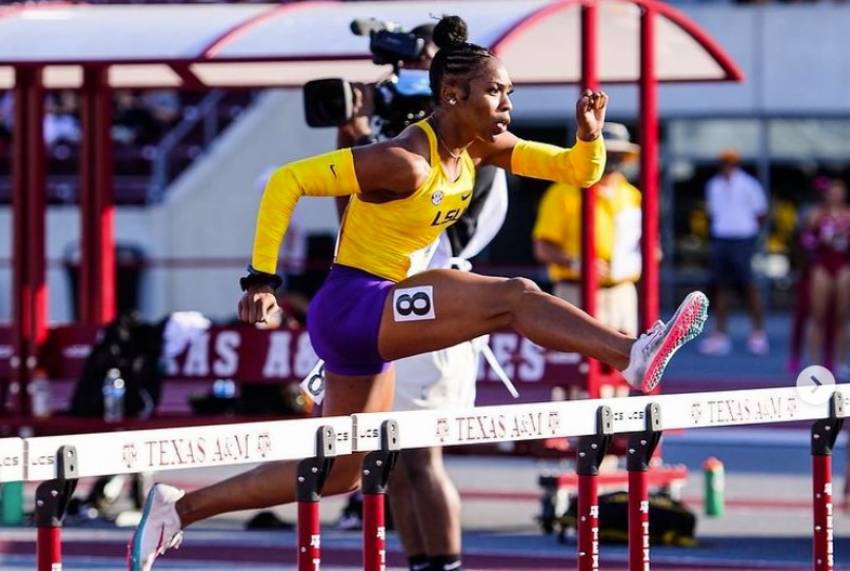 Armstrong, a sophomore at LSU and a graduate of St. Katherine Drexel Prep in New Orleans, had a memorable month of June as she won an NCAA Championship and then earned a position on the United States National Team. At the NCAA Outdoor Track & Field Championships on June 11, she posted a time of 12.57 seconds in rainy conditions to capture LSU’s first 100-meter hurdle title since 2000. She followed her NCAA Championship performance by placing third in the 100-meter hurdles at the United States Track & Field Championships (all athletes, including professionals) to earn a slot on Team USA for the Track & Field World Championships to be held later this month. She posted a time of 12.47 seconds to earn her spot on the national team. Armstrong and her teammates also earned a fourth-place finish in the 4×100 meter relay at the national championships.

Armstrong earned the honor over four other top local athletes:

• Rhett Centanni had a double dose of baseball excellence in June. Playing for Archbishop Rummel-based Malcolm Dienes, in the CrescentCitySports.com Prep Summer League, he batted .452 (14-for-31) with three home runs and 14 RBI to lead his team to a second-place finish and a playoff spot. On weekends, he played for Gibbs Construction in American Legion baseball and batted .565 (13-for-23) with four doubles and eight RBI in 12 games.

• Jayden Hauck, a 2022 Hammond High School graduate, fired her best game of the tournament in the championship match to claim the girls’ singles title at the U.S. High School Bowling National Championship in Louisville on June 20. The No. 2-seeded Hauck defeated top-seeded Cara Beissel of Seabreeze, Florida, 249-222, for the title, after advancing out of a one-game rolloff against the third and fourth seeds. It was the first national championship for Louisiana since the event began in 2016.

• Ellie Schneider, a 6-4 middle blocker for the Cajunland Volleyball club, led her team to an 11-2 record and a consolation championship at AAU nationals in Orlando, Fla. “She led our team in kills and blocks,” coach Ashley Blink said. “She’s good. But it’s the extra things that make her special…her leadership, her ability to rally her teammates and be so supportive of them.” Verbally committed to the University of Kansas, she will be a senior this fall at Country Day.

• Cali Smith, a young sprinter for the New Orleans Metro Stars, broke the meet record for the 9-and-under age group in the 200-meter dash with a time of 29.05 at the AAU Regional 11 national qualifier held at Southeastern Louisiana in Hammond from June 14-18. A student at Abney Elementary School in Slidell, she will compete in the AAU Junior Olympics in Greensboro, N.C., from August 1-6.