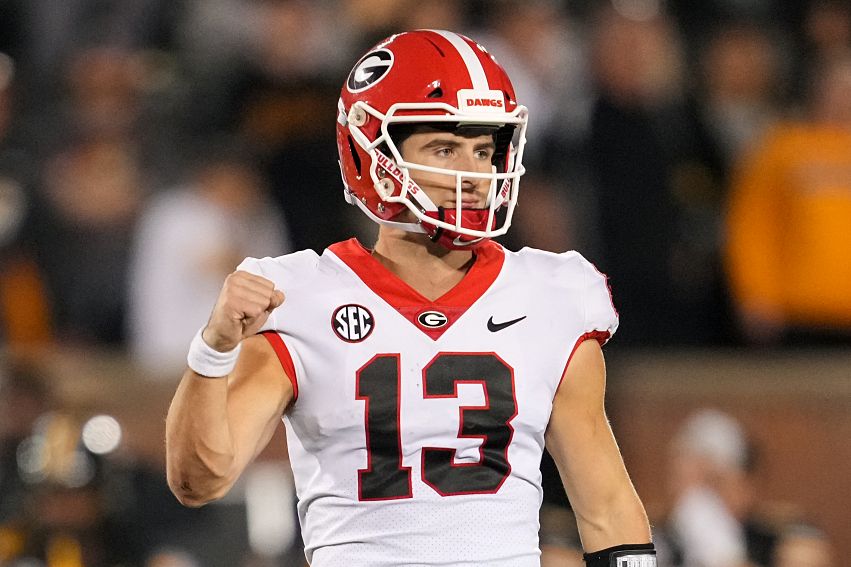 Georgia quarterback Stetson Bennett, a one-time walkon and now a two-time national champion, is the winner of the annual Manning Award presented by the Allstate Sugar Bowl.

“I obviously couldn’t be here without my teammates,” Bennett said Monday on a Zoom news conference. “I got sacked nine times this year. I owe a lot to my offensive line.”

Quipped Archie Manning, the patriarch of the first family of quarterbacks, “I beat that in Chicago in one game,” referring to a game with the Saints in which he was sacked 11 times.

Bennett was a counselor at the Manning Passing Academy last summer.

“The coolest thing for me,” Bennett said, “is we went into a meeting room and talked ball. The biggest thing was meeting all the fellow (counselors). Getting to know them – we’ve still got a group chat … and we cheer each other on.”

The Manning Award is different from the other annual college football awards in that it takes into account the postseason.

“I think it’s one of the great stories ever in college football,” said Archie Manning of Bennett. “Just an unbelievable run through the postseason this year.”

In the SEC Championship win over LSU, the CFP semifinal at the Peach Bowl victory over Ohio State and the CFP national championship game triumph over TCU, Bennett earned most outstanding player honors in each game while completing 73 percent of his passes for 11 touchdowns.

“The postseason – that’s where football is played,” Bennett said. “I think it is the most prestigious quarterback award in the country.”

“Sed is that constant,” Bennett said. “He doesn’t get hurt, he plays every single snap and he loves football. I don’t know if he loves his teammates or football more. (Offensive linemen) don’t get the credit they deserve. He’s gonna help whoever (is the starting quarterback next year). He’s been on the biggest stage and in the biggest games and knows what it’s like to be a leader.”

Bennett said he will train for the NFL Draft at Apex Sports in Fort Worth, Texas.

“I told people coming out of high school and coming up to Georgia, it’s the same concept,” he said. “Once you get to the NFL, it’s the same thing. My job is to go out there and play football.”

Archie Manning got to know Bennett when grandson Arch was on the recruiting circuit, making four visits to Athens before ultimately deciding on the University of Texas.

“I had an opportunity on each occasion to spend time with Stetson,” Archie Manning said. “We all got to know him better and made his entire journey so much fun for us.”

Likewise, Bennett understands the importance of the Manning name. “I remember my dad telling me when I was growing up, ‘Watch Peyton and Eli. They do it right,’” he said. “(The Manning Passing Academy) is different than any other camp. Longevity is built from character, truth and solid people. I can’t think of a higher honor or award, besides being voted a captain.”

Later this year, Bennett will come to New Orleans to accept the Manning Award.