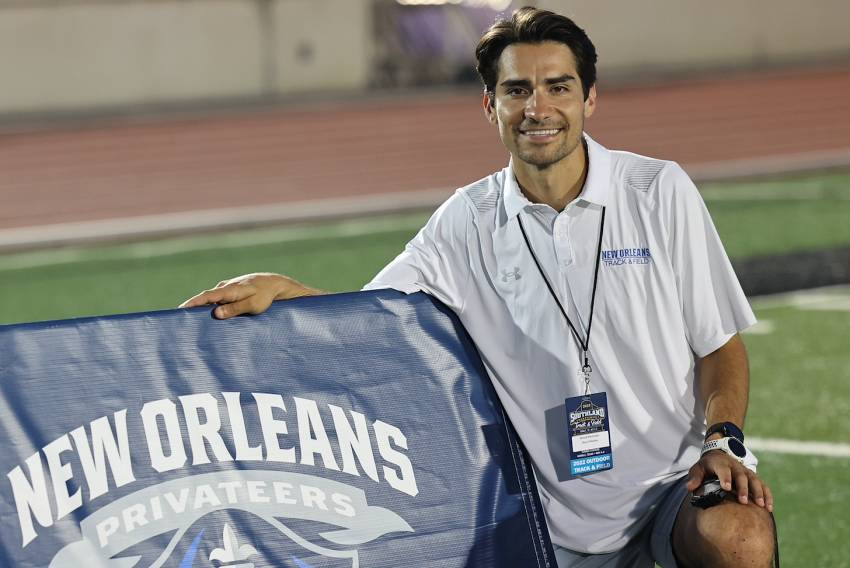 Prior to the nationwide search led by Matthew Thompson, track & field sport administrator and associate athletic director for marketing & fan engagement, Moreaux was appointed as interim head coach at the end of the 2022 outdoor track and field season.

During his four-year stint as assistant coach and associate head coach, Moreaux was pivotal in the growing success of the women’s and men’s distance programs.

In fall 2021, he led the women’s cross-country team to their first runner-up finish at the Southland Conference Championships since joining the conference in 2013. The men placed fourth to mark their best finish. To put this in perspective, when Moreaux joined the Privateers, the women were ranked 11th and the men ranked 12th.

In addition, he coached former Privateer Arina Kleshchukova to two appearances in the NCAA Cross Country National Championships.
Moreaux led the distance squad to gold (men) and silver (women) at the 2022 SLC indoor championships in the distance medley. With multiple top three finishes amongst his distance runners, he also led graduate student-athlete Parker McBride to become the indoor and outdoor SLC 800m champion. McBride was also one of seven to qualify for NCAA regionals.

Prior to joining New Orleans, he served as an assistant in charge of distance runners and other administrative affairs at California State University, Northridge.

QUOTES
Matthew Thompson
“Brock rose to the top of a highly qualified candidate pool. His understanding of the needs of our student-athletes and his ability to articulate his future plans of continuing to elevate our program impressed our committee. We are extremely confident in Coach Moreaux’s ability to lead the New Orleans Track and Field/ Cross Country programs.”

Brock Moreaux
“I am really grateful and excited for this opportunity to continue building with the student-athletes, colleagues, mentors, and City that has helped mold me into the person I am today. I, first would like to thank former Head Coach Brian Johnson for all the opportunities and guidance he gave me over the last 4 years. I would like to also thank our leaders Tim Duncan, Matthew Thompson, and the entire search committee for believing in me and my vision for the Privateer Cross Country and Track & Field Programs. My goal coming in to this University 4 years ago was to bring a championship home to New Orleans by providing a supportive and positive student-athlete experience.”

No stranger to the Southland Conference, Moreaux was a four-year letterman at McNeese, competing in both track & field and cross country between 2011-2014. He won the conference title in the steeplechase at the 2015 Southland Championships.

He earned both of his degrees at McNeese, a Bachelor’s in Business Administration and a Master of Science in Health and Human Performance.

Moreaux is a native of New Iberia and graduate of Delcambre High School. He currently resides in New Orleans.