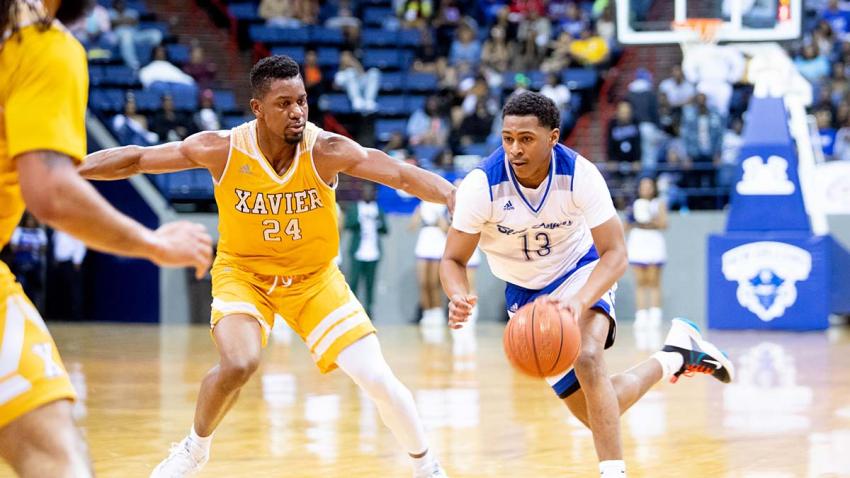 The Dillard University men’s basketball program received votes in the NAIA’s Preseason Top 25 Poll. The program is expected to bounce back after an uncharacteristic fifth-place finish a year ago.

The Bleu Devils were an offensive juggernaut during the 2019-20 campaign, ranking in the NAIA’s top-five for assists per game (19.34) plus top-ten for rebounds per game (42.28), offensive rebounds per game (13.44) and three-pointers made (333). Newell’s squad also placed among the top-20 nationally in points scored with 2724.

Dillard was no slouch on the defensive side of the ball either, landing among the 20-best teams regarding defensive rebounds per game (28.84) and blocks (109).

The blue and white bring back three seniors to spearhead their quest for a championship as Malik Amos, Elijah Moore and Xavian McKay headline the student-athletes heading back to campus.

Amos shared GCAC Co-Player of the Year with Talladega’s Morris Dunnigan last season and earned a spot on the All-GCAC First Team. He was second in the NAIA for free-throw percentage (.898), sixth in three-pointers (99), top-15 for points (613) and three-pointers per game (3.09) plus top-20 with 19.16 points per contest.

DU netted a pair of former GCAC rivals in Tyrus Crawford and Raymone Lampkin plus another NAIA transfer in Da’Rell Domineck.

Crawford, a Southern-New Orleans transfer, ranked fifth in the GCAC with 0.84 blocks per game and sixth with 21 blocks last year for the Knights.

Lampkin, who also came over from SUNO was sixth in the nation in blocks per game (2.29), tenth in total blocks (55) and among the country’s top-20 players in pulling down offensive rebounds (3.08 per game).

Domineck played his first three seasons at Pikeville (Ky.), helping the team earn an eighth seed in the NAIA Tournament’s Cramer Bracket in 2019-2020. He ended the year second on the team in rebounds (108) and offensive rebounds (33) plus ranking third among Bears players in field-goal percentage (.631) and defensive rebounds (75).

Dillard will play two ranked non-conference opponents in #13 LSU-Alexandria and #16 Loyola-New Orleans (twice) to go along with Our Lady of the Lake, Mobile (twice) and William Carey (twice).