Memories still linger from LSU’s epic battle with No. 1 USC in 1979

It was the third game on the schedule for the LSU Tigers. But it was no ordinary matchup.

September 29, 1979 was like no other date in Tiger Stadium before or since.

It was the day that top-ranked USC Trojans rolled into Baton Rouge to face the underdog Tigers, ranked 20th. The squads had never met on a football field prior to that time.

Despite edging Ohio State 17-16 in the 1979 Rose Bowl a few months earlier, the Trojans were edged out for college football’s top spot by Bear Bryant’s Alabama Crimson Tide in the polls for the 1978 national title. USC felt slighted and had scores to settle entering the ’79 campaign. Coach John Robinson’s team disposed of Texas Tech, Oregon State and Minnesota by a combined score of 111-26 before their matchup with the Tigers.

Part of that memorable game, Mark Ippolito had been Louisiana’s top prep prospect in the 1977 recruiting class, earning All State and multiple All-American recognitions as a 6-foot-5, 225 linebacker at Brother Martin for legendary head coach Bobby Conlin,

The finalists for Ippolito’s signature came down to Ole Miss, Oklahoma, LSU and Alabama. He strongly considered the Sooners and Crimson Tide due to their national prominence. LSU head coach Charlie McClendon quizzed him, “You’re from Louisiana. What are you going to do after football?”’ Along with some prodding from Tigers assistant Barry Wilson, Ippolito determined that the homestate Purple and Gold were his best option.

The scene at the stadium was festive earlier that day, but grew to a fever pitch due to what was at stake. The emotions had begun to steadily rise earlier than normal on campus.

“As we walked around the campus that entire week, it was obvious that there was a special mood all around,” recalled Ippolito, then a sophomore. “The mood on campus started to get crazy on Tuesday. We had a couple of extra days to get the fans ready because we were playing the No. 1 Trojans. They were coming into Louisiana, and we sensed the attitude that they thought that they were just going to take advantage and have their way with the LSU Tigers. We weren’t having any of that.”

From that USC squad, 36 Trojans reached the NFL, and 12 were first-round draft picks. Two were Heisman winners – Charles White (1979) and Marcus Allen (1981). Offensive guard Brad Budde was that season’s Lombardi Award winner. Three reached the Pro Football Hall of Fame – Ronnie Lott (2000), Anthony Munoz (1998) and Allen (2003). One player would go on to be a successful NFL coach, Jeff Fisher while another, Hoby Brenner, would end up with a fine 13-year career with the New Orleans Saints.

The oddsmakers rated the home team as an 11-point underdog. It fueled the Tigers.

And the mood changed for many of the visitors before kickoff once the live tiger mascot arrived.

“When Mike iV came out of his trailer, things changed,” Ippolito laughed. “Cheerleaders used to poke the cage to make him roar. They did such a good job stationed behind the USC bench, some of the USC players ran onto the field, taken back that there was a real Tiger in that cage. They were collecting in the middle of the field for as long as they could. Some were completely frightened.”

White had 185 yards on 31 carries. Allen chipped in with 48 yards on nine totes. LSU replied with a commitment to their running game as well. 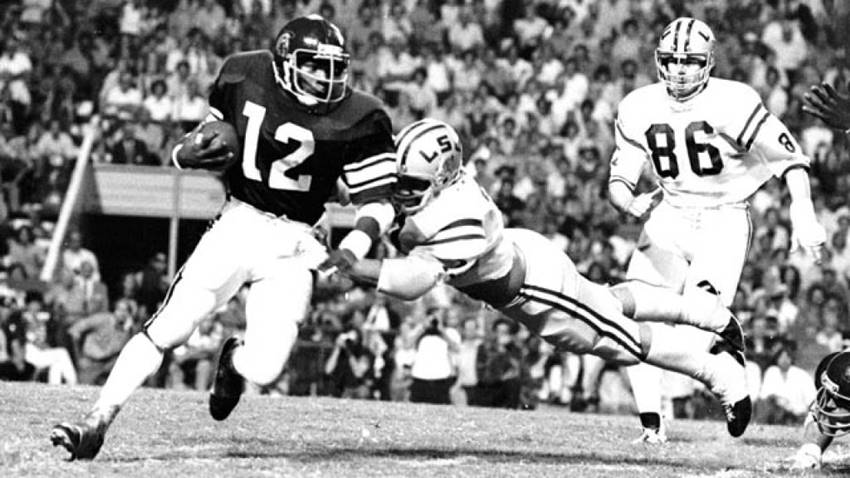 “We hit them hard from the very first play,” Ippolito explained. “Hokie Gajan was running the ball well but was hurt and couldn’t finish the game. LeRoid Jones got in there, and Jude Hernandez got his turn. We kept throwing everything at them that we could.”

Following a 13-yard scoring hookup from quarterback Steve Ensminger to senior running back LeRoid Jones and a pair of junior kicker Don Barthel field goals of 38 and 32 yards, the Tigers held a 12-3 lead in the early moments of the fourth quarter. It was no surprise to the Tigers.

“The message was shared by the entire team because it came from the top,” Ippolito reflected. “Not only were we not going to play a bad game but we were actually going to beat the Trojans. We were going to show then what a bunch of tough players from Louisiana could do.”

McClendon had employed a two quarterback system throughout his 18 year tenure as LSU head coach, beginning with the Jimmy Field and Lynn Amedee tandem in 1962. Other notable pairings include Pat Screen and Billy Ezell along with Bert Jones and Paul Lyons in the early ’70’s.

From 1976 to 1979, Ensminger and David Woodley shared the duties behind center. It was Charlie Mac’s M.O. This duo not only co-existed but flourished.

“Each one had a particular skill set,” Ippolito noted. “To play both QB’s was genius. Most teams prepare all week to face one guy. Now the defense has to change their strategy. That turned out to be a real good move. Both handled it very well. They were both team leaders. They both did their jobs very unselfishly.”

USC’s White cut the Tigers’ advantage to 12-10 with a four-yard touchdown run. Following a change of possessions, the Men from Troy had the ball in the waning moments of the final stanza.

From their own 36-yard line facing a 3rd-and-9, USC looked to be stopped. LSU junior defensive tackle Demetri Williams sacked quarterback Paul McDonald but defensive lineman Benjy Thibodaux inadvertently brushed McDonald’s face mask. The infraction now would be assessed a five-yard penalty for incidental contact. At that time, any contact with a face mask drew a 15-yard foul with an automatic first down.

It was the moment of the game.

The Trojans gained new life. Six plays later, the drive was culminated by an eight-yard scoring toss from McDonald to Kevin Williams with 32 seconds remaining. USC slipped out of town with a 17-12 decision. 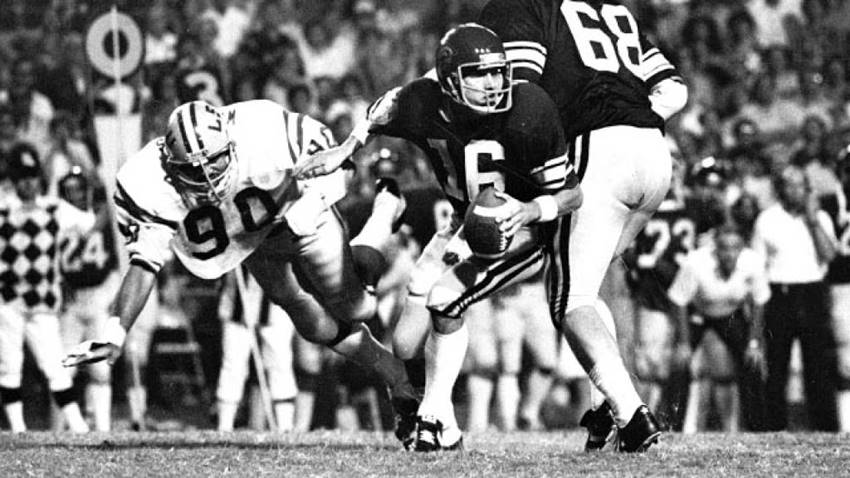 The script was written prior to the ’79 season that this would be McClendon’s swan song. The players rallied around their coach and were determined to make his final season a special one. They wanted that game and a great final campaign for Charlie Mac. It didn’t go as well as they hoped.

“He was allowed to coach through the end of the season. That was such a tough schedule. No one could have done it any better than Coach did.” Ippolito said. “We felt it was an injustice to Coach Mac for all he had done for LSU. A disrespect for him, and we fed off of that for the entire season.”

McClendon died in 2001 and took that disappointment from the USC game to his grave. His career coaching finale came December 22, 1979 in the Tangerine Bowl against Wake Forest.

Before the bowl game, McClendon made a final appeal to his troops.

“‘I want to go out a winner,’ he told us,” Ippolito recalled “‘I’m asking you guys to win this game for me.’ You could see the rage in the players’ faces. It set the tone for that game. Wake Forest didn’t have a chance.”

LSU thrashed the Demon Deacons, scoring on their first three possessions of the game and never looking back on their way to a 34-10 win.

Mark Ippolito and his teammates lost a little part of themselves on that September 29th evening on the floor of Tiger Stadium. It was a life lesson.

“It was the ultimate disappointment. We won that game between the goal lines and sidelines. That game was a career experience for everyone involved. There will always be a lot of history following the USC-LSU game from 1979. I thank God for my time spent at LSU.”