Memorable Baseball Games in the Superdome: LSU and Tulane battle on “Night of Records” 20 years ago 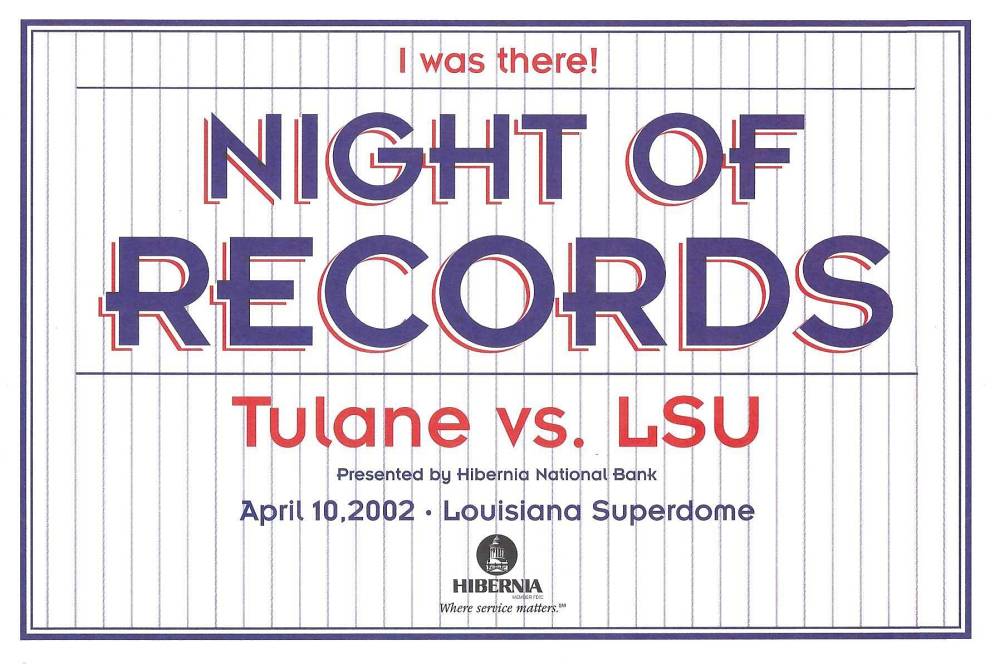 The primary impetus for building the Louisiana Superdome in the early 1970s was a new home for the New Orleans Saints. The “father” of the Superdome Dave Dixon also envisioned the facility would be home for NBA and MLB franchises. He had the foresight to ensure the design for the stadium included configurations to accommodate baseball and basketball games in addition to footbll. After numerous attempts to entice a major league team to New Orleans, city and state officials struck out in attracting a big-league team. That’s not to say the Superdome didn’t host baseball games. During 1976-2003, major-league exhibition games, a minor league team’s regular-season games, and college games were played in the domed facility. Over the next few weeks, we’ll highlight some of these memorable baseball games.

Throughout its history, the Louisiana Superdome has been the site of countless sporting events with huge crowds, involving the New Orleans Saints, New Orleans Jazz, Sugar Bowl, and NCAA Final 4 championships. On April 10, 2002, LSU and Tulane squared off in a baseball game at the Superdome billed as a “Night of Records.” The size of its crowd didn’t approach those other events, but at the time its 27,673 fans was the largest single-game crowd to ever attend a collegiate baseball game.

LSU (20-13) and Tulane (18-16) were having lackluster seasons in 2002, but it didn’t deter interest the the rivalry. The game had originally been scheduled for Zephyr Stadium in Metairie, but Tulane and LSU officials agreed to move the game to the Superdome.

The promoters for the LSU-Tulane contest had intentions of breaking the all-time record for a college game (24,859) that occurred in the 1999 College World Series in Omaha, Nebraska. Tulane assistant athletic director Scott Sidwell said, “Having an opportunity to break the record was the driving force behind the move.” LSU athletic director Skip Bertman said, “This was a no-brainer. I’m all for the record, and I hope we get it. The difference now is we have a facility to do that, and we have wonderful supporting people in Louisiana.”

24,000-plus tickets were sold prior to the game, which ensured the largest crowd to attend a regular-season game. That previous record was 21,043 in 1996, when Texas and TCU faced each other at The Ballpark in Arlington in Arlington, Texas.

The walk-up crowd purchasing tickets put the attendance well above the record, with a total of 27,673. Each fan was treated with a cardboard placard that said “I was there! Night of Records.”

Petit was perfect through the first four innings before issuing a hit and a walk in the fifth. He was able to get out of the inning unscathed on a timely double play.

Tulane got on the scoreboard in the seventh inning when Michael Aubrey hit a two-run single off Clay Harris. Gerald Clark hit a bases-loaded double to score three runs in the bottom of the ninth for a final score of 9-5.

Petit, who raised his record to 4-5, said after the game, “When you have a lead, it makes it easier to pitch. Luckily, our team fed off the crowd a little and keep the intensity alive.

Obviously disappointed with his team’s performance Jones said, “To be part of history is a special thing.”

First-year LSU head coach Smoke Laval commented, “College baseball all over the country should be excited. If we can do it in Louisiana, don’t be surprised to see it in other places.”

Laval’s prediction was correct about future record crowds. The College World Series routinely has 30,000-plus fans in attendance, including one in which LSU played North Carolina in 2008. The current all-time mark (40,106) was set in 2004, when the University of Houston played San Diego State in the first game played at Petco Park in San Diego.