The primary impetus for building the Louisiana Superdome in the early 1970s was a new home for the New Orleans Saints. The “father” of the Superdome Dave Dixon also envisioned the facility would be home for NBA and MLB franchises. He had the foresight to ensure the design for the stadium included configurations to accommodate baseball and basketball games in addition to football. After numerous attempts to entice a major league team to New Orleans, city and state officials struck out in attracting a big-league team. That’s not to say the Superdome didn’t host baseball games. During 1976-2003, major-league exhibition games, a minor league team’s regular-season games, and college games were played in the domed facility. Over the next few weeks, we’ll highlight some of these memorable baseball games.

Despite the persistence of the city of New Orleans and the state of Louisiana to acquire a major-league team, going back to the early 1970s, their efforts were unsuccessful. In the spring of 1984, Superdome officials were still making their pitch to Major League Baseball to acquire a team. The Superdome was the site of major-league spring exhibitions games for the fifth consecutive year and the second Pelican Cup game between Tulane and UNO. In early June, there was a different baseball attraction in the Superdome.

Denver-based entertainment promoter Barry Fey came up with the idea to gather a collection of former major-league all-stars to play in the “All-Time All-Star” series. The first game occurred in Denver in 1983 and drew over 56,000 fans in Mile High Stadium. Fey thought New Orleans would be good site for one the games planned for 1984, since the city was still pursuing opportunities to showcase the Superdome. 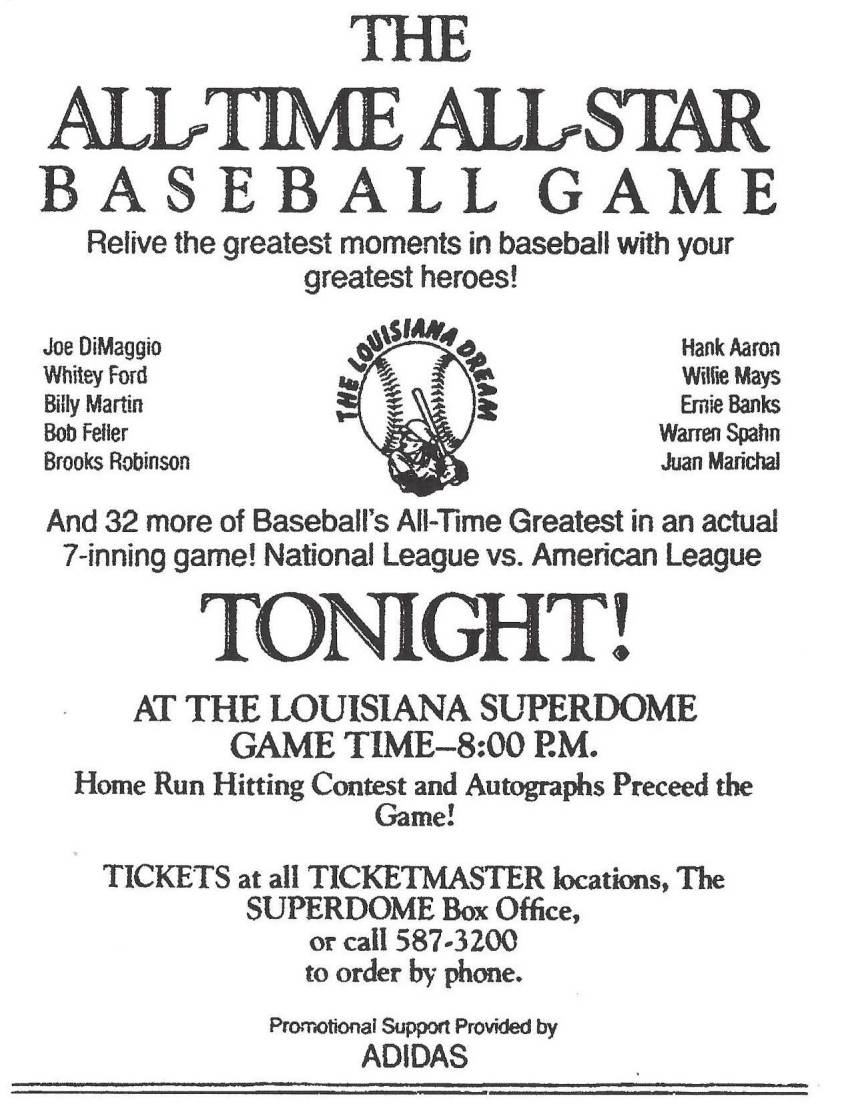 Fey arranged for the American All-Stars to face the National All-Stars on June 2 in New Orleans. He got a bargain by paying each player $1,500 plus expenses. And they included some of the biggest names in baseball history: Hall of Famers Ernie Banks, Hank Aaron, Willie Mays, Warren Spahn, Brooks Robinson, Whitey Ford, and Bob Feller.

The retired players looked forward to performing on the field again. Banks, the former Chicago Cubs slugger with 512 career home runs, said, “It’s just not an old-timers game. We look upon it as an event where we have a chance to perform again…to be with people who have followed our careers.” Warren Spahn, who won 363 career games, mostly with the Braves, said, “We still enjoy putting the uniform on. None of us can hit like we used to and none of us can throw like we used to. But in each of the dugouts, everybody wants to win.”

Gene Mauch was the manager for the Americans, while Herman Franks was the skipper for the Nationals. Spahn and Feller drew the starting pitcher assignments. The last time they had faced each other as pitchers was in Game 5 of the 1948 World Series, when the Boston Braves defeated the Cleveland Indians.

Feller had fond memories of New Orleans since he had spent spring training in the city with the Cleveland Indians in 1938 as an 18-year-old phenom.

The Nationals starting lineup featured an all-Chicago Cubs infield consisting of Banks at first base, Glenn Beckert at second, Don Kessinger at shortstop, and Ron Santo at third.

In the bottom of the first inning, Hank Aaron, the all-time home run leader at the time, didn’t disappoint the crowd. He hit a home run to deep left field off Bob Feller with Willie Mays on base to claim an early Nationals lead. Aaron had warmed up with two home runs in a pre-game home run derby. His slam recalled another occasion when he hit a home run in New Orleans on April 1, 1974, when the Atlanta Braves played an exhibition game against the Baltimore Orioles at Kirsch-Rooney Park. Three days later, Aaron tied Babe Ruth’s all-time home run record in a regular-season game against the Cincinnati Reds.

Spahn gave way to former teammate Johnny Sain in the third inning, reminiscent of the 1948 season when the Boston Braves routinely used the two hurlers on only two days rest. “Spahn and Sain and pray for the rain” became the team’s mantra during their run for the National League pennant.

The score remained 2-0 until the bottom of the sixth. The Nationals banged out five straight hits for five runs against Phil Regan, the sixth American’s pitcher in the game. Billy Williams produced a two-run double, while Orlando Cepeda hit a two-run single. The game ended after the scheduled seven innings, 7-0.

The crowd was estimated at 10,000, well below the expectations of the game’s organizers. The earlier major-league exhibition series had attracted the fewest number of fans (24,286) in the five years the Superdome hosted major-league baseball. The inaugural series in 1980 had 88,542 in attendance.

Times-Picayune sportswriter Peter Barroquere reported that Bill Curl, Hyatt vice president for marketing and public relations, believed New Orleans baseball fans “would no longer accept and support exhibition baseball.” Curl said, “They’re [fans] saying, ‘When we have the team, tell us about it and we’ll buy a ticket. But don’t ask us to buy a ticket to get a team. Don’t ask us to continue to support anything less than a New Orleans team playing a full-fledged major-league schedule and be enthusiastic about it.’”

Despite the lack of current fan support, Curl said it wouldn’t diminish the city’s efforts to bring in a major-league team.

Barroquere wrote that he believed there were three factors working against the city in getting a franchise at that time. He offered, “There was no buyer for a baseball team in New Orleans. No prospective buyer of a team would likely accept a deal which includes a city and state tax package that goes up to 14 percent next year. Baseball commissioner Bowie Kuhn was adverse to putting a franchise in New Orleans.”

Most New Orleanians didn’t understand all the reasons why the Superdome had yet to get a major-league team. But on that night in June, the crowd was treated to a rare spectacle involving some of the greatest players of all time.