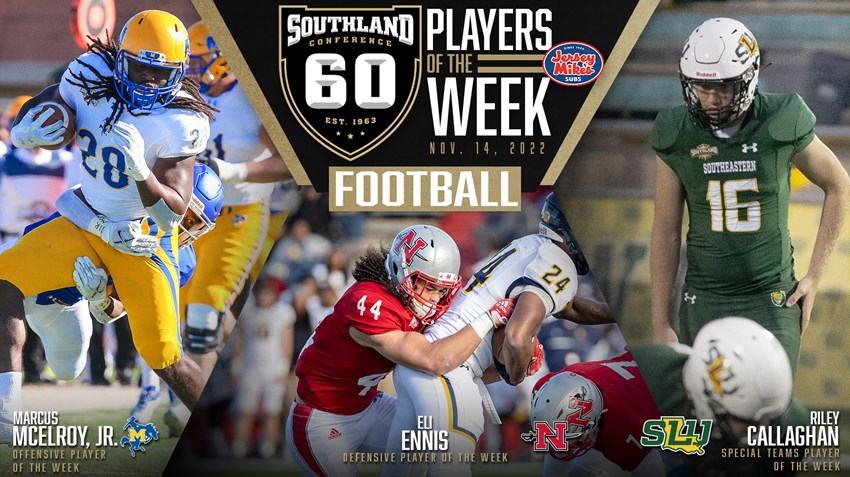 FRISCO, Texas – McNeese’s Marcus McElroy, Jr., Nicholls’ Eli Ennis, and Southeastern’s Riley Callaghan are the winners of the Southland Conference’s football weekly awards for the 11th week of the season, as announced by the conference office Monday.

Offensive Player of the Week: Marcus McElroy, Jr., McNeese – RB – Gr. – Denver, Colo. (Mullen HS)
McElroy came off the bench to rush for a career-high 136 yards on 12 carries and two touchdowns in a 21-10 win over HCU. He averaged 11.3 yards per carry and had five rushes of 10 yards or more, with four of those going for 20 yards or more. His long run of 30 yards came on his first carry of the game and he scored on runs of 16 and 11 yards.

Defensive Player of the Week: Eli Ennis, Nicholls – LB – Fr. – Ohatchee, Ala. (Ohatchee HS)
Ennis earns defensive player of the week honors for the second time this season after recording eight tackles, one pass break up, four quarterback hurries and the game-winning sack for a safety in the victory over A&M-Commerce. With the game tied in the fourth quarter, Ennis blitzed and forced the Lion quarterback to run out of the back of the end zone for a 12-10 Colonel lead. Nicholls held on to the victory as Ennis and the defense allowed less than 300 yards of total offense.

Special Teams Player of the Week: Riley Callaghan, Southeastern – K – Fr. – Ashburn, Va. (Briar Woods HS)
Callaghan was a perfect 3-for-3 on field goals (46, 39, 28) and made his lone PAT in SLU’s 23-7 win over Northwestern State. In his debut season in Hammond, the freshman has connected on 12-of-14 field goals. This is his second SLC special teams player of the week award.