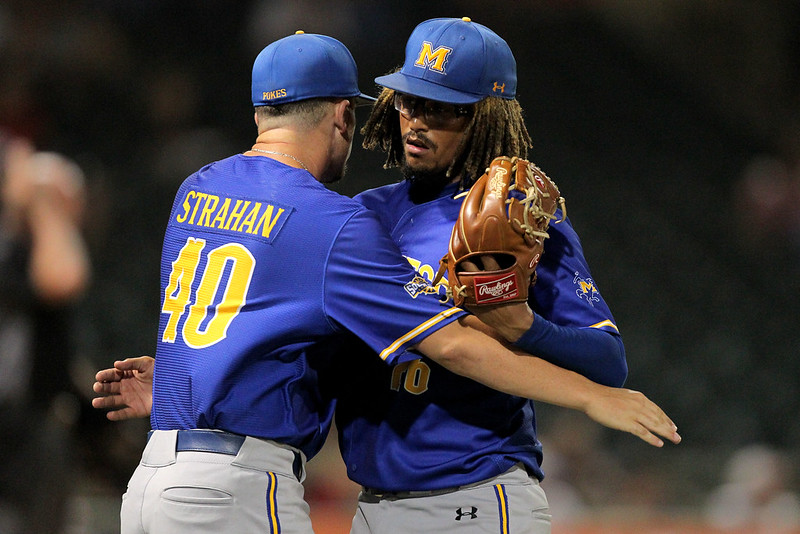 LAKE CHARLES – The McNeese Cowboys will be heading to Music City U.S.A. when on Monday, the team learned of its destination host for the 2019 NCAA Tournament – the Vanderbilt Commodores and Nashville Regional

The Cowboys (35-24) captured the Southland Conference’s automatic berth after cruising through the league tournament with a perfect 4-0 mark.

McNeese will be the No. 3 seed in the regional and will face No. 2 Indiana State (41-16) on Friday at noon CT. The game will broadcast live on ESPN3. The Sycamores won the Ohio Valley Conference Tournament to land the auto bid, and did so by taking two games from nationally ranked and No. 1 seed Dallas Baptist in the tournament championship.

The winner of the first round game will play the winner of No. 1 seed Vanderbilt (49-10), the tournament’s No. 2 overall seed, and fourth-seed Ohio State (35-25), the Big Ten Tournament champion.

“I told somebody last weekend, I didn’t care if we were being sent to Baghdad,” said head coach Justin Hill whose Cowboys have two league titles in the past three seasons (2017 regular season). “It’s a great regional with Vanderbilt as the host. We have a lot of respect for them but that’s not who we play first.

“We have Indiana State. It’s good to see them get rewarded for their great season. I don’t know much about them.”

With the title game win over UCA on Saturday night, Hill matched former coach Hubert Boales with 190 career victories as the second-winningest coach in school history.

Many thought Baton Rouge would be the likely destination just because of the proximity, but when the LSU regional was announced and the Cowboys were not listed, several cheers were heard from within the McNeese watch party that was held at Walk-Ons.

“They got it right,” said catcher Dustin Duhon. “They put the Cowboys in Nashville. It doesn’t matter who we play. We’re in the top 64, so anybody can win it on any given day. That’s the good thing about baseball.”

It wasn’t long ago when being in a position like this wasn’t even thought about.

At the end of April, the Cowboys were sitting in 10th place in the conference standings and looking from the outside as one of the eight for the league postseason tournament.

Then came a series win at Abilene Christian followed by a sweep over Stephen F. Austin. That ignited the Pokes who went on to win nine of their last 12 conference games and entered the tournament as the No. 5 seed.

From there, McNeese’s pitching staff dominated behind the arms of tourney MVP Aidan Anderson, Rhett Deaton and Will Dion.

In four games, the staff allowed just eight total runs, seven of those earned, while the Cowboys won their first conference tournament title since the 2003 season, which was also the last time McNeese played in the NCAA Tournament.

“It’s been really exciting,” said Anderson about the last month of play. “For some of us, it’s our last ride. It’s been surreal. To fight and come from way out of it, to winning the conference tournament, it’s huge for all of us.”

Vanderbilt is hosting the regional for the seventh time in program history as the Nashville Regional is paired with the Morgantown Regional, hosted by West Virginia. The winners of those two regionals will meet in a best 2-out-of-3 super regional matchup.

Tickets for the Nashville Regional can be purchased through the Vanderbilt athletic website.