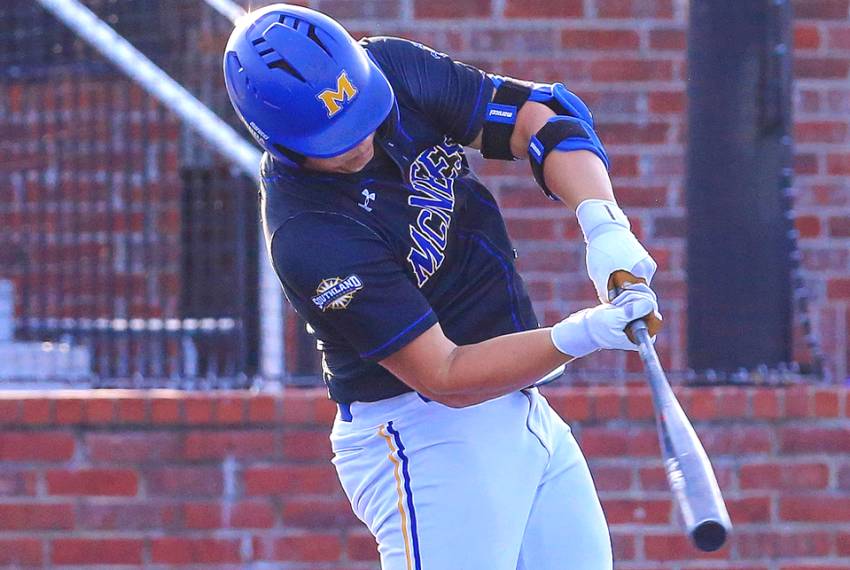 HOUSTON – Something about Cowboys in Texas.

For the second straight day, the McNeese Cowboys left no doubt.

The Cowboys scored two runs in the first and third, and 12 between the fourth and fifth inning.

“It felt good to get that first one, it had been a while since I got a hold of one like that, obviously it puts us in a good position going forward,” said Kade Hunter. (On blowing the game open) “I think a grand slam can take the wind out of anybody, four runs are a big blow when you have a guy like Burrell Jones on the mound who can make runs tough to come by for the opposition.”

Burrell Jones (3-0), who entered the game with two outs in the first, picked up the victory by firing 3.1 innings of relief while allowing just two runs and fanning five. Andrew Sheridan went the final three innings to pick up the first save of his career.

After a two-run homer by HBU that would even the score in the first, the Pokes would score the next 14 runs.

Kade Hunter and Brad Burckel hit back-to-back solo shots in the fourth to put McNeese up 4-2, the first pair of teammates to do so this season for McNeese. Burckel’s homer tied him for the team lead with eight.

Braden Duhon doubled in Reid Bourque and Andruw Gonzales in the fourth, Payton Harden and Kade Hunter each contributed a sac-fly in the frame.

The Cowboys used an 8-run fifth inning to blow the game open, scoring six of those before an out was recorded. Kade Morris and Harden both drove in runs with singles, Kade Hunter hit a grand-slam to dead-center, and Andruw Gonzales capped the inning off with a 2-run double.

With other conference results Friday, McNeese clinched a top 2 seed and hosting duties for the first weekend of the Southland Tournament.

With today's results, McNeese has clinched a spot as a host of next weekend's bracket play for the 2⃣0⃣2⃣2⃣ Southland ⚾️ Tournament❗️#SouthlandStrong💪 #GeauxPokes🤠 pic.twitter.com/oLI7rQRD3u

Next Game:
The Cowboys look to sweep the series Saturday. First pitch is scheduled for 1 p.m. on ESPN+.