The Greater New Orleans Sports Awards Committee, sponsored by the Allstate Sugar Bowl, selects annual award winners in a variety of categories; it also selects Amateur Athletes of the Month and each year’s Hall of Fame class. Overall, 23 individuals and two teams will be honored for their 2020-21 achievements at the Greater New Orleans Sports Hall of Fame Awards Banquet on July 24. Honorees are being announced over a period of 23 days, wrapping up with the Corbett Awards for the top male and female amateur athletes in the state on July 20 and 21.

McMain broke through and won the first basketball state championship in school history when it held off district rival Carver for the LHSAA Class 4A Boys’ State Championship. Corey Chest sank a free throw with 0.7 seconds left to lift the Mustangs to the landmark 49-48 victory in Lake Charles. Alex Hammond led McMain with 12 points and was named the game’s Most Outstanding Player; Chest added 11 points and seven rebounds.

“To college coaches out there, if you want a kid that will work and represent his family, come to McMain,” McMain coach Steven Kelly said. “The players at McMain have a role and make sacrifices and they have embraced the role and we are state champions. It’s all about the kids. McMain was 1-23 four years ago. We are going to enjoy our moment. My kids deserve everything that has happened through their sacrifice. We played the game the right way and we are state champions.”

The Mustangs had won a thriller over No. 3 Woodlawn-Shreveport (29-3) in the state semifinals as well. After trailing by as many as eight points early in the fourth quarter, McMain’s defense clamped down and it took a two-point lead on a Brandon Vigne free throw with 16.3 seconds to go. The defense came through again as it forced a wild shot that clanged off the side of the backboard.

“I’m going to say this as a joke,” McMain coach Steven Kelly said, “but we like playing from behind. Our first game of the year, we were down what, 17 points, and came back and executed. These kids always show heart.” 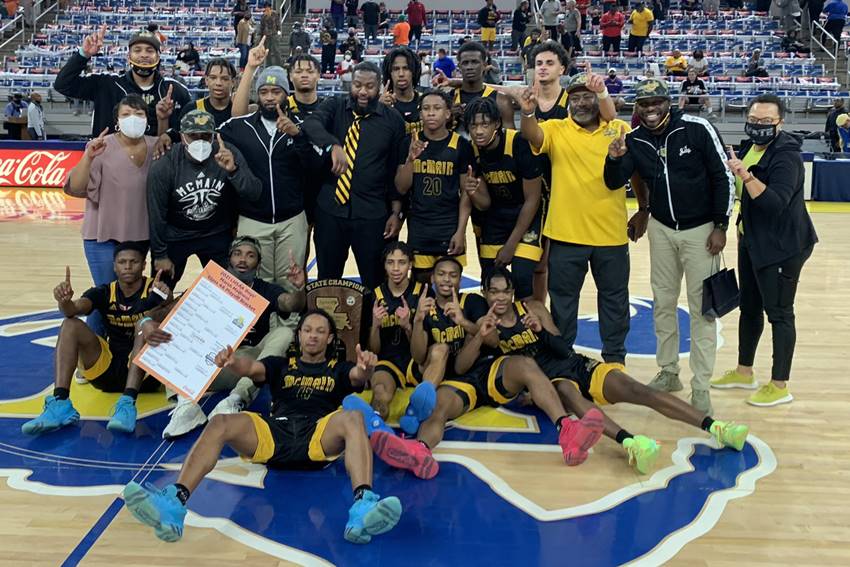 After years of struggling on the hardwood, McMain hired Kelly for the 2016-17 season and the Mustangs have made a steady climb. In 2019, they qualified for the state playoffs for the first time in years, then last year, they advanced to the state quarterfinals before falling to eventual state champ Peabody. This year, they made the full leap to state champions.

The other finalists for Greater New Orleans Boys’ Team of the Year were Jesuit Baseball, Pope John Paul II Soccer and St. Augustine Basketball. Despite posting a 6-6 record in the Catholic League, the Blue Jays baseball team was a perfect 25-0 in the rest of their games – that included a 6-1 victory over top-seed Byrd in the LHSAA Division I state championship game for their first title since 2011. The top-seeded Jaguar soccer team capped an impressive season with a 2-1 victory over Episcopal to capture the LHSAA Division IV soccer championship – the school’s first soccer state title. Pope John Paul had won its first three playoff games by scores of 7-0, 2-0 and 2-0, including a 2-0 decision over defending state champion Newman in the quarterfinals. St. Augustine used a pair of comeback efforts in the LHSAA Division I semifinals and championship to capture its first state championship since winning the Class 5A title in 2011 – the Purple Knights won the title with a victory over Scotlandville, which had come into the finals with a four-year winning streak, including back-to-back wins over the Purple Knights in championship games.

The Allstate Sugar Bowl will continue announcing its annual awards tomorrow (Wednesday) as the Greater New Orleans Girls’ Prep Team of the Year will be released at 10 a.m. (finalists will be announced at 11:30 a.m. today on Twitter (@SugarBowlNola).