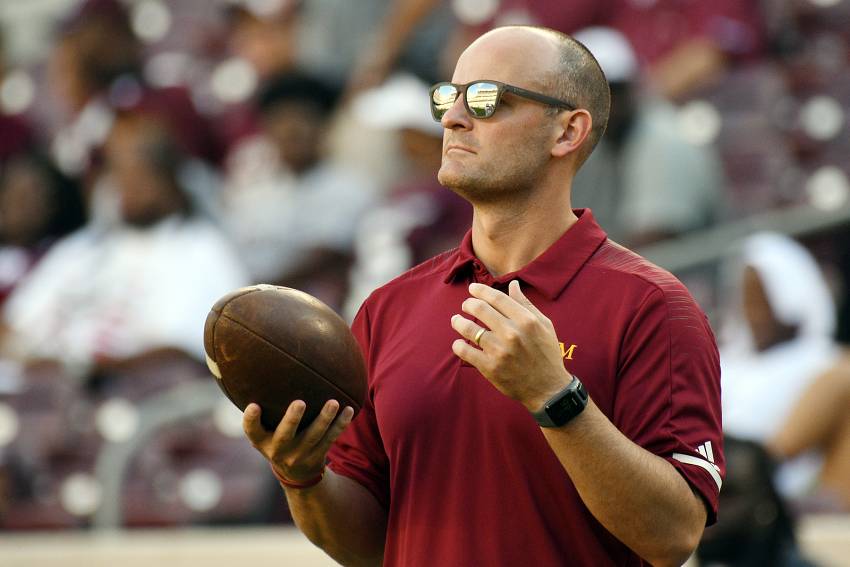 MONROE, La. – Matt Kubik, who served as offensive coordinator and quarterbacks coach for the Warhawks from 2016-19, has returned to ULM in the same roles under second-year head coach Terry Bowden.

Over his final three seasons during his first stint as play caller, ULM produced 500 yards or more total offense in 13 games (9-4 record). During the three-year stretch, the Warhawks averaged 181.7 rushing yards, 263.2 passing yards, 444.9 total yards and 30.7 points per game. During that period, the Warhawks amassed some of the Sun Belt Conference’s top totals, ranking third in passing yards (9,476) and fourth in total offense (16,016).

“Matt Kubik is one of the top offensive minds in college football,” Bowden said. “Matt has knowledge about the Sun Belt Conference as well as the ULM football program. During his first stint as offensive coordinator at ULM, his offenses produced some incredible numbers. Matt also has a proven track record in developing quarterbacks.

“With that kind of consistent, offensive production, we will not only win games, but we will put fans in the stands. With his knowledge and experience, Matt gives us the best opportunity to do just that. For our program to take the next step, we must create an exciting game-day experience that attracts large crowds to Malone Stadium.

“It’s a bonus that Matt knows this recruiting area well and already has established relationships with many coaches in the region.”

“I look forward to having the chance to build upon the momentum and excitement Coach Bowden generated for the ULM football program last season,” Kubik said. “It’s also an opportunity for me to get back to north Louisiana where I’ve spent 13 of the last 20 years.

“I look forward to reconnecting with high school coaches in the area and continuing to build those important relationships.”

Kubik also played an instrumental role in Caleb Evans’ development into one of the nation’s top dual-threat quarterbacks. Evans, who started 37 of 43 career games including 34 in a row from 2017-19, rewrote the Warhawk record book. He set ULM’s career record for total offense per game (271.7 yards) and rushing touchdowns (36). In addition, Evans finished ranked among ULM’s Top 10 all-time leaders in eight additional categories: second in total offense (11,681 yards), second in TDs responsible for (94), second in completion percentage (.605), second in passing yards (9,513), second in TD passes (58), third in pass attempts (1,252), third in pass completions (757) and sixth in rushing yards (2,168).

As a senior in 2019, Evans ranked second in the Sun Belt and 10th in the NCAA FBS in total offense, averaging 311.3 yards per game. He also finished third in the conference in passing yards, averaging 245.2 per game.

Evans became one of only three NCAA FBS quarterbacks in 2018 to put together multiple games with at least 290 passing yards and 100 rushing yards (vs. Georgia Southern and Troy), joining Oklahoma’s Kyler Murray (3 games) and Miami’s D’Eriq King (2 games). As a junior, he ranked second the Sun Belt in passing yards (239.1 per game) and total offense (297.1 ypg.).

Kubik’s 2018 playbook also showcased the talents of wide receiver Marcus Green, who earned All-Sun Belt First-Team honors, after leading team in receptions (50), receiving yards (855), touchdown receptions (8) and all-purpose yards (1,518). Green led ULM with 24 explosive plays (20-plus yards), including 12 receptions, nine kickoff returns, two rushes and one punt return. He ranked among the Sun Belt leaders in TD receptions (tied for second), receiving yards per game (tied for third at 71.2) and receptions (seventh at 4.2 per game). Green ranked fourth on the team in rushing with 20 carries for 193 yards (9.6 avg.) and one TD.

Following his four-year tenue in Monroe, Kubik spent the 2020 season as the offensive coordinator and quarterbacks coach at Southern Miss before transitioning to Columbia High School where he became offensive coordinator and helped the Wildcats to a 14-1 record in 2021 en route to claiming the Mississippi Class 4A Championship with a 22-21 victory over Senatobia in Hattiesburg. It marked Columbia’s second state title and its first since 1982. In addition to his coaching duties, Kubik served as project manager at Columbia High School, assisting in fund-raising activities, ticket sales and game-day operations.

Kubik originally came to ULM after a two-year stint as the offensive coordinator and quarterbacks coach at Stephen F. Austin (2014-15). During his tenure in Nacogdoches, Texas, a total of nine offensive players earned All-Southland Conference accolades, including a pair of specialty awards.

In his first season in charge of the Lumberjack offense, SFA averaged 32.7 points and 460.8 yards total offense while scoring at least 30 points in eight games in 2014. Under Kubik’s tutelage, Conque earned Southland Conference Newcomer of the Year honors after finishing with 3,359 yards total offense (2,733 passing and 626 rushing) and 29 total touchdowns (15 passing, 13 rushing and 1 receiving). Running back Gus Johnson was named the league’s Player of the Year after rushing for 1,683 yards and 23 TDs.

Kubik previously served as the wide receivers coach at Central Arkansas from 2011-13 where he helped the Bears to back-to-back playoff appearances in the NCAA Football Championship Subdivision (2011 and 2012).

His first collegiate coaching position came at Northwestern State in Natchitoches, Louisiana, where he worked four seasons, serving as both the wide receivers coach and recruiting coordinator from 2009-10 and running backs coach from 2007-08.

He began his coaching career at Catholic High School in Baton Rouge in 2006, working with the wide receivers.

He earned his bachelor’s degree in finance from Louisiana Tech in 2005. Kubik received his master’s degree in public administration from ULM in 2018.

He has also been a member of the Manning Passing Academy, the annual quarterback camp hosted by the Manning family.

Kubik and his wife Hannah, a Monroe native, have two daughters, Susannah and Georgia, and a son John Miller.