But the No. 1 overall pick in the NFL Draft had one more bit of college business to take care of Tuesday evening. The former Oklahoma walk-on and reigning Heisman Trophy winner accepted the Manning Award at a banquet at the Hilton Riverside.

“It’s been an unbelievable college career,” Mayfield said. “I had a lot of great teammates and support around me. Walking out here is kind of the final mark on it.”

Some of the other marks included the Walter Camp Player of the Year Award and the Maxwell Award.

Not bad for a guy who began his college career as a walk-on at Texas Tech before transferring to Oklahoma.

He completed 285-of-404 passes and had career-highs in passing yards and touchdowns and threw just six interceptions.

But it was more than statistics that led the Browns and the Manning Award selection committee to choose Mayfield.

“I think a word you hear a lot is savvy,” said Archie Manning, for whom the award is named along with his sons Peyton and Eli. “You can see he’s got great energy and you can see his passion. He kind of wears it on his sleeve. It probably even got him in heat a couple of times, but still, that’s who he is.

“I think when you play the game like Baker does your teammates rally around you. He’s an excellent leader with the way he carries himself. There’s probably a little chip on his shoulder. He’s walked on twice. It’s kind of an “it” thing with quarterbacks (and he has it).”

Mayfield is being counted on to help the Browns rebuild from a winless season in 2017. It’s unclear if he’ll be the starter when the Browns visit the New Orleans Saints in the Mercedes-Benz Superdome in the second game of the season Sept. 16. But, Manning said, Mayfield has the qualities necessary to lead a team.

“Your teammates have to follow you,” Manning said. “You’re not going to be a good quarterback if you don’t have some leadership qualities. There are different ways to skin that cat. People have different personalities. 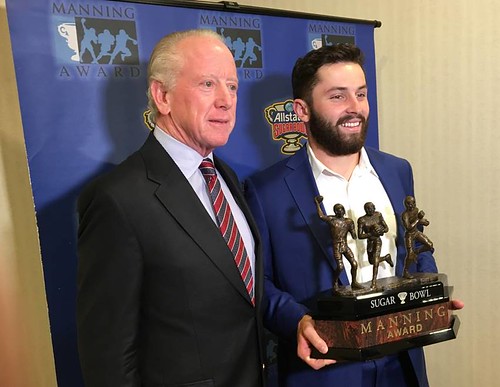 Unlike other annual college football awards, the Manning Award takes into account the candidates’ bowl performances, in addition to the regular season.

In college, Archie (Ole Miss), Peyton (Tennessee) and Eli Manning (Ole Miss) combined for more than 25,000 passing yards and 201 touchdowns, played in 10 bowl games and earned four bowl MVP awards. Archie was the No. 2 pick in the NFL Draft, and both Peyton and Eli were selected No. 1 overall.

Mayfield was a counselor at the Manning Passing Academy two years ago. He said because he has gotten to know the three Mannings, winning the award “means a lot more now than it would have before.”

When asked what distinguishes the Manning Award from his other accolades, including the Heisman Trophy, Mayfield said, “The name that comes with it.”