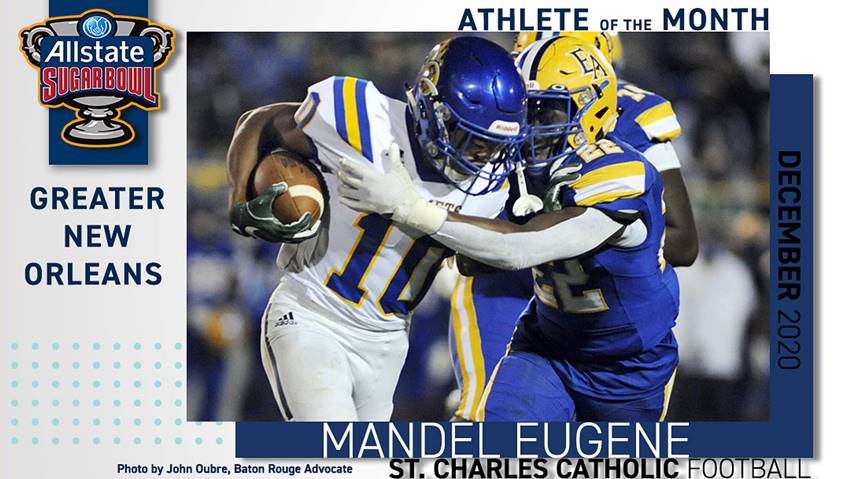 In the month of December, Eugene was simply outstanding in helping lead St. Charles Catholic to the Division III state championship game. In three games, Eugene had 22.5 tackles, including three sacks, seven tackles for loss, a blocked punt and an 82-yard interception return for a touchdown. A Tulane signee, Eugene was named the Most Outstanding Player for St. Charles Catholic in the Division III state championship game, after recording five tackles, including a sack, as well as the 82-yard interception return for a score – the only score for the Comets in a 12-7 loss to Lafayette Christian. Eugene was coached by the legendary Frank Monica, who announced his retirement on Monday.

Eugene was selected for the honor over three other nominees.

– Jaylen Forbes, a 6-5, 185-pound swingman for the Tulane men’s basketball team, averaged 17 points per game while averaging 38 minute per outing for the Green Wave in December. A transfer from Alabama, Forbes had 21 points on 8-of-12 shots to go with six rebounds and three assists against Grambling (12/19). He also had a 16-point, nine-rebound performance against Arkansas Pine-Bluff (12/12). The sophomore from Florence, Miss., leads the Green Wave in scoring with 15.3 points per game (eighth in the American Athletic Conference) while shooting 39.3 percent from three-point range (12th in the AAC).

– JerKaila Jordan, a freshman for the Tulane women’s basketball team, averaged 15.5 points, 5.2 rebounds, 3.7 assists, 1.5 steals and 1.2 blocks per game in a 3-3 month of December for the Green Wave. The 5-9 point guard led Tulane in scoring in four of the six games. She earned American Athletic Conference Player of the Week honors for Dec. 7-13 and was also named Conference Freshman of the Week for the second straight week. Jordan was also named the Louisiana Sportswriters Association Player of the Week for Nov. 30-Dec. 6. Jordan is averaging 14.3 points, 4.9 rebounds and a team-best 3.1 assists per game for the 7-3 Green Wave.

– Solomon Washington led the Craver boys’ basketball team to a perfect 8-0 December as the Rams improved to 12-0 for the season. The 6-7 junior averaged 16.4 points, 1.0 rebounds, 3.6 blocks, 2.8 assists and 2.5 steals per game. He closed the month with a 16-point, 18-rebound performance with multiple fourth-quarter dunks to break open a close game in a 71-60 defeat of St. Aug in the championship of the St. Augustine Christmas Classic. He also had a 21-point, 11-rebound effort in a close win over Helen Cox and a 19-point outing, including a key late-game dunk, in a win over traditional power Madison Prep.

The Allstate Sugar Bowl has established itself as one of the premier college football bowl games, having hosted 28 national champions, 99 Hall of Fame players, 51 Hall of Fame coaches and 19 Heisman Trophy winners in its 87-year history. The 88th Allstate Sugar Bowl Football Classic, which will feature top teams from the Big 12 and the SEC, is scheduled to be played on January 1, 2022. In addition to football, the Sugar Bowl Committee annually invests over $1.6 million into the community through the hosting and sponsorship of sporting events, awards and clinics. Through these efforts, the organization supports and honors thousands of student-athletes each year, while injecting over $2.7 billion into the local economy in the last decade. For more information, visit www.AllstateSugarBowl.org.