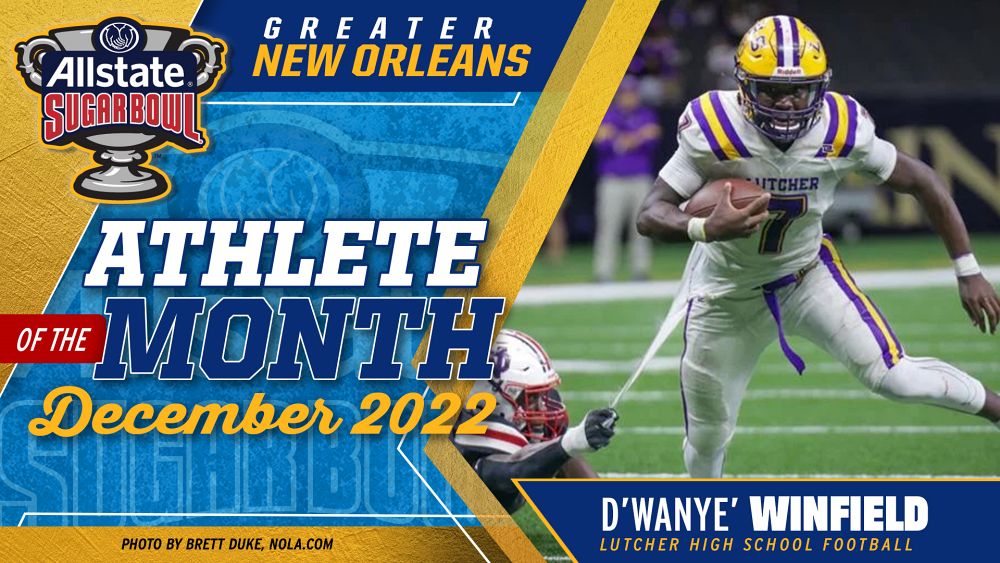 NEW ORLEANS – Lutcher High School quarterback D’Wanye’ “Lunch” Winfield has been selected as the Greater New Orleans Amateur Athlete of the Month for December. Monthly award-winners are selected by the Greater New Orleans Sports Awards Committee, sponsored by the Allstate Sugar Bowl. Winfield is the first Lutcher athlete to earn the honor since quarterback Gavin Webster was recognized in September of 2009.

Winfield put the Bulldogs on his back and carried them to a ninth state football championship as he accounted for 798 yards and nine touchdowns in the final two games of the season. In a 28-25 victory over North DeSoto for the Division II non-select championship on December 10, Winfield rushed 43 times for 130 yards a touchdown and completed 20 of 32 passes for 299 yards and three more scores. On December 2, in a 35-21 semifinal win at West Feliciana, he rushed 45 times for 331 yards and all five Bulldog touchdowns while completing three of five passes for 38 yards. On the game-clinching drive, he carried the ball 17 consecutive times, culminating with a 3-yard touchdown run.

“I just don’t know more of what you can tell a kid to have 2,000 yards passing, 2,000 yards rushing and score 70 touchdowns and lead his team to a state championship,” Lutcher coach Dwain Jenkins told WGNO Sports. “The last two weeks [of the season], he had 90 carries. He had every touch on offense in the state championship except for three.”

For the season, Winfield accounted for 4,657 yards and 70 touchdowns. He was named Metro Player of the Year by Crescent City Sports and WGNO’s Friday Night Football and the Class 4A offensive player of the year by the Louisiana Sports Writers Association. Winfield capped off the month of December by announcing his commitment to UL Lafayette at the stroke of midnight on New Year’s Eve.

Winfield earned the honor over a star college football player and a pair of women’s college basketball standouts.

The Allstate Sugar Bowl has established itself as one of the premier college football bowl games, having hosted 28 national champions, 102 Hall of Fame players, 52 Hall of Fame coaches and 21 Heisman Trophy winners in its 89-year history. The 90th Allstate Sugar Bowl Football Classic, which will double as a College Football Playoff Semifinal, is scheduled to be played on January 1, 2024. In addition to football, the Sugar Bowl Committee annually invests over $1 million into the community through the hosting and sponsorship of sporting events, awards, scholarships and clinics. Through these efforts, the organization supports and honors thousands of student-athletes each year, while injecting over $2.2 billion into the local economy in the last decade.