LSU’s recruiting class misses in recent years have added up 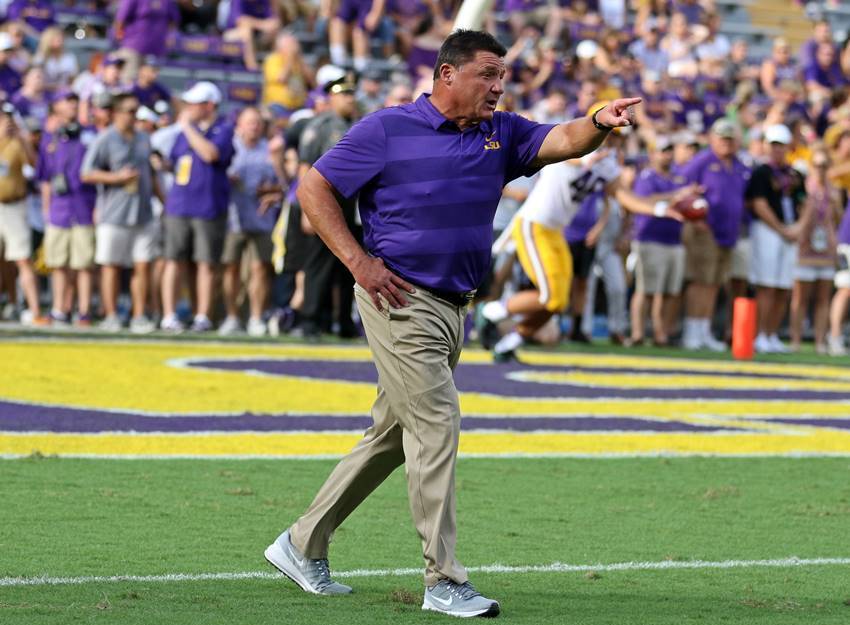 The LSU fan base is in mired among different levels of shock. The college football world is also taken back by the lack of success the Tigers have had since winning it all in 2019.

The Tigers are 8-7 since beating Clemson to cap a perfect season, one of the best in history.

To examine where the program is now, we have to look back a few years. While there is much to be said about the X’s and O’s, let’s focus on the Jimmies and Joes. Talent, depth and positional quality are determined by signing the right players.

Ed Orgeron took over the reigns as head coach at LSU as an interim head coach October 1, 2016, nearly five years to the day. His first real incoming recruiting class was 2017.

When you recruit a player, you’re not sure if he has a high ceiling or if he has already reached his peak. Is already as good as he is going to be? It’s a bit of a crap shoot.

The NCAA Transfer Portal has posed another dilemma that coaches have to negotiate. The comings and goings are plentiful. Is an in-coming player someone else’s problem or a great fit for your team’s needs?

I know the questions go beyond player personnel. Has the 5-5 season of 2020 spilled over into the present? Is it coaching? Is there a failure in development of players? Talent evaluation is always going to be questioned when a program underachieves. Is the staff rolling the dice on too many recruits?

It looks like a little bit of all of the above has factored into LSU recent woes. Recruiting is an inexact science.

The lifeblood of a college program is its recruiting, a strong suit of Orgeron. So how have the Tigers fared since he took control of the program? Let’s take a look. 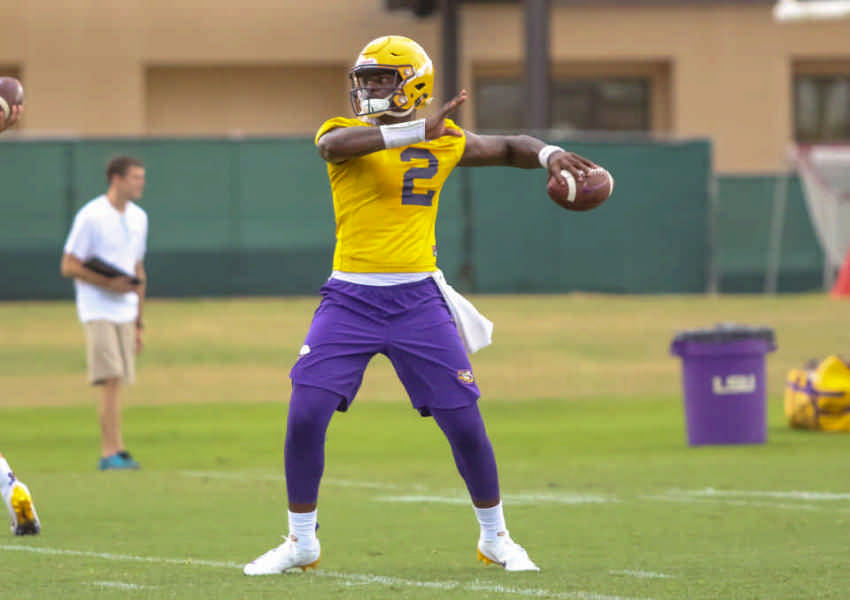 The 2018 class was ranked as a disappointing 15th in the nation. It started with 22 signees but was a disaster with 12 who either left or have been non contributors. Some of the stars of that class were Terrace Marshall (five-star), Ja’ Marr Chase (four-star), Damone Clark, Damien Lewis, Chasen Hines (four-star). But there were many more misses…

– DB Kelvin Joseph, four-star from Scotlandville, one season with Tigers but suspended in Fiesta Bowl preps. Transferred to Kentucky and eventually drafted by Dallas Cowboys in 2nd round of ’21 NFL draft.
– DT Jarell Cherry, four-star, Dallas, still on squad but has contributed 10 stops, 3.0 TFL, 1.5 sacks. in 10 games over three seasons.
– DE Travez Moore, four-star, Bastrop, No. 1 weakside DE in JUCO ranks when he signed, now at Arizona State where he has 6.0 tackles, 2.5 TFL and a sack this season.
– DT Davin Cotton, four-star Evangel, two games at LSU, recorded 3 tackles, now at Southern U.
– OT Dare Rosenthal, four-star from Ferriday, redshirt in 2018, three-starts in ’19, five-starts in ’20. Never seemed to get in step with the program. Now a starter at Kentucky and most likely future NFL player.
– ATH Kenan Jones, Berwick, La. two appearances at LSU, four-star recruit transferred to Nicholls following 2018 season.
– RB Chris Curry, four-star 5’11-215, two games at LSU, 91 carries, 336 yards. Now at Utah where he is backup and special teams.
– OC Cole Smith, three-star Pontotoc, Miss., freshman year at LSU but transferred to Mississippi State where he has made 12 starts.
– DT Nelson Jenkins, three-star, Plaquemine, one game appearance at LSU, sophomore starter at Southeastern La.
– NT Dominic Livingston, three-star from Houston, one game appearance vs. Rice. Transferred to Kilgore JUCO and since dropped off the map.
– TE Zach Sheffer, three-star Ponte Vedra Beach, Fla. no stats at LSU, in transfer portal.
– RB Tae Provens, three-star from Gurley, Alabama, two games at LSU with just four carries producing 13 yards. Has not played since 2018. Transferred to Alabama A&M in July 2021.
– LB Dantrieze Scott, Ferriday, spent 2018 at LSU before transfer to Grambling.

The 2019 signing class was rated as the fifth best in the country with 25 inked. Unfortunately, 11 of those either transferred or contributed little. There are some success stories, namely Derek Stingley, Jr., Trey Palmer, Jay Ward, Cordale Flott, Joseph Evans, Cade York and Quentin Skinner. Here are the misfires…

– TE T.K. McClendon, three-star from Wesson, Miss., one season at LSU caught one pass. Now a DE at Eastern Kentucky.
– DT Soni Fonua, three-star Mesa, Arizona, still on roster, just returned last week, has chipped in with 7 tackles and 1 TFL.
– LB Kendall McCallum, three-star Oxford, Alabama, two games in 2019, Now in transfer portal.
– OT Thomas Perry, three-star Teurlings Catholic, dad and grandfather played at LSU. As much help as LSU needs in the O-Line he has made two game appearances in 3 seasons.
– QB Peter Parrish, four-star Phenix City, Alabama. Did not see field at LSU. Transfer to Memphis where he is back up.
-LB Donte Starks, four-star from John Ehret, one of best in the state at his position in 2019 class. One season, no stats. Dismissed from team following arrest for possession of handgun and attempt to flee from police.
– TE/OL Ray Parker, four-star Ruston, one season. Dismissed after battery charge.
– NT Apu Ika, four-star, Salt Lake City, spent 2019 and part of ’20 with Tigers, producing 17 stops, 1.5 TFL. Now at Baylor where he has 6 tackles on season.
– DB Maurice Hampton, four-star Memphis, Tennessee. Arrived at LSU with lots of fanfare. Planned to play both football and baseball, played 13 games in football with five-starts. Made 15 appearances in baseball. It’s speculated that he will concentrate on his MLB prospects.
– OG Kardell Thomas, four-star Southern Lab The poster child for major disappointments in LSU recruiting. Many thought that he would not only be a starter, but would be All SEC within two years. Has played in one game in 3 seasons.
– LB Marcel Brooks, five-star from Flower Mound, Texas. One season at LSU as OLB. Now a WR at TCU where he has two catches for 16 yards this season and had two tackles on special teams last season.

The development of the 2020 class is still in its formative stages, although Eli Ricks, Kayshon Boutte, Ali Gaye, B.J. Ojulari, Jaquelin Roy and Max Johnson are already success stories. The jury is still out on others. I would guess that at least five to six may seek greener pastures following this season. There have been three departures to date…

– QB T.J. Finley, three-star from Ponchatoula, five-starts at LSU, transfer to Auburn where he backup to Bo Nix.
– DT Eric Taylor, four-star from Trussville, Alabama . Did not see field at LSU. Now in transfer portal.
– TE Arik Gilbert, five-star from Marietta, Ga., made 35 grabs for 368 yards and two TD’s as a freshman but transferred to Georgia where he has no stats. His issues are well-chronicled.

That’s four signing classes in all where 93 new Tigers were added but 31 of those have either left or flamed out.

Does LSU have enough talent to compete in the SEC? Yes, but perhaps not as much as we have repeatedly been telling ourselves.

But you’re seeing some elite talent on the field now and saying, “They’ve got to be good, right? This is LSU!”

The 2021 Tigers are not as bad as many think. How good can they be? I say they’ll qualify for a bowl before the season concludes. However, that low bar does not equate to success in Baton Rouge. 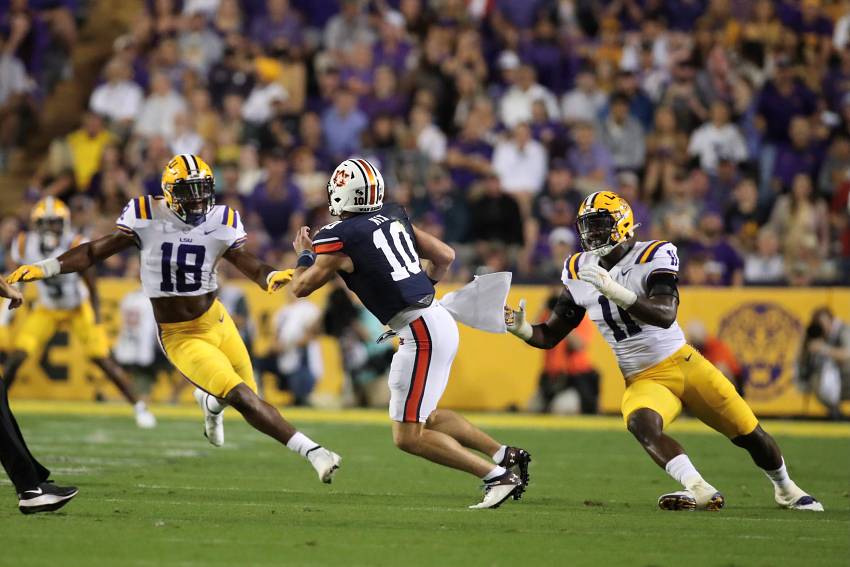 You never know how important experience is until you don’t have it. The same can be said about overall talent.