Ed Orgeron has vowed to keep recruiting intruders from around the country from poaching talent on Louisiana soil.  During the recent past, the foundation surrounding the Pelican state has shown cracks, allowing some of the top talent to escape LSU’s grasp.

This season, head coach Orgeron and the Tigers’ staff hope to solve that dilemma by plugging the holes. A winning season  with at least 10 wins would have a major impact on future classes.

Over the last 10 years, Louisiana has produced 44 players that ranked in the nation’s top 100 prospects collectively in their respective classes. LSU secured 29 of those recruits, with a 67.4 percent success ratio.

Bleacher Report’s Brad Shepard ranked Louisiana as one of the best states in the country producing top 100 talent. The players from the Boot rank behind only Texas, California, Florida and Georgia the past four signing classes.

In 2001, the Tigers struck oil, landing six top 100 players from Louisiana, with two additional top 100 talents from outside the state – No.  7 best player in the country in 2001, Marcus Spears (Southern Lab), No.  8 Marquise Hill (De La Salle), No. 19 Michael Clayton (Christian Life), No. 38 Andrew Whitworth (West Monroe), No. 90 Shyrone Carey (Shaw) and No. 95 Rudy Niswanger (Ouachita Christian). LSU grabbed the two other top 100 prospects in 2001 out of Texas – No. 13 overall ranked Ben Wilkerson and No. 64 Joseph Addai. The only player who escaped the Tigers from Louisiana was Evangel quarterback Brent Rawls, who signed with Oklahoma.

By comparison, the results from the 2017 class inside Louisiana look less impressive on paper. LSU landed only two state recruits on the top 100 while targets like No. 95 Neville DT Phidarian Mathis and Baton Rouge native, LB Dylan Moses, who finished his prep career at IMG, decided on Alabama.  The Purple and Gold did go outside the state to reel in No. 18 Jacoby Stevens (Tennessee), No. 37 K’Lavon Chaisson (Texas), No. 48 OT Austin Deculus (Texas) and No. 95 Kary Vincent (Texas) in ’17.

LSU bagged four to five top 100 players from the state in 2016, missing only No. 71 ranked player Shyheim Carter (Kentwood) who is now at Alabama. The quartet that became Tigers were No. 22 Kristian Fulton (Rummel), No. 23 Rashard Lawrence (Neville), No. 64 Michael Divinity (Ehret) and No. 68 NT Edwin Alexander (St. Thomas Aquinas).

In the 2015 signing class LSU retained 4 and missed on a pair from the Boot.  No. 28 WR Tyron Johnson (Warren Easton, now at Oklahoma State),No. 50 Donte’ Jackson (Riverdale), No. 70 Derrius Guice (Cath. BR), No. 91 Derrick Dillon (Pine). They did miss on Patterson WR  No. 92 Daylon Charlot , who signed with Alabama, but has since transferred to Kansas.   No. 85 rated player in the country, Evangel DT Jerry Tillery, has excelled at Notre Dame. 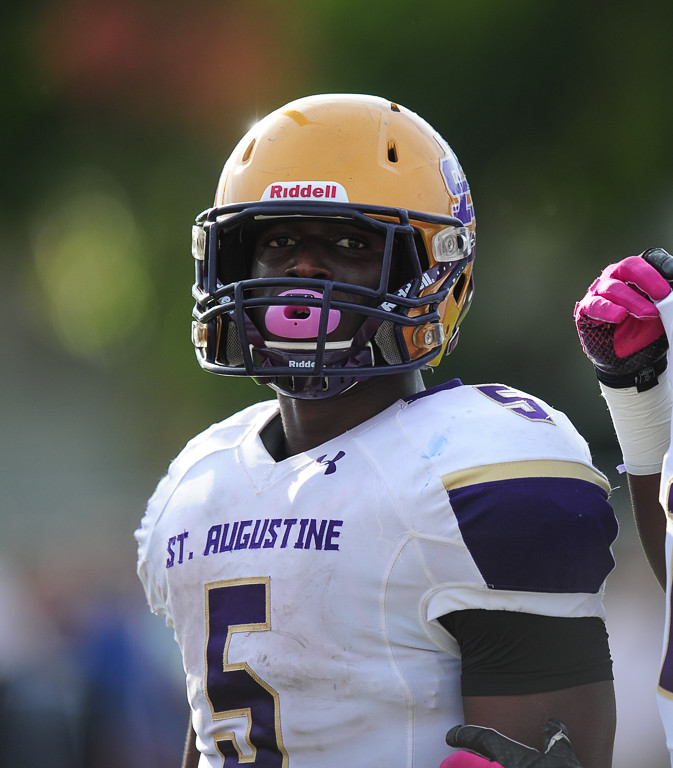 The 2014 class was a bountiful year in the Pelican State with no less than 10 of America’s top 100 seniors. LSU inked eight total including five inside the state. The big catch was No.  1 overall Leonard Fournette (St. Augustine) while others inked were No. 17 Malachi Dupre (John Curtis), No. 52 Garrett Brumfield (University Lab), No. 75 Brandon Harris (Parkway) and No. 83 Trey Quinn (Barbe). Harris and Quinn eventually transferred but even the top rated prospects do not always work out for you. You’d still rather have them than not.

Also in the ‘14 class from outside the state, LSI inked No. 32 overall player safety Jamal Adams (Texas), No. 41 Ed Paris (Texas, but with New Orleans roots) and No. 62 NT Travonte Valentine (Florida).  Then-head coach Les Miles and staff missed out on five from Louisiana – No.  4 OT Cam Robinson (West Monroe to Alabama), Speedy Noil (Karr to Texas A&M) No. 35 Gerald Willis (Karr to Florida, now at Miami), No. 50 Hootie Jones (Neville to Alabama) and No. 87 Cam Sims (Ouachita to Alabama).

Signed two, missed one, added two others from outside the state.  LSU landed No. 46 overall player CB Tre’Davious White (Shreveport) and No. 74 Kendell Beckwith (East Feliciana).  No. 83 overall Tim Williams (U-Lab) signed with Alabama. LSU did get No. 89 Frank Herron (Tennessee) and No. 91 Greg Gilmore (North Carolina) elsewhere.

A down year by Louisiana standards with just two players in the state on the top 100. LSU signed neither. No. 3 overall Landon Collins (Dutchtown) went to Alabama and No. 73 Shiro Davis (Woodlawn) ended up at Texas.  The Tigers did venture outside of the state to bag a pair of top players, No. 91 Kwon Alexander (Oxford, Ala.) and No. 93 Jeremy Liggins (Oxford, Miss.).

Of five from the Pelican State, LSU landed four – No. 8 Rueben Randle (Bastrop), No. 29 Chris Davenport (Mansfield transferred to Tulane), No. 44 Michael Ford (Leesville) No. 71 Josh Downs (Bastrop). The remaining player who left the Boot was No. 62 Janzen Jackson (Barbe) to Tennessee. LSU did secure three from outside the state – No. 3 overall Russell Shepard (Houston, Tex.), No. 9 Craig Loston (Texas) and No. 50 Sam Montgomery (South Carolina).

That the past. What about now?

There are six players from Louisiana in the country’s top 100 (24/7 list) for 2019. Make it seven if you include Baton Rouge native Noah Cain, the running back now at IMG Academy.

Highest rated player from the state is Ishmael Sopsher from Amite.  He’s the top rated defensive tackle in the land, and some have him slotted as the best overall player in the country.

The No. 19 player is Derek Stingley Jr., the stud cornerback at Dunham who announced he is a firm commitment to LSU this week.

No. 22 ranked in country is offensive guard Kardell Thomas,(6-4, 350) right in the LSU backyard at Southern Lab. The No.  1 rated guard is also currently committed to LSU.

No.  71 John Emery (6-0, 193), the shifty Destrehan running back, is a priority for LSU. Assistants  Mickey Joseph and Tommie Robinson are hoping to seal the deal for the Tigers.

Signing day is a long ways away, and we know there will be twists and turns in the recruiting process. Some prospects may change their minds several times as recruiters give their best pirches. Some prospects currently not listed on top 100 may leap frog others to find a spot as well.

We will have a clearer understanding if Ed Orgeron’s “wall” around the state is secure or needs fortifying.  History tells us that whoever wins the battle on the recruiting trail will ultimately prevail on the field of play. Just win and they will come. Rinse and repeat.