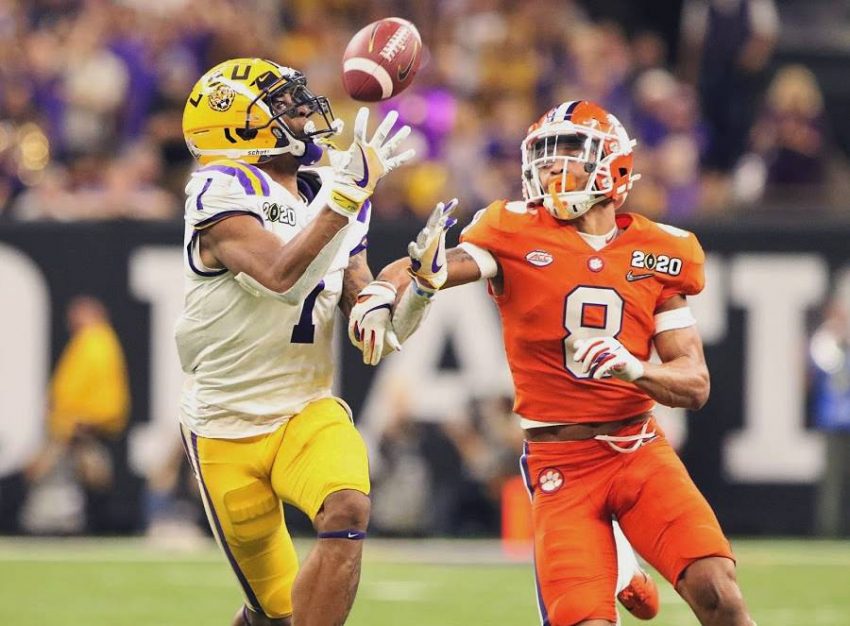 The Greater New Orleans Sports Awards Committee, sponsored by the Allstate Sugar Bowl, selects annual award winners in a variety of categories; it also selects Amateur Athletes of the Month and each year’s Hall of Fame class. Overall, 24 individuals and four teams will be honored for their 2019-20 achievements. Honorees are being announced over a period of 24 days, wrapping up with the Corbett Awards for the top male and female amateur athletes in the state on June 10 and 11.

A sophomore for the undefeated Tigers, Chase had a record-breaking 2019, setting the school record for single-season touchdown receptions with a national-best 20, shattering the previous record of 12 and also setting the SEC record. The Archbishop Rummel grad finished the year with 84 catches for an LSU and SEC-record 1,780 yards. He had nine 100-yard receiving games, including a 221-yard, 9-catch, 2-TD performance in the CFP National Championship win over Clemson and a 10-catch, 4-TD, 229-yard effort against Vanderbilt. For the season, he has 70 receptions for 1,457 yards (second in the nation), the second-most in school history. He was recognized with the Biletnikoff Award as the top receiver in the nation and was also a unanimous first-team All-American and All-SEC selection.

“It’s a dream come true,” Chase said after winning the national championship in the Superdome. “I had all my goals written down on my mirror. I accomplished every goal I wrote down. I got to come up with new goals now. This season has been ridiculous, man, that’s all I can say.””

The Greater New Orleans Sports Awards Committee has presented annual awards to amateur athletes in the region since 1958 – Chase is the fourth LSU football player in the last 40 years to be recognized, joining Corey Webster (2003), Tyrann Mathieu (2012) and Leonard Fournette (2016).

The other finalists for Greater New Orleans Male Amateur Athlete of the Year were Donovan Kaufman (Archbishop Rummel Football), Sully Laiche (Nichols State Football), William Loyd (Xavier University Basketball) and Christian Westcott (Lakeshore High Football). Kaufman, a senior linebacker, anchored the vaunted Raider defense that led Rummel to a perfect 13-0 season and the Allstate Sugar Bowl/LHSAA Division I state championship. The District 9-5A MVP and the state’s defensive MVP (as selected by the LSWA) posted 99 total tackles with four sacks, four interceptions, four forced fumbles and five pass breakups. Hailing from Gramercy and a graduate of Lutcher, Laiche was a one-man wrecking crew on the Colonels’ defensive line. The Southland Conference Player of the Year, Laiche was also a finalist for the Buck Buchanan Award as the top defensive player in the FCS. Loyd earned NAIA Second-Team All-American recognition after leading Xavier to its first Gulf Coast Athletic Conference (GCAC) Tournament Championship since 1996. The MVP of the GCAC Tournament, Loyd also was a First-Team All-GCAC selection and a GCAC All-Defensive honoree. Westcott closed a memorable senior season by being named the Louisiana Sports Writers Association’s Mr. Football as well as being named the Gatorade Louisiana Football Player of the Year and the LSWA Class 4A Player of the Year. completed 151 of 275 pass attempts for 2,790 yards and 35 touchdowns, and he rushed 198 times for 1,368 yards and 38 more scores.

The Allstate Sugar Bowl will continue announcing its annual awards on Wednesday, May 27 as the Greater New Orleans Boys’ Prep Team of the Year will be released at 10 a.m.