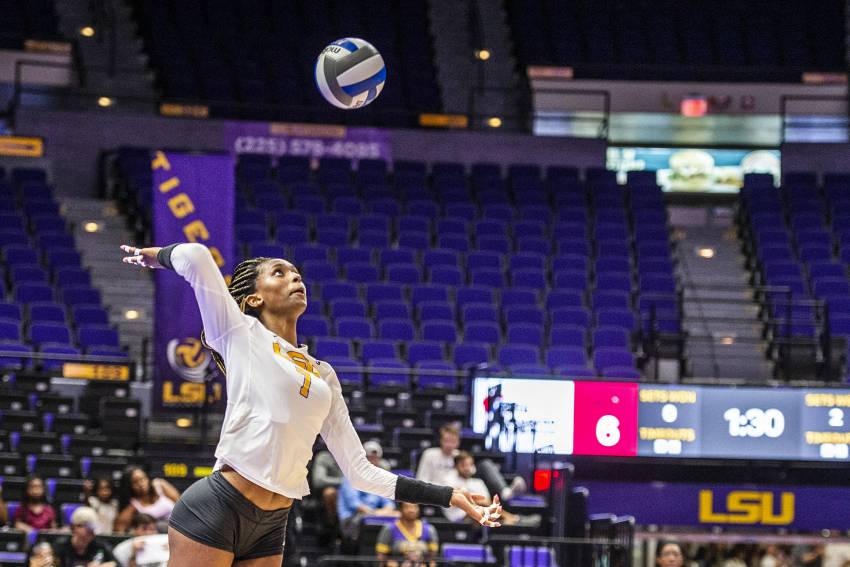 LAFAYETTE – It was another “Banner-ster” year for LSU’s Taylor Bannister.

For the third time in her career, the fifth-year senior and Tigers’ right side hitter was selected as the Player of the Year by the Louisiana Sports Writers Association (LSWA), which announced its 2021 All-Louisiana Women’s College Volleyball team on Thursday.

Bannister, who earned first-team All-Louisiana honors for an unprecedented fifth time, headlined a trio of LSU players who claimed specialty awards in voting by the state’s volleyball sports information directors. She was joined by teammates Raigen Cianciulli – the state’s Libero of the Year – and Kylie DeBerg – the state’s Newcomer of the Year.

Rounding out the specialty awards was Southeastern Louisiana University’s Cicily Hidalgo who earned LSWA Freshman of the Year honors while Loyola of New Orleans’ Jesse Zabal was selected as the state’s Coach of the Year.

Cianciulli was named the Libero of the Year for the second time in her career after recording 498 digs and finishing second in the SEC with 4.57 digs per set. A three-time SEC Defensive Player of the Week and AVCA All-South Region Honorable Mention selection, Cianciulli became the all-time dig leader in the Southeastern Conference (SEC) this season, finishing with 2,260 career digs.

DeBerg led LSU in kills (397), aces (39) and points (466.5) in her lone season with the Tigers after transferring from fellow SEC member Missouri. The 6-foot-4 outside hitter earned All-SEC and AVCA All-South Region honors and finished fourth in the SEC in aces per set (0.36), fourth in points per set (4.36) and sixth in kills per set (3.71).

Hidalgo, the second SLU player in as many years to be named the state’s Freshman of the Year, added to her list of accolades after being tabbed Freshman of the Year in the AVCA South Region and Southland Conference. The first-team All-SLC pick led the league in kills (412) and points (447.5) while finishing as the lone freshman to win SLC weekly honors.

The Opelousas, La., native posted a .218 hitting percentage and averaged 2.48 digs per set while finishing in the top-10 in both attempts (1,217) and kills (412) in program history. Hidalgo recorded 14 double-doubles and posted 20 or more kills in seven matches. She became first SLC player in five seasons to record 30 kills in a match, doing so in a Sept. 21 non-conference contest at Southern Miss.

Zabal, the Southern States Athletic Conference Coach of the Year, led Loyola to new heights after posting a 22-11 record and 12-2 mark in league action. She guided the Wolf Pack to their first-ever SSAC regular-season championship and first overall conference title since 2002.

After Loyola’s home venue suffered damage from Hurricane Ida, Loyola spent more than two weeks away from the city before practicing and playing home games in different gyms around the city. The team’s resiliency was featured on ABC’s “Good Morning America.”

Three setters – Siena DeCambra of Louisiana, Taylor Henigsman of Tulane and LSU’s Ella Larkin – were each honorable mention selections and were joined by Xavier’s Vivica Price-Spraggins and liberos Haley Hoang of Northwestern State and Simone Moreau of Loyola.

For more information about the Louisiana Sports Writers Association, visit the official website at www.lswa.info.