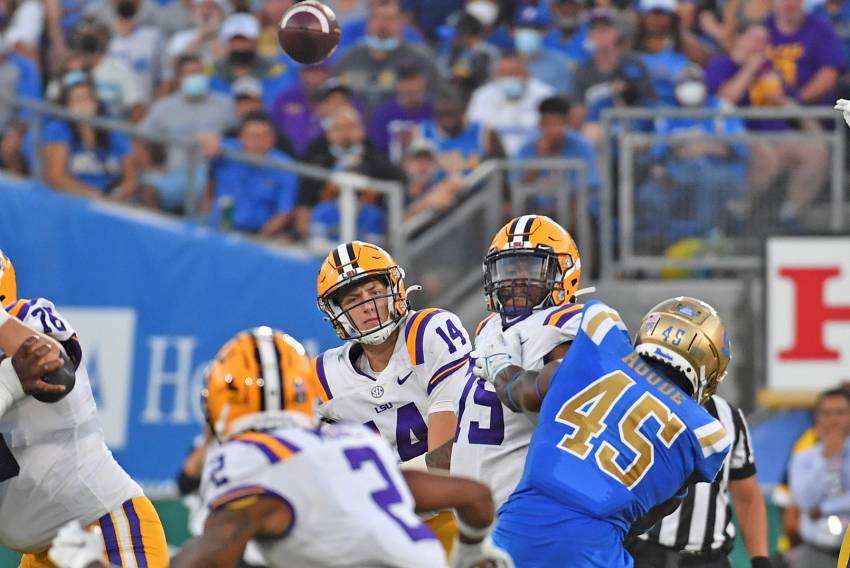 When last we saw LSU, the Tigers were rallying to win their final two games to have a break-even season as the first defending national champion to finish .500 or worse since 1950.

The promise of a new year, with new coaches and coming off of two wins to end last season provided large optimism for most observers, myself included.

Then, they made the long trek to the west coast.

It was Ed Orgeron’s first trip back after he served as an assistant coach and Interim head coach at USC, the biggest rival of UCLA.

It was the first-ever meeting between the Tigers and Bruins.

Yes, LSU was distracted by Hurricane Ida and had to do a lot of traveling.

So did Tulane and the Green Wave played extremely well against a better team than LSU played.

What we saw of LSU last season was back in full display Saturday night at the Rose Bowl.

LSU stunk like a skunk much of the way.

We have seen this before.

LSU was hampered at running back as John Emery missed the game with an injury. Sophomore Josh Williams was the second running back.

LSU had to burn a timeout early on offense with 9:49 to play in the first quarter.

After too much pressure bothering Max Johnson in the opening quarter, Jake Peetz made the adjustment and went to quick throws to end the first quarter and into the second quarter.

Right tackle Austin Deculus went down early in the second quarter. He was replaced by sophomore Charles Turner. Deculus did return later in the quarter.

LSU drove 63 yards in eight plays, taking 2:36 off the clock and took the lead on a three-yard touchdown pass from Johnson to Kayshon Boutte and it was 7-0 with 12:34 to play in the first half. Johnson was 3-for-4 for 45 yards and a score on the drive with the one incompletion a drop.

All that did was wake up the Bruins.

It took UCLA one play to get even as Thompson-Robinson hit tight end Greg Dulcich on a 75-yard touchdown pass. Dulcich, off of a play fake, bootleg, broke wide open. Major Burns had a chance to make the tackle but whiffed and it was 7-7 with 12:20 to play in the half.

Johnson then missed Trey Palmer wide open in the middle of the field that may have been a touchdown. It was hard to tell if the ball was tipped.

The Bruins then took their first lead of the game, driving 71 yards in just six plays with Zach Charbonnet rambling 12 yards for a score to make it 14-7 with 9:49 to play in the first half. It was a drive where receivers were open and where the UCLA offensive line blew the LSU defensive front off the ball.

LSU got a bit of a drive which stalled and Cade York booted a 52-yard field goal but it was negated by a false start.

Eli Ricks then came up with a big, diving interception. On the play, Ricks stayed home, reading the eyes of Thompson-Robinson, who did not see him. It was the fifth interception in just the 11th game for Ricks in his young career.

Boutte then had a ball go through his hands in the end zone, yet another missed opportunity.

LSU finished the first half with 12 carries for three yards rushing.

Johnson was 14-of-27 for 138 yards and a touchdown with several drops and some misses on his part.

LSU started the second half with three straight runs and made a first down.
Then, Johnson was blitzed again, made a terrible throw, well off the mark for Cole Taylor and Caleb Johnson intercepted it and returned it to the LSU 17-yard line.

UCLA took total advantage as Thompson-Robinson hit a wide-open Chase Cota with a 14-yard touchdown pass to make it 21-10 with 10:52 to play in the third quarter. On the replay, there was confusion at the linebacker level and Navonteque Strong totally released Cota, running a crossing route, and it was an easy score.

LSU had to respond and the Tigers did quickly. The Tigers drove 75 yards in four plays, taking just 1:56 to score as Johnson connected with Boutte on a 44-yard touchdown to cut the deficit to 21-17 with 8:56 to play in the third quarter. On the play, Boutte used the umpire to screen a defender, made the catch and had nothing but green space in front of him on another UCLA blitz.

The Bruins increased the lead to 24-17 on a 43-yard field goal by Nicholas Barr-Mira with 6:38 to play in the third quarter. The drive covered 50 yards in just six plays, taking 2:18 off the clock.

Left tackle Cam Wire left the game injured and Turner had to replace him.

UCLA then punished LSU, taking a 31-20 lead with 12:28 to play as Brittain Brown scored on a one-yard run to cap an eight play, 73-yard drive. The Bruins crushed LSU up front for big runs on the drive.

UCLA put the game away, driving 81 yards in eight plays, taking 4:34 off the clock with Thompson-Robinson hitting Kyle Phillips with a 45-yard touchdown pass to make it 38-20 with 6:31 to play in the game. The tackling on the play was downright awful.

To their credit, the Tigers did not quit, driving 73 yards in seven plays with Johnson hitting Boutte on a 45-yard touchdown pass to make it 38-27 with 4:08 to play in the game. Boutte made a defender miss and outraced another to the end zone.

The coaching staff was overhauled after last year’s massive disappointment.

It did not matter on this night.

One game does not a season make for this staff but count me as one who was thoroughly unimpressed.

This looked like the same LSU team we saw a year ago.

The Tigers could not run the ball.

Against a team that totally ignored the run and blitzed from start to finish, when did we see a screen pass?

Does LSU have any running back that can even handle that?

For that matter, the running back group at LSU is very ordinary.

The offensive line was poor. Nothing new there.

Receivers dropped passes you have to catch.

Simply put, the Bruins kicked the Tigers butts up front on both sides of the football. It is surprising that the final score was not more lopsided.

Now we know why the game opened with LSU as a 5.5-point favorite and the game closed with the Tigers just a 2.5 point favorite. The smart money proved to be smart.

LSU looked anything but smart.

The bright spot was Boutte, who picked up where he left off a year ago. Boutte finished with nine catches for 148 yards and three touchdowns.

Johnson, though not at his best or as good as he needs to be, had good moments and showed toughness as he was blasted all night long. He persevered and overcame the bad interception to play admirably, if not very well. Johnson completed 26-of-46 passes for 330 yards and three scores with an interception.

Ricks had a big-time interception.

If you can find anything else to be happy with as an LSU fan, please let me know. I don’t see it.

The result, as a result, was painfully obvious.

So is the fact that this once promising regime, which looked like it would sustain elite excellence over an extended period of time is now trying to figure out how to even have a winning season in the toughest conference in the land, a conference that LSU letdown in a big way Saturday night.

It is a new year but it was the same old LSU team that we saw a year ago and hoped would appear in the rearview mirror.

Instead, LSU is still chasing what we saw in 2019 and looked no closer to that magical mark than it looked a year ago and that is saying something. 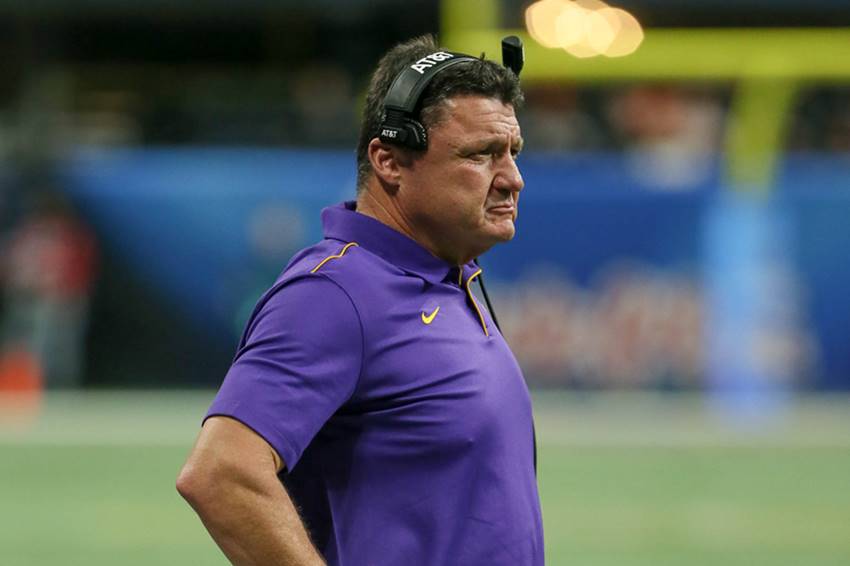 Has Ed Orgeron hired good coaches at LSU? Has he hired (signed) good players? What are the problems here?