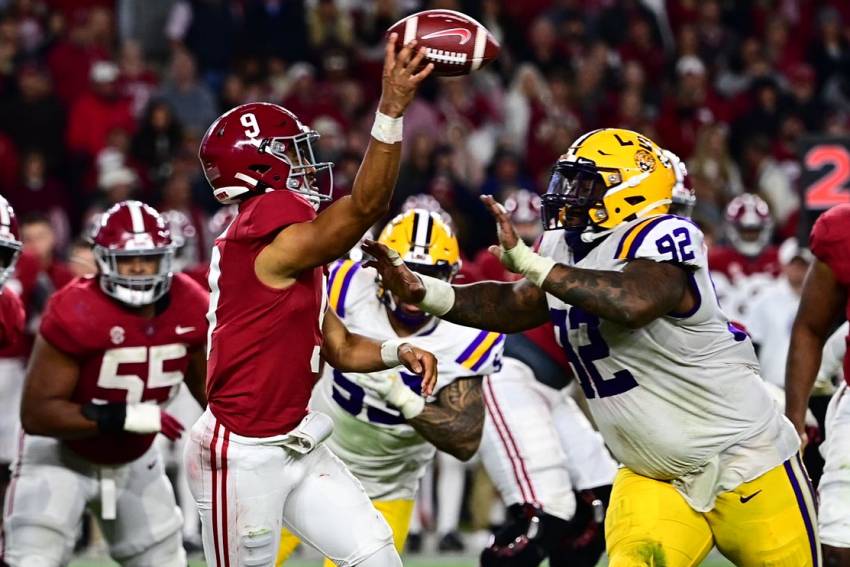 You are without your top three corners, your top wide receiver and many others.

You are on the road against the best program in the nation.

You commit a costly turnover just before halftime, leading to a touchdown by the vaunted opponent.

CBS thought so little of you that it opted for Auburn at Texas A&M, instead, passing on your game at No. 2 Alabama.

Perhaps CBS wishes it had stuck with Alabama and LSU.

In a shocking game, the Tigers came close to shocking the college football world but fell just short in a 20-14 loss at Tuscaloosa.

It was evident from the start that Alabama was not sharp or quite ready to play, perhaps thinking it was going to be easy against a beat-up team with a lame-duck coach.

Of course, close does not count and a win is a win and Alabama emerged victorious.

LSU served notice early in the game, running a fake punt jump pass which was successful.

That was the shape of things to come for a team playing with nothing to lose and everything to gain.

The key there is that the Tigers played and played hard, which was a clear question mark about the motivation of this team going into the game.

LSU led 7-0 after Max Johnson hit Brian Thomas with an 8-yard touchdown pass with 8:33 to play in the opening quarter.

The Johnson to Thomas TOUCHDOWN 🔥 pic.twitter.com/YBSYg7e8RN

After Alabama drove 77 yards on 12 plays to tie the game 7-7 with 2:52 to play in the half, LSU needed to make sure it kept the game at that score but the Tigers would not.

An interception on a tipped ball just before halftime led to an Alabama touchdown and it was 14-7 at halftime.

A lost fumble by Tyrion Davis-Price led to another Crimson Tide touchdown in the third quarter and it was 20-7.

At that point, I tweeted that the floodgates were ready to open.

Instead, LSU drove 89 yards in 14 plays with Max Johnson hitting Jack Bech on an 8-yard touchdown pass to cut the lead to 20-14 with 2:27 to play in the third quarter.

Down by the same score, LSU reached the Alabama 8-yard line with 6:51 to play in the game.

A fumble by Max Johnson was overruled, properly, by replay, as his arm was coming forward.

On fourth down, Ed Orgeron opted to go for it but a pass by Johnson was high and incomplete into coverage, intended for Trey Palmer. Orgeron passed on a sure field goal by sure-footed Cade York.

Still, the Tigers were not finished.

Cam Lewis, in his sixth year at LSU, blitzed, sacked Bryce Young, who fumbled and Jaquelin Roy recovered at the Alabama 42-yard line.

The offense simply failed, doing nothing on four downs, giving Alabama the ball back at its own 41-yard line with 2:36 to play in the game.

The defense got another stop, giving the offense the ball back with 50 seconds remaining and no timeouts at its own 38-yard line.

On the first play, Johnson held the ball too long, yet again, and did the one thing he could not do with no timeouts, taking a sack. It cost LSU valuable yards and even more valuable time.

On the final play, a jump ball throw to the end zone was batted down.

It would not have counted, anyway, as LSU was flagged for a personal foul.

Once again, the Tiger offense did not do its part, sealing the win for Alabama, who basically escaped on a night when the Crimson Tide were ready to be had.

It was encouraging to see an LSU team fight so hard.

It was discoursing to see an LSU team lose to Alabama again when it had a clear shot to win.

The numbers for Johnson looked half decent as he went 16-of-32 for 160 yards with two touchdowns and an interception.

The play of Johnson was not good enough.

He committed a turnover he could not afford and held the ball too long on several plays, including the sack at the end of the game.

Johnson, under pressure throughout, missed a couple of throws he had to make.

Johnson is a capable player but he has not progressed to become the outstanding player that many thought he would be.

Whoever takes over as head coach will have a decision to make with promising Garrett Nussmeier, who has a very good arm and is a gamble, ready to challenge and the expected arrival of a very talented player in Walker Howard.

It was truly a shame for the LSU defense to lose as it played inspired, superb football throughout. As mentioned, two scores came off LSU turnovers.

Alabama, with its vaunted running game, rushed for just six yards in the game, an incredible statistic, and LSU still lost.

Left on the schedule are Arkansas, ULM and Texas A&M.

There is surely one win in that mix.

Is there a second or third win?

A great effort Saturday night did not produce a great result.