LSU lets one slip away against Air Force, 6-5

LSU will return for the final game of its opening weekend at 5 p.m. CT Monday against Louisiana Tech. The game will be streamed live on SEC Network+ through WatchESPN.com and the app.

Ty Floyd (0-1) was charged with the loss after allowing three runs on one hit and walking two.

Joe Martinez III (1-0) earned the win for Air Force after facing two batters and striking out one. Paul Skenes earned the save after closing the game for the Falcons. He gave up one run in the ninth.

Air Force tied the game in the fourth after a pair of errors in the infield. With runners in scoring position, designated hitter Bryadon Altorfer grounded out to score a runner. In the next at bat, Gabriel Garcia scored after a fielding error.

The Falcons took the lead in the top of the sixth on another fielding error. After a leadoff single and stolen base, centerfielder Blake Covin scored on the error to give Air Force a 4-3 lead.

First baseman Tre’ Morgan and Cade Beloso opened the eighth inning with back-to-back walks and advanced to second and third on a wild pitch. Sophomore Zach Arnold then roped a one-out single to left field to help give LSU a 4-3 lead.

Air Force responded in the top of the ninth inning with three runs to take the 6-4 lead. Floyd gave up a pair of one-out walks and an infield single to load the bases. Aaron George then gave up consecutive walks and a sac fly to allow the Falcons to plate three runs.

Freshman Dylan Crews made it a one-run game in the top of the ninth with a solo home run to left field, but it wasn’t enough for the Tigers.

Landon Marceaux started for the Tigers and pitched five innings. The junior allowed two hits and struck out four in his 2021 debut. He was charged with two unearned runs. 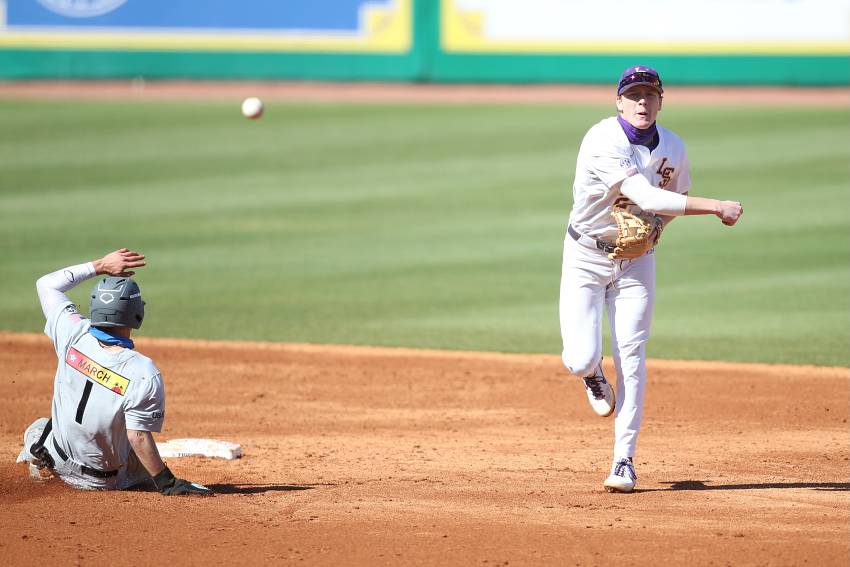 No. 7 LSU opened the 2021 season with a 6-1 victory over Air Force, Saturday afternoon at Alex Box Stadium, Skip Bertman Field.