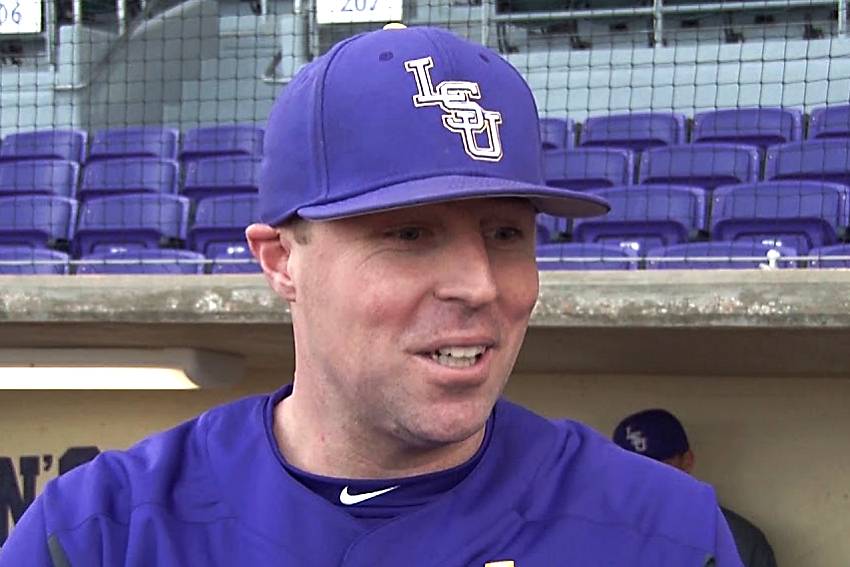 Smith comes to UVU after spending the last two years as the hitting coach at national power LSU. He also holds assistant coaching stops at Tulane, Notre Dame, Santa Clara and Virginia, and was the former head coach at Lower Columbia College for four seasons.

Smith has been the hitting coach at national power LSU for the past two seasons and is preparing to begin NCAA Tournament play on Friday in the Eugene Regional, the program’s ninth straight trip to the postseason. He has had assistant coaching stops at Tulane, Notre Dame, Santa Clara and Virginia before making his way to Baton Rouge. He was also the head baseball coach at Lower Columbia College in Longview, Wash., for four seasons from 2014-2017.

“Eddie Smith is a proven winner with a magnitude of experience at the highest levels of college baseball. He has a history of success everywhere he has been and has learned from some of the most successful head coaches in the country,” UVU Director of Athletics Dr. Jared Sumsion said. “Coach Smith has helped build national championship caliber teams and will have an immediate impact on our program. He has an energetic desire to help our student-athletes succeed both on and off the field. Eddie has strong regional roots in the West and expansive ties all around the country. His ability to recruit elite players is obvious by the success of the programs he has worked with. I am happy to welcome Eddie and his wife, Jennifer, to the Wolverine family.”

Smith helped the Tigers to a 12-5 record and a .273 team batting average in the COVID-shortened 2020 campaign. This season, LSU is currently 34-22 and ranks 12th in the country with 80 home runs as a team and is also among the nation’s leaders in runs scored.

“It is a great honor to be the baseball coach at Utah Valley. This program has the foundation to compete at a very high level and we can’t wait to get to work,” Smith said. “We will build the program around high character individuals who are committed to playing a tough brand of baseball. We look forward to having a baseball team that will make the community proud!”

Prior to coaching at Tulane, Smith spent four seasons as the head coach at Lower Columbia College. At LC, the Red Devils won three straight West Region titles and Northwest Athletic Conference championships in 2015 and 2017 under Smith. In 2015 he was named the ABCA National Coach of the Year for his level and compiled an impressive 146-49 record (.749 winning percentage) as the head man at Lower Columbia. From 2015 to 2017, his LC Red Devils also posted the third-best ERA of any program at any level in the nation, and he was also named the conference coach of the year twice during his time at Lower Columbia.

Smith began coaching as an assistant at Virginia for five years (2007-2011), where he helped the program emerge as a national power, winning three ACC Championships and reaching the College World Series in both 2009 and 2011. After his time at Virginia, he served a year as an assistant coach at Santa Clara in 2012 as well as his alma mater of Notre Dame in 2013.

Overall, during his coaching career, Smith has helped his teams to a pair of College World Series appearances and six conference championships in the past 11 seasons. He has also helped his squads to a 312-174-1 record during his nine seasons as an NCAA Division I assistant coach and has coached alongside two former coaches that have won national championships in Paul Mainieri at LSU and Brian O’Connor at Virginia. An impressive tally of 60 of his former players have been selected in the MLB Draft, which includes four in the first round and 15 that have reached the big leagues.

He has also spent a pair of stints with USA Baseball as an assistant coach with the 17U and 14U National Team Development Program in the summers of 2015 and 2018.

As a player, Smith spent two years at Notre Dame, where he helped the Fighting Irish to Big East Conference Championships and NCAA Tournament Appearances in both seasons. As a senior in 2006, the team was ranked as high as No. 8 in the country. He received his bachelor’s degree in Spanish and earned All-Big East Academic honors.

His college playing career began at Centralia (Wash.) Community College, helping the Trailblazers set a school record for wins in 2004. He was honored as a NWAC Red Lion Scholar Athlete that year and was inducted into the Centralia College Sports Hall of Fame in 2012.

Smith is married to the former Jennifer Cromwell. A 2010 graduate of the University of Virginia, she was a three-time All American and helped the Cavaliers win the National Championship her senior year in rowing.