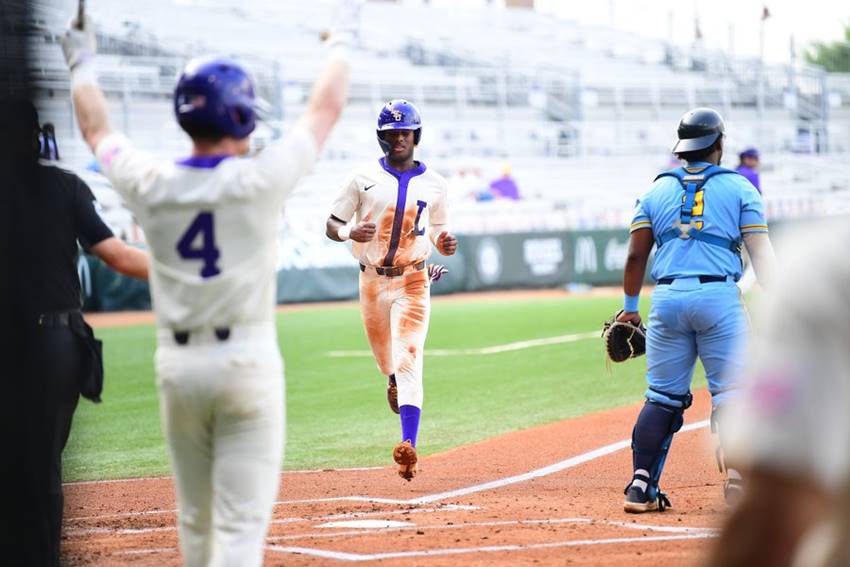 The Tigers return to action at 6:30 p.m. CT Thursday when they open a three-game SEC series at Auburn. Thursday’s game will be televised by ESPNU, and it can be heard on affiliates of the LSU Sports Radio Network.

Crews, Bianco and designated hitter Cade Beloso each contributed two RBI Monday to pace the Tigers’ 11-hit output. Freshman left-hander Javen Coleman (2-0), the second of eight LSU pitchers, was credited with the win as he worked 1.1 scoreless innings with no hits, no walks and three strikeouts.

Southern starting pitcher Christian Davis (0-4) was charged with the loss as he allowed two runs on three hits in two innings with one walk and no strikeouts.

“It was kind of a workmanlike effort today, we got a few big hits and got the job done,” said LSU coach Paul Mainieri. “There were a lot of good things that happened out there; I thought Javen Coleman getting back out on the mound was important, and he threw the ball well. It was a good, solid victory.”

LSU opened the scoring in the first inning when first baseman Tre’ Morgan doubled and scored on a double by leftfielder Gavin Dugas. The Tigers extended the lead to 2-0 in the second when Bianco walked and then scored on catcher Alex Milazzo’s triple.

Bianco’s two-run homer in the fourth – his fourth dinger of the year – gave the Tigers a 4-0 advantage.

After Southern narrowed the margin to 4-2 in the top of the fifth, LSU responded with four runs in the bottom of the frame. Crews delivered an RBI double, shortstop Jordan Thompson provided a sacrifice fly, and Beloso lined a two-run single to highlight the outburst.

Crews’ 11th homer of the year, a solo shot, increased the lead to 9-2 in the sixth, and the Tigers added a run in the seventh when third baseman Cade Doughty tripled and scored on wild pitch.

LSU senior pitcher Matthew Beck, who has been sidelined for most of the season by an elbow injury, smacked a pinch-hit single in the eighth inning in his first career collegiate at-bat.

“Certainly, the highlight of the game was Matthew Beck’s pinch hit,” Mainieri said. “That was a rip to right field; those pitchers just make hitting look so easy, it’s amazing. Matthew is a wonderful young man, the type of young man you’d be proud to have as a son.

“He’s just one of the best kids I’ve had the privilege of coaching, and he’s been a great motivator for our team all year. I just wanted to give him the opportunity to get out there in front of a crowd at least one more time, and it was a great moment for Matthew and all of his teammates.”

Notes on the Tigers
LSU is No. 24 in the most recent RPI rankings, and the Tigers are ranked No. 1 in strength of schedule, having played the most difficult schedule in the nation through the first 11 weeks of the season … LSU has 63 home runs in 43 games this season; with one more home run, LSU will tie its total for the entire 2019 season; the Tigers hit 64 home runs in 66 games in 2019 … for the first time this year, LSU played without capacity restrictions in Alex Box Stadium, Skip Bertman Field for all three games of the Tigers’ series versus Arkansas.

Ma’Khail Hilliard
Senior right-hander Ma’Khail Hilliard, making his first start in an SEC game since 2019, defeated top-ranked Arkansas on Saturday … Hilliard worked five innings and limited the Razorbacks to one run on two hits with three walks and three strikeouts … he fired 79 pitches, 51 for strikes, and improved his record to 4-0 this season … Hilliard also earned a win over Grambling State Tuesday in a starting role, limiting GSU to no runs and one hit in three innings with no walks and five strikeouts … for the entire week, Hilliard was 2-0 with a 1.12 ERA in eight innings, allowing one run on three hits with three walks and eight strikeouts.

Garrett Edwards
Freshman right-hander Garrett Edwards shut out top-ranked Arkansas in three relief innings on Saturday, helping to boost LSU to a 5-4 victory … Edwards started the sixth inning in relief of Ma’Khail Hilliard and blanked the Razorbacks through the eighth inning, retiring nine of the 10 batters he face … Edwards allowed just one hit with no walks and two strikeouts, throwing 43 pitches – 28 for strikes … Edwards also fired one scoreless inning on Tuesday versus Grambling State, allowing no hits and no walks with one strikeout.