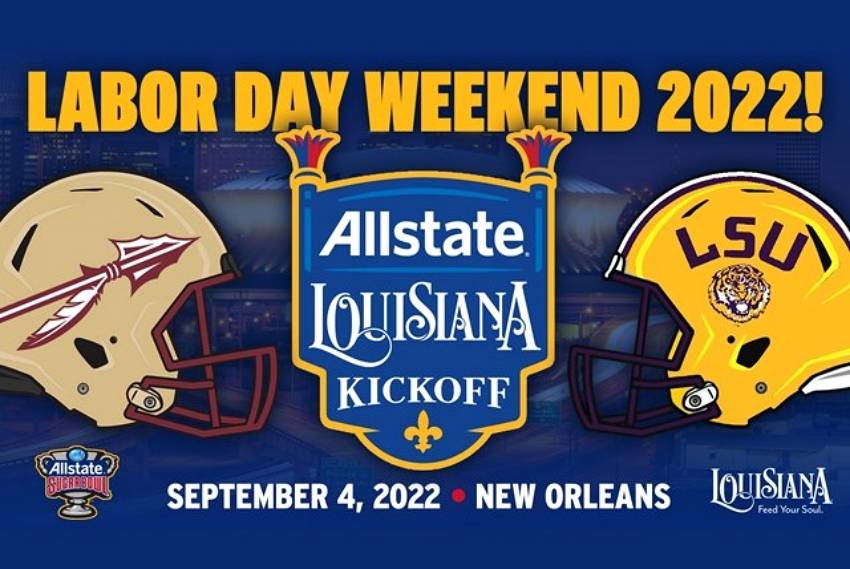 National Showdown between Florida State and LSU in New Orleans Will Air Live on ABC at 6:30 p.m. Sunday

NEW ORLEANS – The Allstate Louisiana Kickoff between LSU and Florida State in New Orleans on Sunday, September 4 is sold out. The game will be televised nationally by ABC. Kickoff is scheduled for 6:30 p.m. at the Caesars Superdome. The game is being hosted by the Sugar Bowl Committee in partnership with the Louisiana Office of Tourism and Allstate.

Fans still seeking tickets for the game are encouraged to explore options on the secondary market.

“We’ve been excited about this match-up from the start,” said Jeff Hundley, the chief executive officer of the Sugar Bowl. “And the main reason for that excitement was the passionate fan bases of both teams. LSU and Florida State really stepped up, so we’re expecting a great atmosphere and a highly competitive game Sunday night in the Superdome.”

In addition to the evening’s football game, Caesars Sportsbook Tailgate Town will bring top-notch entertainment to fans during the afternoon leading up to the game. The official Allstate Louisiana Kickoff pregame party is free and open to the public; it opens at 3 p.m. and will feature food, interactive games and entertainment – lots of entertainment! DJ Rob Nice will host the afternoon’s activities – a New Orleans native, Nice has toured the country with artists such as Nelly and Lil Wayne and has served as emcee for the New Orleans Pelicans while also hosting the NBA All-Star game 11 times.

Sugar Shaker, an international special event band, will be the first group on the Champions Square stage. “The Shakers” are known as one of the best party bands in the country with a high-energy show and a non-stop song list.

Continuing the afternoon’s entertainment will be a special head-lining performance from three-time Grammy nominee Sean Ardoin, a high-energy Kreole Zydeco legend from Lake Charles, La. Ardoin, who has written and produced 19 internationally released CDs, has performed throughout the world including highlight performances at Carnegie Hall, on Good Morning America, on NCIS New Orleans, and at the New Orleans Jazz and Heritage Festival. Ardoin, who comes from a long line of respected artists, represents the roots and progressive future of Louisiana’s Kreole Zydeco sound like no other artist. A rare combination of tradition, talent and creativity, he started a new genre called Kreole Rock and Soul in order to be able to express his artistry without the confines of the traditional zydeco idiom.

Caesars Sportsbook will also host an activation for fans ages 21 and over, and guests can also take photos with a custom wrapped John Deere tractor courtesy of Sunshine Quality Solutions.