LSU enters next phase of concern as negative vibes increase

As if LSU’s faithful fans are not miserable enough right now, there are a few who not have even given much thought that things could actually get even worse. And I’m not referring to the remaining schedule.

Yes, the Tigers face a daunting upcoming slate with Florida, Ole Miss, Alabama, Arkansas and Texas A&M lying in wait, but did you overlook the fact that early signing day arrives December 15th?

For the long-term health of a program that looks sickly, that rapidly-approaching date looms large.

Recent history has proven that the trend is to fill as many of your allotted 25 slots with early signings as you can before filling out the remaining blanks down the line. LSU may have to do just the opposite, the way things appear now.

The prospects for Ed Orgeron and his staff returning currently appear to be between very slim and none. It’s hard to recruit when a lameduck status is known or assumed both far and wide.

Sine the job of the recruiter is to forge a bond with the prospect, if LSU losses continues to mount, what will be the pitch assistants will pass along to potential signees?

“Stay with the Tigers until we find out who will be your next coach? Maybe I’ll still be here after that.”

It’s an uncomfortable and compromising position for coaches and recruits alike. The prospect, along with his family, face a life changing decision. They will want as much certainty and security as they can get. It is a tough spot for the current 2022 commitments or even seriously interested targets. Does one decide to wait until February 2? Will a change be made in time for the December signing period?

LSU’s final game is November 27. Would a new staff be able to handle damage control in time to salvage a solid recruiting class? The transfer portal could play a much more prominent role in this year’s class than previously expected.

Having just experienced yet another hurricane, folks around here know that you prepare as much as possible for the impending disaster before it approaches. We also understand, from previous experience, that you batten down the hatches and make subsequent plans to deal with the aftermath.

Some of them, like repair crews and builders, patiently wait until it’s time to head to those disaster areas to help out and even make extra money. Sadly, there are also those who look to take advantage of others in need.

This season won’t conclude for another month and a half, but if you listen closely, you can hear the humming of the engines of those “fixers” heading to Baton Rouge to take advantage of the LSU football program.

Poachers from across the country know the talent the Tigers possess on their roster. They know the type of players that are attracted to the LSU program. They could find gold in the transfer portal. They will do all within their power to turn the heads of commitments like quarterback Walker Howard and others.

It’s crunch time at LSU. Can the Tigers pull of the unthinkable and win at least four of the remaining games? The oddsmakers will tell you that’s a longshot.

I’ll be willing to wager that Athletic Director Scott Woodward already has an alternate plan in place. Even though there is no current opening, the feelers are out there. Under the circumstances, it would be malpractice if they were not.

It’s time for loyal fans to stop wishing that an interim coach can provide temporary relief or dreaming ahead to Will Wade’s upcoming basketball season or the highly anticipated debut of Jay Johnson as baseball coach.

Supporters of the Purple and Gold need to back the current Tigers on the field, helping the image of the program in this rough time. It can help with the future, one that does not have to be like the present but could be if the defections are too great in number.

Of course, any changes on the LSU football staff will impact the 2022 recruiting class and beyond. Signing day will be upon us before you know it.

A new chef, if one is chosen, will want to shop for the groceries since he will be cooking the meal. Giving whoever the coach is the best chance to prepare something to replace the current bitter taste in Tigertown should be the priority of everyone who cares about LSU football. 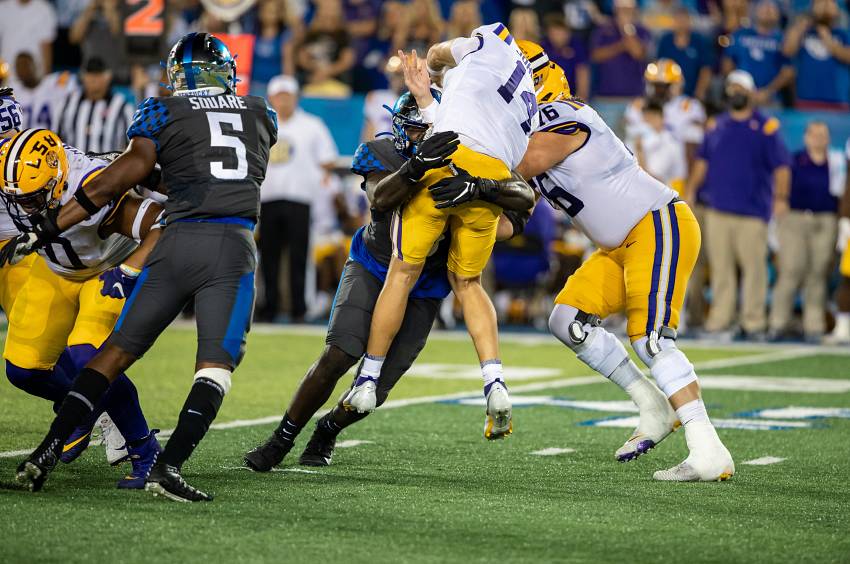 In analyzing the sudden depressing nature of LSU football, let’s start a Sunday morning with a positive.