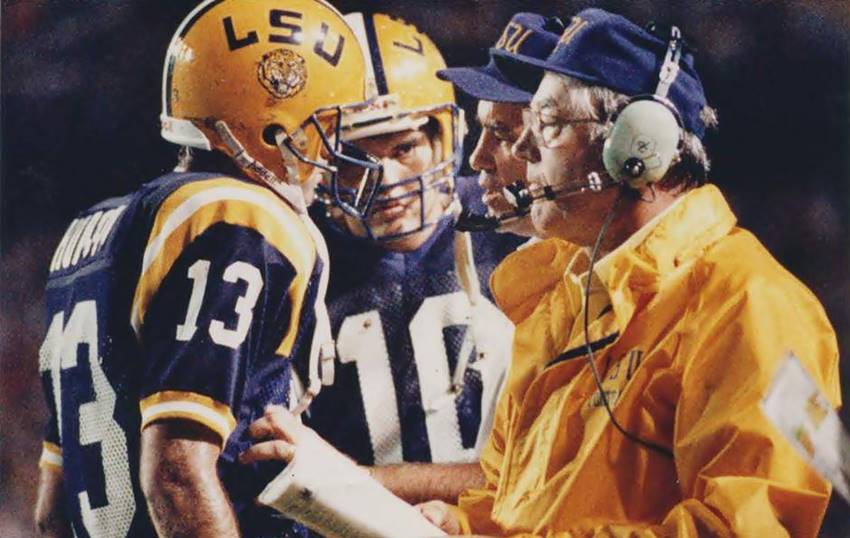 The mid-1980’s for LSU football was an entertaining and exciting time.

The Tigers ended a 16-year SEC title drought in 1986, capping a fine three-year run under head coach Bill Arnsparger. The ’86 LSU defense allowed 14 points per game thanks to the vision of Arnsparger, architect of the great No Name Defense of the Miami Dolphins of the 1970s.

Defensive tackle Tommy Clapp was right smack dab in the middle of this era of Tiger football success. He had prepped at Brother Martin under legendary coach Bobby Conlin on a team filled with talent. Quite a few of Clapp’s fellow Crusaders went on to play college ball. Tookie Spann (Tulane), George Henriquez (LSU), Jay Rink (Tulane). Rod West (Notre Dame), Pat Stant (Tulane) and David Ward (baseball at UNO) were among his teammates.

As for Clapp, the recruiting process present him with a tough decision.

“Alabama, Georgia, UCLA and LSU all came on very hard,” he recalled.

“It was a very difficult year,” Clapp said. “You don’t come across people like Coach Stovall often. He never cursed, but was very tough. He believed in pull pads until Thursday (on game week). Very, very well respected. When he walked into a room everybody sat up straight and stopped talking.”

Arnsparger, at the time a 58-year old with a reputation as a masterful football mind, won two Super Bowls as defensive coordinator under Don Shula with the Dolphins. The culture at LSU took a 180-degree turn.

In the fourth game of the ’84 campaign, LSU traveled to the West Coast to battle USC, a team that would finish the season No. 9 ranked in the country.

“When we landed in L.A., (Arnsparger) said that the hotel bar was for the coaches, that we had to go find our own,” Clapp laughed.

The Tigers dominated the highly regarded Trojans, 23-3, forcing the home team to wave the white flag early in the fourth quarter. Jack Del Rio went on to success as a NFL linebacker and head coach but he was ready to go home.

“Del Rio told our tight end Mitch Andrews while locking up for a play, ‘let’s make it look good,'”

Arnsparger had an opposite approach than Stovall. Practice focus was more about the mental side of the game.

“Fighting at practice was common during the Stovall era, Arnsparger would lose his mind if we had a fight at practice,” Clapp explained. “He was afraid of someone breaking a hand. He also gave us popsicles. He did not have us practice in pads much. He tuned down the physicality at practice. He wanted us to focus on responsibility and knowing where we’re supposed to be. Football IQ was vital. If you were a starter, you wouldn’t hit during spring. You’d run laps.”

Arnsparger trimmed the fat though. Fitness was stressed. “He wanted everybody to lose weight,” Tommy continued. “He wanted guys to be able to run. If you couldn’t learn his defense, he couldn’t count on you and you didn’t play. He needed you in a specific spot at the appropriate time.”

In a nationally telecast game against Alabama in 1985 at Tiger Stadium, LSU appeared the have the 20th ranked Crimson Tide on the ropes. A 49-yard run by Garry James and 67-yard toss from Jeff Wickersham to Wendell Davis had the Tigers tied at 14 late in the game. Unfortunately, a 24-yard chip shot field goal try in the closing seconds by LSU’s Ronnie Lewis sailed wide right, forcing LSU to settle for a painful draw.

Two weeks later, the Tigers traveled north to a frigid South Bend, Indiana to challenge Notre Dame. The thermostat showed showed game time below 20-degrees, a far cry from the sweltering Louisiana heat. The visitors wanted to demonstrate some toughness in the wintery conditions. They miscalculated.

“It was the worse interior locker room I’d ever been in,” Clapp stated. “Snow piled up against the walls outside, bitter cold. We cut our sleeves to show them that we could handle it. Big mistake. Cornerback James Pierson was too close to the space heater on the sideline and his cleats caught fire.”

Another player who caught fire a different way won the game for LSU. Nose tackle Henry Thomas blocked a pair of future NFL kicker John Carney’s field goal efforts of 33 and 32 yards. Thomas added 15 tackles to earn national defensive player of the week honors as the Tigers escaped with a close 10-7 win.

One player who may not have received as much credit as he deserved was Thomas, who played 14 seasons in the NFL and recorded 93.5 sacks while routinely beating double and triple team blocking.

A lightly recruited player out of Houston in 1983, Thomas ended up with an offer from the Tigers by chance…and good fortune.

“Jerry Stovall believed we should always take a player from the Greater Houston area every year,” Jenkins said. “It was late in recruiting that year. (offensive line coach) George Belue was the Houston area recruiter and said that LSU was going to come up empty there.”

“Belue did note that a tight end named Henry Thomas was left,” Jenkins said. “He had Oklahoma State on him, as well.”

LSU did not really have a need for another tight end but it worked out for both the Tigers and Thomas perfectly.

“I raised my hand and asked where Thomas would play. Jerry said, ‘he’s going to play for you.’ The rest is history.”

Jenkins helped mold him into an outstanding player. John Randle and Chris Doleman, Pro Football Hall of Fame defensive elinemanr and former Viking teammates, have often cited how much Thomas had an impact on their careers.

Perhaps the most beloved Tiger of the era, running back Dalton Hilliard set numerous school and SEC records during his time (1982-’85). The soft spoken star out of Patterson was revered by his peers.

“A player was going to be dismissed and (Hilliard) convinced the team to give the player a second chance,” Clapp recalled. “He was the salt of the earth, very humble. Everybody loved him. He did everything just right. When he spoke everyone listened.”

After a 9-2-1 season, LSU had high hopes in 1986. That year brought more memorable games including a gutsy 14-10 win at No. Alabama that helped set up a run to the conference title. Not to be forgotten, a November rematch at home against Notre Dame was highlighted by a defensive series that will live forever among LSU faithful.

In the third quarter, the Fightin’ Irish trailed by just one point with the ball inches from the goal line in front of the rabid south end zone. On four tries from the one yard line, LSU stuffed the run each time.

Notre Dame safety Steve Lawrence had picked off a Hodson offering, returning it almost across the goalline but LSU running back Harvey Williams knocked him out of bounds just short.

“I remember like it was yesterday” recalled Jenkins, who stayed on staff coaching the defensive line under Arnspager. “First of all, if Harvey Williams knocked him out of bounds at the one yard line. If he hadn’t cared enough to do that, the goal line stand wouldn’t have happened.”

A pair of over the top dives by fullback Pernell Taylor proved unsuccessful before Mark Green met the same fate on third down.

“The first play, we wanted (to play) short technique, penetrating, submarining, allowing the linebackers to come over the top,” Jenkins explained. “We wanted the runner to dive from further back.”

“We called for a ‘two knee run’, penetrate (defensive line) and climb (linebackers) on both those downs. It was a team effort,” Jenkins said. “On fourth down, we guessed and got it right. Holtz put Tim Brown in the backfield and (quarterback) Steve Beuerlein ran option left. They were bigger than us. They challenged us. I was thinking that he’s going to the corner. Henry Thomas penetrated causing Beuerlein to try and pitch early.”

LSU managed a gutty 21-19 win but there was no time for rest with rival Tulane headed to Baton Rouge next. It was a testy affair fromt he start. Finally a full blown, bench clearing brawl erupted on the turf of Tiger Stadium. When the fracas began, Jenkins instructed his troops to “stay seated” but when the Tulane players approached the Tigers’ bench, Jenkins screamed, “Buckle ’em up.”

Following the 37-17 LSU win, Arnsparger addressed his squad in the locker room. The clean version of his speech was a proclamation that the Tigers won the game and the fight. “Now let’s go break some furniture,” Arnsparger shouted.

The 1986 LSU defense included 14 players who played in the NFL.

“A lot of credit for that goes to Jerry Stovall,” Jenkins said. “He was a tenacious recruiter. Bill came in and kept it going.”

LSU capped 1986 with their second Sugar Bowl berth in three seasons before Arnsparger left coaching to become the athletic director at the University of Florida.

That level of success did not become commonplace again at LSU until the turn of the century when the true golden age of Tigers football with three national championship seasons followed. But the Arnsparger era holds an important and cherish place in program history.