The contrast was telling. It was stark.

When asked after LSU’s big 37-10 win over Georgia in the SEC championship game if he felt his team deserved the No. 1 seed in the College Football Playoff, Ed Orgeron simply said he would allow the committee to take care of that business, stating that LSU would go anywhere to play anyone.

The Tigers had just put a resounding beating on the Bulldogs, who were playing in Atlanta, about an hour from their home in Athens.

Georgia had the lion’s share of fans in Mercedes-Benz Stadium, and they were roaring like lions. At least they were for a while.

LSU put together a complete game, scoring 37 points on the best defense in the SEC, a defense which had not allowed more than 20 points in a game. LSU shut down the Georgia offense. LSU was superb in the kicking game.

Simply put, LSU was extremely impressive against a team that was at home and badly needed the game. Georgia entered the game seeded fourth in the playoff rankings. The Bulldogs knew they had to win or they would be out.

LSU, on the other hand, was likely in, regardless of the outcome of the game.

The desperation edge was absolutely with Georgia.

The coaching and player edge was with LSU.

Kirby Smart and his defense had a good scheme against LSU. The Bulldog defense simply could not contain LSU when put on the field very often due to the Bulldog offense getting stopped time after time by the Tiger defense.

LSU beat top 10 teams (when they played them) in Texas, Auburn, Florida, Alabama and Georgia.

Then, there was Ohio State.

The Buckeyes are a talented bunch, to be certain. They have wins over Wisconsin (twice), along with Michigan and Penn State. How good, really, is Wisconsin? How goo, really, is Michigan?

I would like Florida, Georgia, Alabama and Georgia’s chances against those teams and they would match up with Penn State as well.

Ohio State went out and played poorly for a half in the Big 10 championship game, falling well behind Wisconsin. The Buckeyes awakened and controlled the second half to win 34-21.

It was a solid win, a good come-from-behind effort. While it is tough to beat a team twice in the same season, the win did not come close to matching how impressive LSU was against a better team.

Clearly, the selection committee saw this and placed the two teams correctly for the playoff. 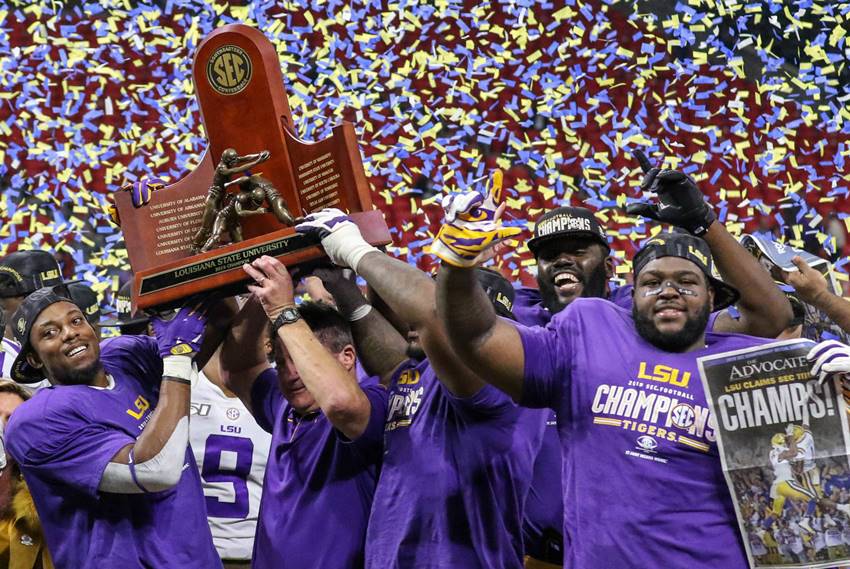 After Ohio State’s win, head coach Ryan Day and his players spent quite some time stating their case as to why they should be the No. 1 seed.

That was a stark contrast to Orgeron and his players, who were comfortable with what they had accomplished and were willing to trust the process.

LSU has the overall resume edge.

While both teams are very talented, do not sleep on Clemson.

Those Tigers are the champions, they play great defense, have a hot quarterback and have a chip on their shoulders, based on a perceived lack of respect. Dabo Swinney is playing this up huge.

LSU will face Oklahoma in Atlanta at 3 p.m. on Dec. 28 in what should be an advantage for the Tigers. Oklahoma is a fourth seed for the third time in four playoff appearances. The Sooners have lost all three previous semifinal games. They are in the playoffs for a third straight year.

First, LSU just played in Mercedes-Benz Stadium, where the Peach Bowl takes place. Second, Atlanta is a good location for LSU fans to reach and fans will feel compelled to do so, particularly when they would not have to fly to a national championship game in New Orleans should LSU make it here.

LSU figures to have an advantage in the stands over Oklahoma.

Let us not forget that LSU beat Oklahoma 21-14 in the national championship game in January of 2004 in the Mercedes-Benz Superdome.

Should LSU win over Oklahoma, the Tigers will return to the Superdome, a huge advantage.

As for Clemson and Ohio State, they are playing a rematch game in the semifinals in the same location that they played in back in 2016.

In that one, the Tigers bounced the Buckeyes 31-0.

Oklahoma had to fight off Baylor in a close game in the Big 12 championship, barely surviving in a rematch game. Swinney went on a long diatribe about his team getting no respect prior to an easy win over Virginia. Clemson is a dynamite team. The Tigers simply played a light schedule, thanks to a bad ACC this year.

Ohio State did a massive amount of talking to campaign for the top spot.

LSU simply went out and earned it.