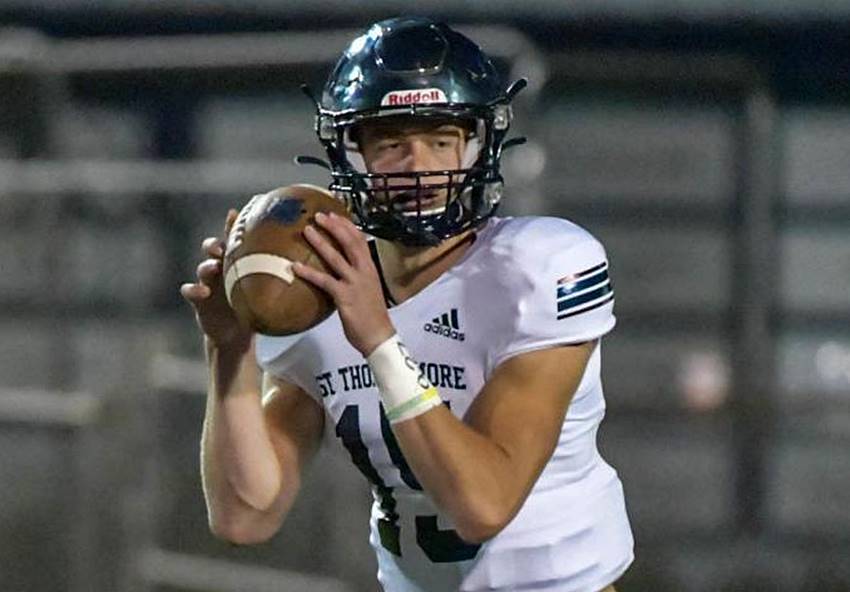 The award, which recognizes not only outstanding athletic excellence, but also high standards of academic achievement and exemplary character demonstrated on and off the field, distinguishes Howard as Louisiana’s best high school football player. Now a finalist for the prestigious Gatorade National Football Player of the Year award to be announced in May, Howard joins an elite group of past state football award-winners, including Emmitt Smith (1986-87, Escambia High School, Fla.), Matthew Stafford (2005-06, Highland Park High School, Texas) and Christian McCaffrey (2012-13 & 2013-14, Valor Christian High School, Colo.).

The 6-foot-1, 185-pound junior quarterback led the Cougars to a 10-0 record and the Division II state championship this past season. Howard threw for 3,430 yards and 39 touchdowns, including 381 yards and four scores in St. Thomas More’s 35-28 win over De La Salle High in the state final. The 2020 MaxPreps State Player of the Year, Howard was selected as the Louisiana Sports Writers Association’s Class 4A Outstanding Offensive Player. He is ranked as the nation’s No. 28 recruit in the Class of 2022 by ESPN.com.

Howard has volunteered locally as a youth football coach. “Walker was special,” said Ryan Antoine, head coach of Westgate High. “He is a true quarterback. He can do it all—run, throw, he’s accurate, he can read a defense and he’s savvy. He had a huge impact on their success.”

Howard has maintained a B average in the classroom. He has made a verbal commitment to play football on scholarship at Louisiana State University beginning in the fall of 2022.

Through Gatorade’s cause marketing platform “Play it Forward,” Howard has the opportunity to award a $1,000 grant to a local or national youth sports organization of their choosing. Howard is also eligible to submit a 30-second video explaining why the organization they chose is deserving of one of twelve $10,000 spotlight grants, which will be announced throughout the year. To date, Gatorade Player of the Year winners’ grants have totaled more than $2.7 million across 1,117 organizations.