BATON ROUGE – The LSU Tigers have found their rhythm and it couldn’t have come at a better time.

Down 4-3 in the bottom of the seventh inning, the 13th-seeded Tigers scored three runs to retake the lead. The bullpen was spectacular, with three pitchers combining to pitch 4.1 scoreless innings of relief.

LSU (40-24) battled back against a resilient Southern Mississippi (40-21) team to win 6-4 and advance to the Super Regionals next weekend. The Tigers will host Florida State, which knocked of Georgia to win the Athens Regional.

Trent Vietmeier (3-1) pitched two innings of scoreless relief for the win. Devin Fontenot earned his seventh save of the season, blanking the Golden Eagles in the eighth and ninth. Starter Eric Walker went 4.2 innings, giving up four runs on three hits, with two walks and two strikeouts.

Josh Smith went 2-for-4, with three RBI to pace the LSU offense. Zach Watson drove in two runs, and Saul Garza was 2-for-4 with an RBI.

With the first of his pair of singles on the night, Antoine Duplantis passed Eddy Furniss as LSU’s career leader in hits. He also set a new LSU record for career games played.

One of the best to ever wear the Purple and Gold with not one but two records tonight! #GeauxTigers🐯 pic.twitter.com/CNbWOuT36j

Greg Montenegro, who went 7-for-9 in two games on Sunday, and Danny Lynch combined for three of Southern Miss.’s six hits and drove in three of the four runs scored by the Golden Eagles.

The Tigers took an early lead in the bottom of the first inning when Smith blasted the first pitch he saw into the Diamond Deck at Alex Box Stadium.

LSU kept things going in the second inning. With two men aboard, Smith came through again. This time he sent a liner into left center for a triple that drove in both Chris Reid and Hal Hughes, giving the home team a 3-0 lead.

Walker kept the Golden Eagles at bay for the first three innings, not allowing a single batter to reach base.

Montenegro got the first hit and scored Southern Miss.’s first run after sending a solo shot of his own over the right field fence to lead off the fourth. Walker settled down to get the next three batters in order, but the energy in the third base dugout began to pick up.

After holding LSU scoreless in the bottom of the inning, the Golden Eagles picked up their offense in the top of the fifth.Third baseman Danny Lynch’s single drove in Cole Donaldson and Hunter LeBlanc to tie the game at three. Three batters later, Matt Guidry slapped a single to center field that scored Lynch to put Southern Miss. in front, 4-3.

That chased Walker from the game, and Paul Mainieri turn to Matthew Beck to get his team out of the jam. But first, Beck walked the bases loaded. He was down 3-2 to Matt Wallner before getting him to strike out swinging, ending the inning with the Tigers trailing 4-3.

The score was the same in the bottom of the seventh, when Duplantis started the inning with a single to left. Daniel Cabrera followed with a single of his own, advancing to second on the throw and putting two runners in scoring position.

He was followed by Zach Watson, who singled to center, driving in both runners, putting LSU back in front 5-4. That ended the night for Josh Lewis, who was making just his second start of the season for the Golden Eagles.

Jerod Wright threw the wrong pitch to Garza, who sent a screamer to the warning track that bounced off the base of the wall in right center. His double scored Watson and extended the lead to 6-4.

Fontenot came on to get the final six outs to seal the victory and bring LSU two victories from another trip to Omaha and a 19th appearance at the College World Series.

The Road to Omaha continues though Baton Rouge!

We will see you next week at The Box as LSU will play in its 14th Super Regional! #GeauxTigers🐯 pic.twitter.com/s6XMizQjWr

The Tigers improved to 29-7 in regional play under Paul Manieri and captured its eighth NCAA Regional title in 13 seasons. LSU is 8-1 when hosting a regional during that time.

LSU will host a Super Regional for the 24th time in school history. The Tigers are 17-6 as the home team.

Start dates and times for Super Regional play will be announced on Monday. 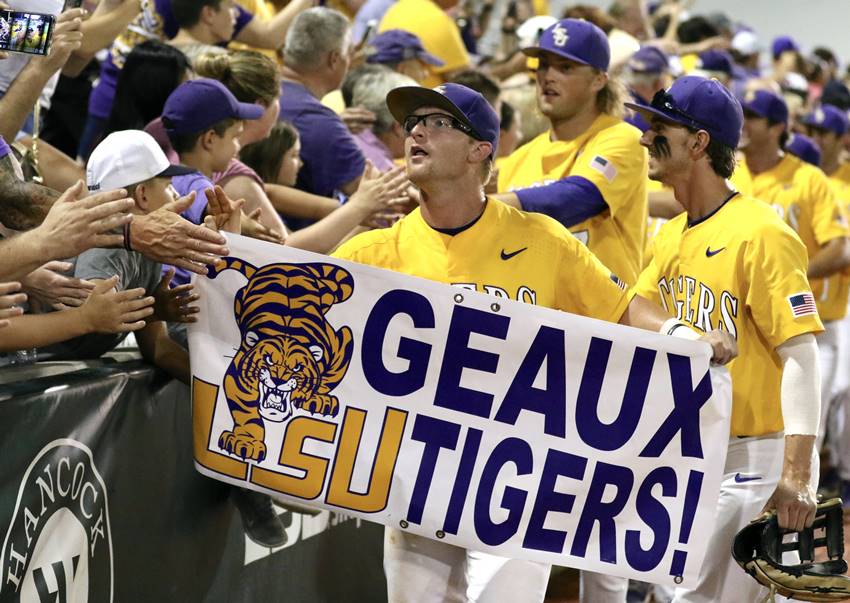 It was quite a scenario Sunday night at the NCAA Baton Rouge Regional.