It was a smart game plan that yielded a road SEC win. Mission accomplished.

This game will be different.

This week’s opponent, Auburn, is a more of a ground n’ pound bunch, focused more on running the ball and controlling the clock.

Auburn boasts the third and fourth best foot soldiers in the SEC, Tank Bigsby with 403 yards and four scores and Jarquez Hunter with 382 yards and two touchdowns. Combined the pair have 785 yards and six touchdowns on the season. Toss in junior Shaun Shivers who returns this weekend. Auburn owns the No. 3 running attack.

Auburn features a very balanced offense, with 484.25 total yards per game (227 yards through the air and 257 on the ground). The visiting Tigers need the running game the succeed for the passing attack to thrive.

We won’t ignore the big storyline though. Even if former LSU quarterback T.J. Finley doesn’t start for the opposing Tigers, you can expect him to play. He will have something to prove to the hometown fans. I am expecting Bo Nix to handle the first snap though.

No Auburn receiver jumps out, but three of them – Kobe Hudson, Shedrick Jackson and versatile tight end John Samuel – have 13 catches.

Manning and Hamm share a close bond. Both arrived on the plains in the 2016 signing class. Both were diagnosed with cancer prior to their freshman season, Manning with acute promyelocytic leukemia and Hamm Hodgkins with Leukemia.

Auburn honored both scholarships as they recovered. After they were declared cancer free, Manning and Hamm became instrumental in the success of Auburn’s running attack and NFL prospects.

Brahms, who has 25 career starts and is a Remington Trophy candidate, is considered the best center in the SEC and among the top five at his position in the country.

LSU’s B.J. Ojulari is a terror off the edge now with 4.5 sacks. Speed versus power may lead to plays behind the line of scrimmage against the Auburn offense at times. LSU paces the SEC with 18 sacks while Auburn has 12 so far.

In perhaps the marquee matchup of the night, junior cornerback Roger McCreary with a pair interceptions this season already will draw the assignment to shutdown Kayshon Boutte.

The mismatch between the two running games is stark but all is not doom and gloom for the Bengal Tigers. Saturday’s encounter is a winnable one for LSU (a 3.5-point favorite), but things will have to fall in place. LSU has prevailed in the past 10 matchups played at Tiger Stadium between these two combatants so the belief will certainly be there for the Purple and Gold.

The passing game must click again. Max Johnson was 17-of-27 last week for 280 yards, four touchdowns and an interception against Mississippi State. Thus far, the second-year left-hander has tossed for 1,144 yards, 15 scores and three picks. He is extremely efficient.

I think that you’ll see Johnson press the edge of the Auburn defense with roll outs and bootlegs. Moving the pocket around and taking advantage of his mobility will help his blockers.

Boutte has snared 24 passes for 309 yards and eight touchdowns, twice as many as anyone else on the team. He will draw extra attentions, meaning Jack Bech, Deion Smith, Trey Palmer and Brain Thomas will see the ball more this week. They must produce results.

Auburn will challenge the Tigers’ passing attack with blitzes and flooding the zones, inviting LSU to run the ball. Or at least trying to make them prove they can run.

LSU averages a meager 2.9 yards per carry average, dead last in the conference. It will be imperative that more of a running game than we’ve seen this year shows up Saturday. That will be a major hill to climb though with an offensive line still in flux. Left tackle Cam Wire’s expected return will be a boost.

Freshman running back Corey Kiner leads LSU with 144 yards and a 5.3 yard average. Perhaps this game will be his official coming out party.

Nickel back Cordale Flott forced a fumble and had an interception last week. He is assuming a larger role in the secondary, particularly with the absence of top corner Derek Stingley, Jr., who may or may not face Auburn.

Speaking of the Auburn rushing attack, middle linebacker Bug Strong will need to step up and have a big game. He will have many opportunities in the type of game that should suit him well.

If LSU wins a close one, the kicking game could be the deciding factor. Cade York has two field goals over 50 yards among his four conversions without a miss. That’s not to say Auburn is lacking in that department. They have five successful kicks between 40-49 yards, making 9-of-10 field tries.

I believe the outcome will be determined by a late field goal and/or by a key turnover. Flip a coin.

RECRUITING: Two visitors to Tiger Stadium this weekend will bear watching. Class of 2022 defensive back Earl Little (6-0, 175), a four-star from Fort Lauderdale, Fla., brings quite the pedigree. His dad Earl played in the NFL for eight seasons with his first two in New Orleans. The younger Little has paired his list down to LSU, Alabama, Florida and Florida State.

Also, a coveted five-star prospect for 2023 will be taking in the sights and sounds Saturday night. Jayden Wayne (6-5, 245), the seventh rated defensive end in the class from Tacoma, Washington, has finalized his official visit list to LSU, Alabama, Notre Dame, Georgia, Oklahoma and Florida. 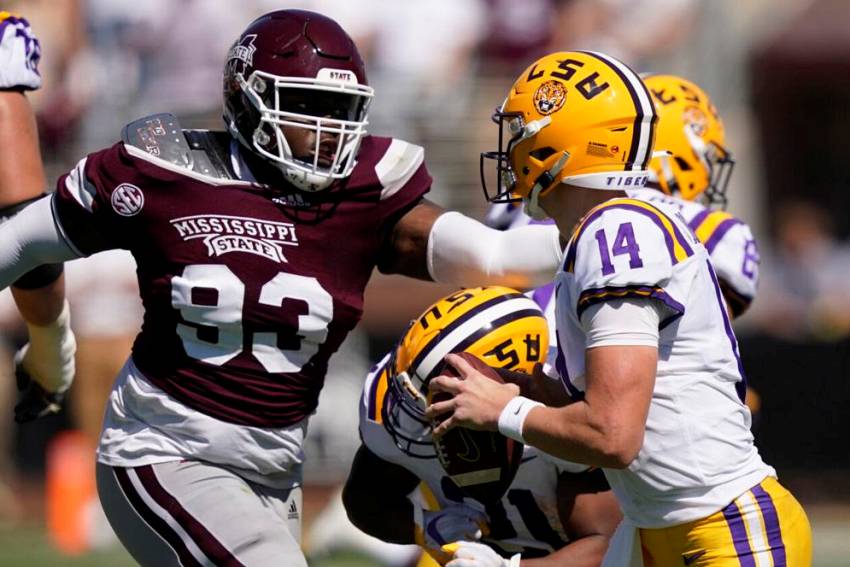 Time's running out for LSU to fix blocking, running game with Auburn on deck

What should have been a comfortable SEC win at Mississippi State turned into a nailbiter. The reasons why it was so close are familiar.