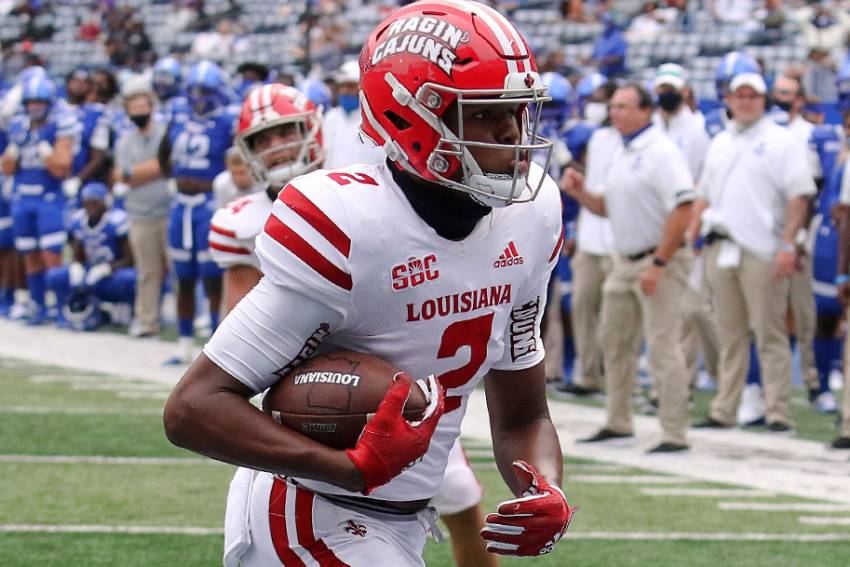 The eight transfers include four on the defensive side of the ball, two offensive players and a pair of specialists.

LSU added two starters from Arkansas in defensive backs Greg Brooks Jr. and Joe Foucha. Both Louisiana natives, Brooks and Foucha helped the Razorbacks to a 9-4 mark in 2021 and a win over Penn State in the Outback Bowl. Foucha joins the Tigers after recording 231 tackles and 11.5 tackles for loss during his career at Arkansas, while Brooks had 112 tackles and four interceptions for the Razorbacks.

The Tigers also picked up a pair of starters from Louisiana-Lafayette in cornerback Mekhi Garner and wide receiver Kyren Lacy. Garner, a third-team All-Sun Belt selection in 2021, joins the Tigers after starting 19 times for the Cajuns. Lacy led ULL in TD receptions in both 2020 and 2021 and comes to LSU with 50 career receptions for 668 yards and 10 touchdowns.

The Tigers also added a standout offensive lineman in FCS All-American Tre’mond Shorts. Shorts started four years at East Tennessee State leading the Bucs to the Southern Conference title and the quarterfinals of the FCS Playoffs in 2021.

West Weeks will add immediate help to the linebacker position after transferring from Virginia. Weeks played in 11 games with one start as a true freshman in 2021. He recorded 31 tackles, five pass breakups and a sack last year.

The list of transfers is rounded out by a pair of specialists in Notre Dame punter Jay Bramblett and East Carolina long snapper Slade Roy. Bramblett started three-straight years for the Irish, averaging 41.6 yards. His best year came in 2021 when he averaged 43.1 yards on 58 punts for the 11-2 Irish.

Roy served as East Carolina’s starting long snapper as a true freshman in 2021 as he helped the Pirates to a 7-5 mark and a berth in the Military Bowl.

Defensive back transfer from Arkansas where he started 31 games in three years with the Razorbacks … 112 career tackles to go along with 5.5 tackles for loss and four interceptions … Had interception in Outback Bowl win over Penn State … Career-best seven tackles against Ole Miss and Georgia in 2021 … Dad was selected in the 2004 NFL Draft by the Bengals … Native of Harvey, Louisiana.

Three-year starter in the secondary at Arkansas … Appeared in 44 games for the Razorbacks, starting 33 times … 231 tackles, 11.5 tackles for loss and 2.5 sacks … Recorded five interceptions, including one in Arkansas’ win over Penn State in the 2022 Outback Bowl … Fourth on team in tackles in 2021 with 75 …SEC Co-Defensive Player of the Week for his performance in win over Mississippi State in 2020 … Native of New Orleans.

Transfer defensive back from Louisiana-Lafayette where he played in 26 games, starting 19 times … Helped the Cajuns to a 13-1 mark in 2021 and the Sun Belt Conference title … 63 career tackles with 3.5 tackles for loss and 1.5 sacks … Intercepted three passes, all coming in 2020 … Named third team All-Sun Belt in 2021 … From Mesquite, Texas.

Standout wide receiver transfer from Louisiana-Lafayette … Led the Cajuns in TD receptions in 2020 and 2021 … Capped career with the Cajuns with 50 receptions for 668 yards and 10 touchdowns … Appeared in 25 games, starting seven times … Helped the Cajuns to a 13-1 mark and the Sun Belt title in 2021 … From Thibodaux, Louisiana.

Served as long snapper in all 12 games for East Carolina as a true freshman in 2021 … Helped East Carolina to a 7-5 mark and a berth in the Military Bowl … Native of Charlotte, North Carolina.

Four-year starter on the offensive line for East Tennessee … Second Team FCS All-America in 2021 and first team All-Southern Conference … Appeared in 43 games at East Tennessee, starting 41 times … Started 40 straight games to finish his career with the Bucs … Helped team to an 11-2 mark, the SoCon Championship and a quarterfinals appearance in the FCS Playoffs in 2021 … From Hampton, Georgia.

Transfer from Virginia where he appeared in 11 games with one start as a true freshman in 2021 … Finished rookie season with 31 tackles, five pass breakups, a sack and a fumble recovery … Started season-finale against Virginia Tech and responded with five tackles and a sack for a 14-yard loss … Dad was starting offensive lineman at Georgia from 1991-95 … From Watkinsville, Georgia.