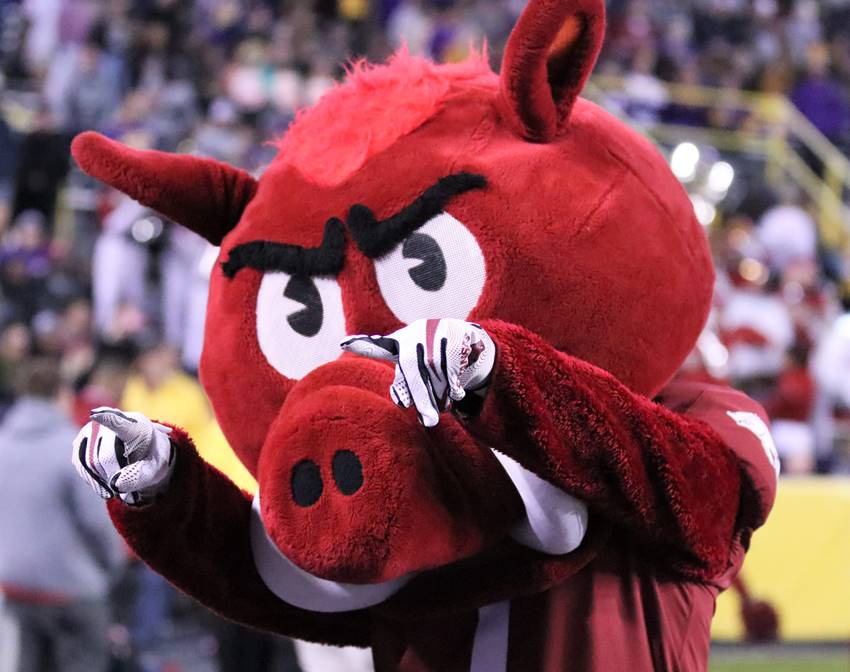 • After a two-week layoff, LSU (2-3) plays its first game since Oct. 31 when the Tigers travel to Fayetteville to face Arkansas (3-4) on Saturday.
• Kickoff is scheduled for 11 a.m. on the SEC Network.
• The game is the annual battle for the Golden Boot, a trophy game established prior to the 1996 contest. The trophy is 24-karat gold and is molded in the shape of the states of Louisiana and Arkansas. It will reside on the LSU sideline during the game. The Tigers have won the last four meetings with the Razorbacks.
• Last year, LSU posted a 56-20 win over the Razorbacks in Baton Rouge to clinch a spot in the SEC Championship Game.
• LSU is 41-22-2 all-time against Arkansas, which includes an 18-10 mark in games played since the Razorbacks joined the SEC in 1992.
• The Tigers are 12-0 under Ed Orgeron in games following a loss. That mark includes a 2-0 record in 2020. LSU hasn’t dropped back-to-back games since 2015 when the Tigers lost three straight games during the month of November (Alabama, Arkansas, and Ole Miss).
• Orgeron is 42-12 as head coach of the Tigers. His 40 wins through the first 50 games were the second-most among any coach in school history.
• Of his 42 wins with the Tigers, 33 have come by double-figures, 18 have come against teams ranked in the Top 25 with 12 of those coming against Top 10 opponents. Orgeron is 12-3 against Top 10 teams at LSU.
• LSU is 25-1 overall under Orgeron and 2-0 in 2020 when having a 100-yard rusher.
• In 5 games, LSU has used 18 first-time starters (10 vs. Mississippi State, 3 vs. Vanderbilt, 1 vs. Missouri, 3 vs. South Carolina, 1 vs. Auburn).
• Offensively, LSU ranks No. 4 in the SEC in passing offense (338.4), total offense (458.0), and scoring (35.8).
• QB Myles Brennan, who has missed the past two games with an injury and is unlikely to play this week, leads the SEC in passing yards per game (370.7) and ranks No. 4 in total offense (358.7). In three games, Brennan has connected on 79-of-131 passes for 1,112 yards and 11 TDs. It’s the most passing yards and TDs for a LSU quarterback in the first three starts of a career.
• Brennan’s true freshmen backups TJ Finley and Max Johnson have combined to complete 45-of-69 passes for 580 yards and 3 TDs. Finley started against both South Carolina and Auburn.
• WR Terrace Marshall Jr. had his school-record tying streak of consecutive games with a receiving TD snapped at 7 against Auburn. Marshall still leads the SEC in receiving TDs with 9.
• In five games, Marshall has caught 31 passes for 540 yards and 9 touchdowns and dating back to last year, he’s caught 14 TD passes in his last 8 games. He’s also caught at least 1 TD pass in 12 of his 18 career starts.
• RBs John Emery (246 yards, 2 TDs) and Ty Davis-Price (245 yards, 2 TDs) lead the LSU rushing attack. Both players have a 100-yard rushing game to their credit this year – both LSU wins (Emery 103 vs. Vanderbilt; Davis-Price 135 vs. South Carolina).
• 13 different players have caught passes for LSU this year. True freshman TE Arik Gilbert is second on team with 22 receptions for 259 yards and 2 TDs.
* True freshman DE BJ Ojulari ranks No. 3 in the SEC in sacks with 4.0. LSU’s Ojulari had three sacks in LSU’s win over South Carolina and then got the first start of his career the following week against Auburn.
* True freshman CB Eli Ricks – who returned an interception for a TD against South Carolina – leads the SEC in interceptions with 3.
* S JaCoby Stevens (36) and LB Damone Clark (34) lead the Tigers in tackles, while DE Ali Gaye leads the team in tackles for loss (6.5).
* PK Cade York is 8-of-10 on field goals and with five of his eight field goals coming from 40-yards or longer.
* P Zach Von Rosenberg ranks No. 2 in the SEC in both punting average (47.0) and punts downed inside the 20 (13).

17 – Number of true freshmen that have seen action for LSU through the first 5 games of the season.

18 – Number of first-time starters for LSU in 2020, which ties with Arkansas for the second-highest total in the SEC.
24 – Straight games LSU has had at least one passing touchdown.

LSU Under Louisiana’s Own Ed Orgeron
*In his fourth full season as head coach of the Tigers, Orgeron continues to gain momentum on the field and on the recruiting trail.
*Orgeron has guided the Tigers to a 42-12 overall mark.
*He has led the Tigers to five postseason victories – one in the SEC Championship Game, two bowl games and two in the College Football Playoffs.
*Of LSU’s 42 wins under Orgeron, 33 have come by double-figures and 12 have been over Top 10 teams. The 12 Top 10 wins rank as the second-most for a coach in LSU history, trailing only Les Miles who won 16 games over Top 10 opponents in 12 years.
*Under Orgeron, the Tigers have played 46-of-54 games ranked in the Top 25, including every game in 2018 and 2019.

Consecutive Starts
*S JaCoby Stevens leads the way in consecutive starts with 24 after the loss at Auburn.
*There are only two other players for the Tigers that have made 8 or more consecutive starts in WR Terrace Marshall Jr. (13) and OL Austin Deculus (9).

Marshall Jr. Consistent on Offense
*In his 12th consecutive start, Marshall Jr. continued to be consistent for the Tigers, recording two more touchdowns and finished with 88 yards against South Carolina.
*His two touchdowns was the eighth game in his career with multiple touchdowns.
*He has caught at least one TD pass in 12 of 17 games that he’s started during his career and had seven straight games with a TD pass, dating back to lthe final three games of last season and the first four games of 2020.
*He has two reception TDs in four straight games (Mississippi State, Vanderbilt, Missouri, South Carolina) which is the longest streak by an SEC player since Keenan Burton in 2006 for Kentucky. Marshall and Burton are the only two SEC players with two reception TDs in four straight games over the last 25 seasons.
*He tied the LSU record for touchdown receptions in consecutive games (7). Marshall’s record spanned two seasons; the final three games of 2019 and the first four games of 2020.
*His 235 yards at Missouri was the first 200+ yard receiving game for an LSU receiver since Ja’Marr Chase against Clemson in the Nation Championship last year and the fourth most a Tiger receiver has ever had in a game.
*He picked up a longest touchdown reception in his career at Missouri – a 75 yard pass from Brennan that gave the Tigers a 37-31 lead. That was the longest passing TD since Burrow-to-Chase vs. TAMU in 2019.
*He has 22 career touchdowns, nine on the season which is second in the nation and first among power five teams. He is four touchdowns away from tying the career touchdown catch record – Dwayne Bowe (26, 2003-06). He currently sits behind Ja’Marr Chase (23) in fifth.
*He is fourth in the league in receiving yards with 108.0 per game and second in scoring with 10.8 points per game.

LSU is 12-0 Following A Loss Under Orgeron
*LSU goes into the Alabama game with a 12-0 mark under Ed Orgeron in games following a loss.
*The Tigers have never lost back-to-back games under Orgeron.
*LSU last lost consecutive games in November of 2015, dropping three straight contests to Alabama, Arkansas, and Ole Miss.
*The Tigers are 2-0 in 2020 in games following a loss, beating Vanderbilt and South Carolina the week after defeats.

Making Most of His Punts
*LSU punter Zach Von Rosenberg is making the most of his opportunities. He had seven punts at Auburn for a total of 342 yards, average 48.9 yards per punt. He had a long of 55 and two inside the 20 yard-line.
*On 22 punts, Von Rosenberg is averaging 47.0 yards a punt.
*Of his 22 punts, 13 have been downed inside the 20-yard line and nine 50+ yarders. He has had seven fair catches and two for touchbacks.
*He has a long of 60 this season, coming at Missouri.
*In the SEC, he currently ranks second in average yards per punt (47.0)
*Zach Von Rosenberg, the second oldest college football player in the country at the age of 30.
*Von Rosenberg ranks second in program history in career average (44.4 yards per punt), fifth in total career yards (6,926) and eighth in total career punts (156).
*After Mississippi State, he earned the Ray Guy Punter of the Week on Tuesday after averaging 49.4 yards per punt with a long of 58 yards. He had five punch down inside the 20-yard line and three punts over 50 yards against the Bulldogs.

Boutte Picks Up First Touchdown as a Tiger
*At Auburn, true freshman Kayshon Boutte picked up the only touchdown for LSU, his first in his career.
*The touchdown came in the fourth quarter – a 43-yard pass from Max Johnson.
*In five games, Boutte has a total of 12 receptions for 168 yards and one touchdown with a long of 43 yards coming at Auburn.
*He is averaging 14.0 yards per catch and 33.6 yards per game.

Max Johnson Makes First Touchdown Pass in Second Appearance
*True freshman Max Johnson made his first touchdown pass in a Tiger uniform at Auburn – a 43 yard pass to true freshman Kayshon Boutte in the fourth quarter.
*Johnson finished the game completing 15 of 24 passes for a total of 172 yards with one touchdown.
*True freshman TJ Finley started his second straight game and went 13-for-24 in the air for 143 yards.

York on Field Goals and PATs
*Cade York added another field goal to his list at Auburn – a 50-yard field goal at the end of the first half.
*He is now 8-of-10 on field goals for the year, which is fifth in the league, and is 21-of-21 on PATs which ranks first in the SEC.
*With 197 career points, York moves in to the Top 10 in LSU ranks in total points by a kicker at No. 8.
*He has made 64 consecutive PATs which ranks him sixth in LSU history in consecutive PAT kicks made. Last PAT missed was at Alabama in 2019.
*York is 7-of-8 in 50+ yard field goal in his career, including a school-record six-straight.
*He is the only player in school history to make multiple 50+ yard field goals in the same game (11/30/19 vs. TAMU, 51 and 50.)
*His only two misses in 2020 was the blocked FG at Missouri and a 54-yard miss at Auburn.