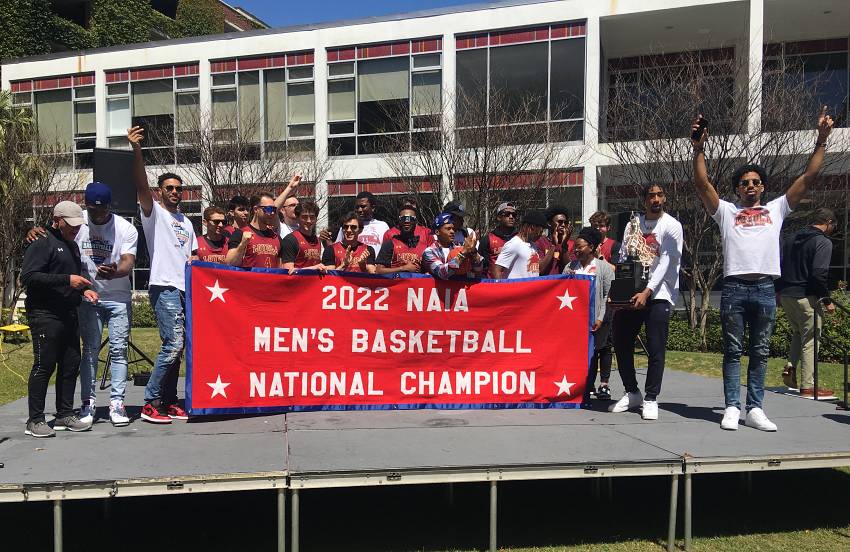 The 21-22 NAIA Men’s Basketball National Championship banner and rings ceremony will begin at 5:30 p.m. prior to Loyola’s game against SUNO at 6 p.m.

The special event takes place as Loyola men’s basketball hosts “Alumni Weekend.” Former Wolf Pack coaches and players will be in attendance to celebrate with the program.

The Wolf Pack turned in a dominant season with a 37-1 overall record and a 17-1 mark in Southern States Athletic Conference play last year, winning both the SSAC Regular Season and Tournament titles. After running through the SSAC Championship tournament, Loyola won six games in the NAIA National Championship tournament by an average of 20 points, capping it off with a 71-56 win in the national title game against Talladega.

What made Loyola’s run more unique was that the team played the entire season without a true home game after The Den suffered damage during Hurricane Ida in August 2021. The gym experienced flooding, causing the team to travel to Dallas for preseason practices, and upon returning to New Orleans, the Wolf Pack had to hold early-morning practices at various locations around the city. Loyola played some of its home games at Tulane’s Devlin Fieldhouse before returning to The Den on a temporary floor provided by the Pontchartrain Center in Kenner. On top of that, the program dealt with COVID-19 postponements, a tornado scare while on the road at Stillman College, and food poisoning-like symptoms while in Kansas City at the national tournament.

The Wolf Pack Network will broadcast the entire ceremony at https://team1sports.com/loyolanoathletics/, including special interviews with current and former players and coaches leading up to the event.