Loyola advances to championship of NAIA Opening Round 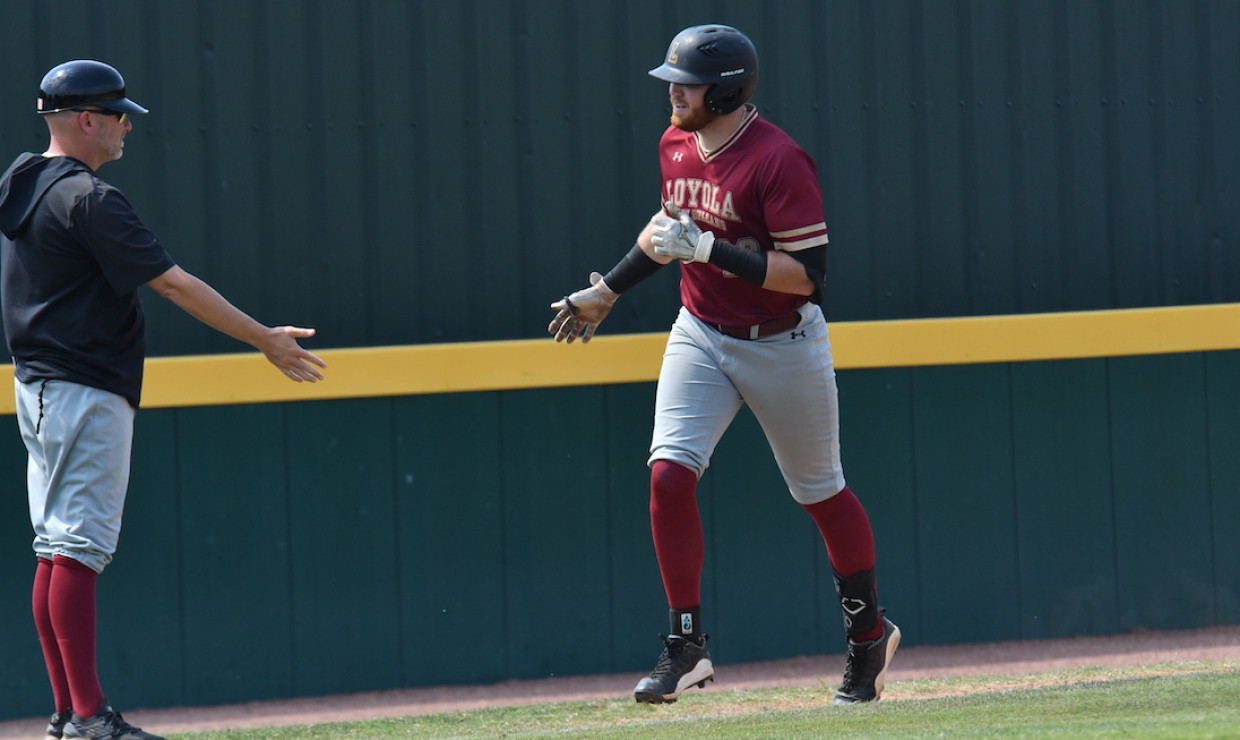 SHREVEPORT, La. – A day after winning their first-ever NAIA national tournament game, the Loyola Wolf Pack is now one win away from advancing to the NAIA World Series after Tuesday’s 9-5 win over Lyon College.

Loyola (3-0) advances to the Opening Round Championship pic.twitter.com/g3oiuaITAE

The Wolf Pack (36-22) is now set to play at 2:30 p.m. on Wednesday in the championship round, but they won’t know their opponent until after the early game prior to the championship. Lyon College will play the winner of Tuesday night’s contest between Science and Arts (Okla.) and LSU Shreveport to determine who will play the Wolf Pack. Loyola needs just one win to lock up the tournament, and it’ll have to be beaten twice for any other team to advance.

The Wolf Pack struck first, taking advantage of some mistakes from Lyon in the game’s opening frame. Luke Clement reached on a walk, moved to second on a wild pitch, and then came all the way home after Payton Alexander hit a ball through the third baseman’s legs and into the outfield.

Lyon tied things up in the second, but Clement again put the Wolf Pack ahead, 2-1, with a home run in the top of the third, and that would begin a stretch of four-straight innings where the Pack would plate a run.

Jake Mills was next to score, reaching on a hit to center in the fourth inning before being driven in by an Aaron Davis right-field single. Then in the fifth inning, leadoff hitter Allen Dennis got a ball to drop in center field, and he later scored on a bases-loaded walk. Loyola got one more in the sixth in another bases-loaded scenario, as Alexander grounded one to short to bring Kason Cullins home on a fielder’s choice.

Though the Scots kept things close through the majority of the game, the Wolf Pack held a multiple-run advantage from the fourth inning onward, and the Pack got some important insurance runs in the ninth, starting with Christopher Bohrer touching home plate on a bases-loaded walk. With a 6-3 Wolf Pack lead, Tucker Ganley smacked a bases-clearing double into right-centerfield to put Loyola ahead 9-3, the largest lead of the game.

In a solid start for Brenden Taravella, Lyon College was limited to just two runs through the first five innings. In 5.2 innings of work, Taravella earned the win while throwing seven strikeouts, tying a season-high. The senior started the day with a 1-2-3 first inning with a pair of strikeouts before allowing the first run in the second. He added back-to-back clean innings in the third and fourth frames to keep the Scots off the board, too. John Blanchard III entered in relief with two outs left in the sixth, and he pitched the remainder of the game to earn the save. Blanchard struck out four during his outing as well.

• Tuesday’s win brings Loyola’s season wins total to 36, which ties last year’s Wolf Pack squad for the most single-season team wins in program history.
• Brenden Taravella continues to climb the all-time pitching wins list. He’s now at 15 career victories, which ties him with his former teammate, Joseph Kuchler, for the seventh-most wins in Loyola history.
• Luke Clement’s on-base streak continues! With his third-inning home run, Clement has recorded a hit in his last 22 games and reached base in 36 straight.
• The homer was the 11th of the season for Clement, who moved into a four-way tie for third place in program history for most home runs in a season.
• Every Wolf Pack batter was able to safely reach first at least once during the game, including pinch hitters. That’s the 10th time that’s happened this season.
• The fifth-inning hit from Allen Dennis was his team-leading 71st hit of the season. That’s tied for the ninth-most in a season in program history.
• Dennis also scored a run, and he needs just one more to tie Loyola’s single-season runs record.