The days of regionals featuring a host of in-state teams is not over but it is no longer a given.

While Stanford will host an all-California regional, no other regional among the 16 NCAA Baseball regional sites announced Monday will include no more than two teams from any particular state.

Louisiana has three teams in the 64-team field with LSU as a host. While it would have been nice (and convenient) to see Southern remain home in Baton Rouge and to see McNeese at Alex Box Stadium this weekend, that will not happen.

LSU earned the 13th seed overall in the tournament, and the reward was an interesting, tough regional in Baton Rouge.

It seems like just yesterday when the Seawolves emerged from nowhere to shock LSU in the 2012 Super Regional round in Baton Rouge.

LSU won the opening game of the Super Regional 5-4 but it took 12 innings on a walk-off RBI single by Mason Katz and it was an indicator of how difficult the SeaWolves would be.

Stony Brook rebounded to win 3-1 on Saturday and 7-2 on Sunday to advance to the College World Series.

It was a stunning development. No one expected it. At the conclusion of the regional, which I covered, there was no doubt that the better team won.

While the players are different, Paul Mainieri will no doubt answer many questions about that regional this week. There is also no doubt that he will remind his players about what happened seven years ago.

Stony Brook won the America East tournament, beating Binghamton 7-5 in the title game. The Seawolves bat .278 as a team with 36 home runs and 61 stolen bases. Pitching is not a strength as Stony Brook has a 5.33 team ERA.

The other matchup in Baton Rouge has Conference USA tournament champion Southern Miss (38-19) vs. Arizona State (37-17) out of the Pac 12 conference.

The Golden Eagles lost their final three regular season series’ in conference play but rebounded in a big way in Biloxi this past weekend.

USM no-hit Rice in the semifinal and shutout favored Florida Atlantic in the title game, ending the regional with 19 straight scoreless innings by its pitchers.

Junior outfielder Matt Walner is the all-time leader in home runs in USM history with 54. He was 7-of-16 with two homers and four RBI to earn Most Valuable Player honors in the tournament.

Southern (32-22) is in the NCAA tournament for the first time in a decade and the Jaguars, who won the SWAC Tournament in New Orleans, face a tough task against No. 6 national seed Mississippi State (46-13) at Starkville.

Tyler LaPorte, the Co-SWAC Player of the Year, leads the way for Southern. Eli Finney made two fine starts in the tournament win while SWAC Relief Pitcher of the Year Connor Whalen is an excellent option out of the bullpen. Javeyan Williams, Johnny Johnson and Bobby Johnson are good players as well, along with former Rummel outfielder Ashanti Wheatley another solid, veteran player. Southern had a good home win over LSU this season.

Mississippi State (46-13) has no apparent weakness.

Ethan Small leads the pitching staff at 8-2 with a 1.80 ERA. Small has been dominant, allowing just 48 hits in 90 innings with 150 strikeouts. JT Ginn is 8-4 with a 3.49 ERA. Small has allowed just 66 hits in 77 and a third innings with 100 strikeouts. Cole Gordon is 4-0 with nine saves while Jared Liebelt has five saves. The Bulldogs have an impressive 3.57 team ERA.

The Chippewas are batting .302 as a team with just 29 home runs but with 88 stolen bases.

Central Michigan has a pair of aces in Cameron Brown and Pat Leatherman. Brown is 10-0 with a 2.72 ERA. In 96 innings, Brown has allowed just 76 hits and has 78 strikeouts. Leatherman is 10-1 with a 2.56 ERA. Leatherman has 83 strikeouts in 84 and a third innings while allowing just 65 hits. Cameron Miller has five saves.

McNeese (35-24) earned its bid by winning the Southland Conference tournament. The Cowboys were placed into a tough regional in Nashville hosted by Vanderbilt, but the SLC auto bid winners will open with Indiana State (41-16). 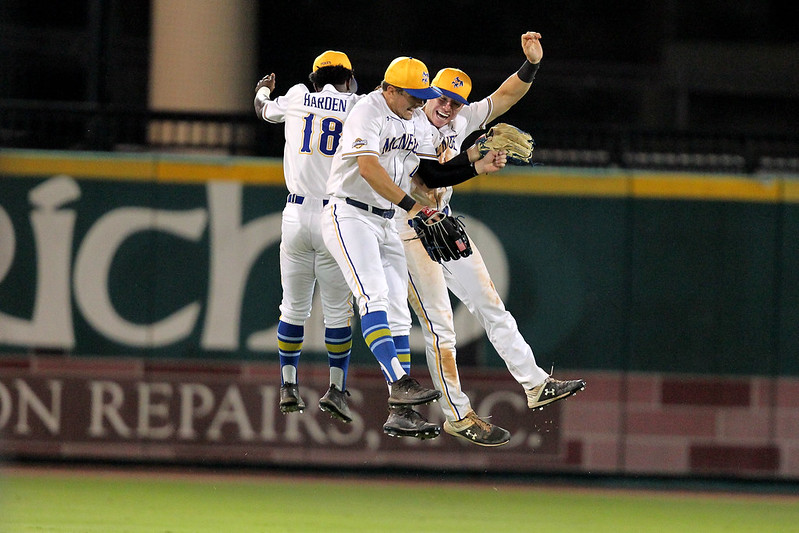 McNeese has a 4.16 team ERA. Rhett Deaton is 8-4 with a 3.83 ERA. Deaton has allowed just 77 hits in 91 and a third innings. Aidan Anderson has seven wins and seven saves while Will Dion has six saves.

Indiana State has good pitching, with a team ERA of 3.60. Collin Liberatore is 10-1 with a 2.78 ERA. Liberatore has allowed just 70 hits in 97 innings with 72 strikeouts. Triston Polley is 7-1 with a 2.53 ERA and three complete games. In 99 and two-third innings, Polley has allowed just 76 hits and has 84 strikeouts. Tyler Grauer has eight saves while Tyler Ward has five saves.

The Commodores may very well be the nation’s top team. Of course, they won a national title in 2014.

Ohio State won the Big 10 conference tournament. The Buckeyes bat .268 as a team with 64 home runs but only 37 stolen bases.