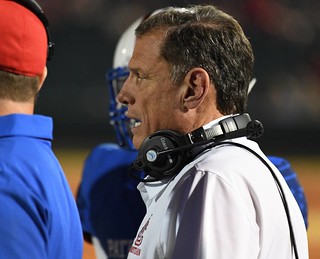 With the prep football season upon us, four legendary coaches will look to add to their Top 10 win totals in the history of Louisiana prep football history.

J.T. Curtis of John Curtis Christian is far and away the all-time leader in Louisiana history with 558 victories. He is second all-time in the history of high school football in the United States to John McKissick of Summerville, South Carolina, who retired after the 2014 season with 621 victories.

Jim Hightower, who got his first state championship at St. Thomas More in 2016, is second overall with 396 wins. Hightower coached previously at Catholic-Pointe Coupee.

Lewis Cook of Notre Dame is fifth with 333 victories. Cook coached previously at Crowley and Rayne.

Ponchatoula head coach Hank Tierney is poised to crack the top 10. Tierney has 271 wins entering the 2017 season, having coached previously at Shaw and West Jefferson. Tierney is just two wins behind Dutton Wall.

Click here for your updated list of the 200-win club in Louisiana prep football history, courtesy of Robin Fambrough of The Advocate.