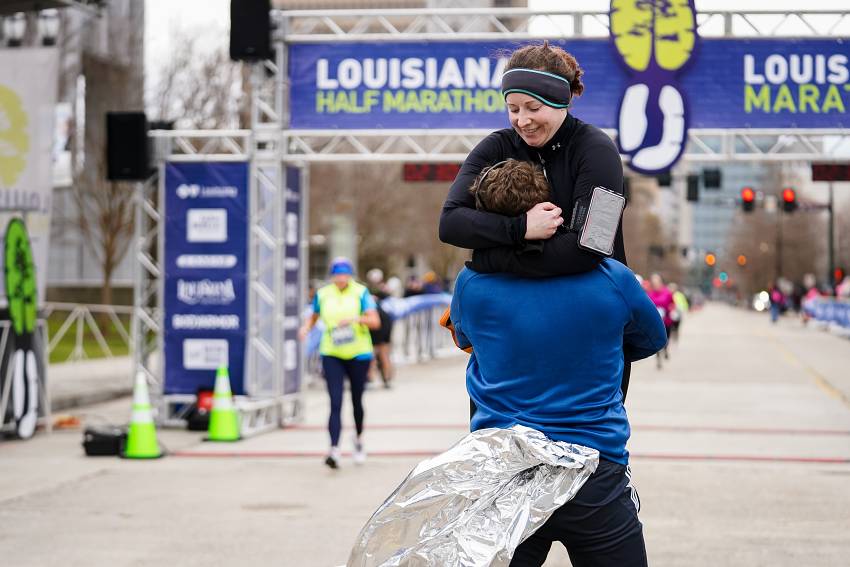 BATON ROUGE, La. — Louisiana Marathon runners were unbothered by the brisk breeze blowing through downtown Baton Rouge on Sunday morning. The crowd of runners gathered in front of the state Capitol just as the sun came up, and at the sound of the cannon, they took off for the 11th year of the event.

Many runners noted that they actually preferred the chilly temperatures as it kept them from burning out early in the race. Medical staff worked quickly to hand out Mylar space blankets as runners made the final push through the finish line.

Crossing the finish line marked the start of something new for one pair of half marathon runners, when 30-year-old Nathan Pledger got down on one knee and proposed to 30-year-old Aimee Stuart just after they finished their 13.1 mile run together. Stuart tearfully accepted the proposal before the couple picked up their medals and headed to the finish festival. The couple came all the way from Wichita, Kansas to compete in the race.

The first to finish the full marathon was 30-year-old Christopher Free, a Virginia Beach, Vir. resident, who came in at 2:38:56. 47-year-old Yila Jelali from Louisville, KY crossed the finish line next a little more than a minute later, followed by 35-year old Troy Dunkley, a Jacksonville, Fla. resident.

Lydia McCrae, a 40-year-old from Jacksonville, Fla., clocked in at 1:23:27 as the first female finisher of the half marathon with 24-year old Hannah Bourque from Youngsville as the best Louisiana female coming in at 1:24:46 while 42-year-old Kristin Wenstrom of Covington as the third place female finished with a time of 1:25:00.

Runners who competed on both Saturday and Sunday this weekend received a Déjà vu Award.

If they competed in the Mississippi Gulf Coast Marathon in Dec. 2021, the Louisiana Marathon’s sister race, they were awarded the Beach-2-Bayou medal.

The full race results and other information about the Louisiana Marathon can be found online here.

ABOUT FRESHJUNKIE RACING:
FRESHJUNKIE Racing is an event production company based in Baton Rouge, Louisiana. They have been producing a variety of running and multisport events through the southern United States for 12 years. For more info visit: https://freshjunkieracing.com/