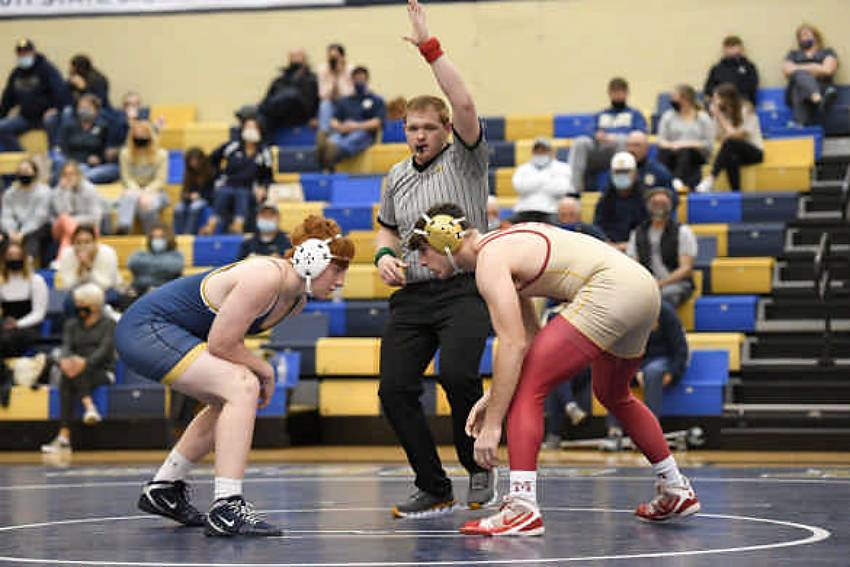 Earlier this year on January 15th and 16th, the annual wrestling tournament known as the Louisiana Classic was linked to multiple COVID-19 outbreaks. The wrestling season was immediately shut down to prevent further spreading. The season seemed to be done but the Louisiana High School Athletic Association (LHSAA) initiated a solution in order to complete the season.

Division I will have many legitimate contenders for the team title. Schools such as St. Paul’s, Brother Martin, Jesuit, Holy Cross, and East Ascension bring high hopes into the finals.

The St. Paul’s Wolves fell short last year as they came in second. However, the Wolves still accomplished a milestone in their school history. The Wolves earned team runner-up which was the highest place for their program. Now, the Wolves captured a total of two team titles but in division II under legendary Coach Craig Ketelsen. The Wolves made their presence known last season when they defeated Brother Martin in a dual meet 34-29. Despite winning the dual this was not the end goal.

A majority of the Wolves from last year’s team returned to finish what they started. The Wolves will depend on their big three of junior Jacob Houser, senior Carter Duet, and senior Peyton Ward to help capture the state title this year. Last year, Houser and Duet both finished runner-up and Ward won the 152lbs state title. The Wolves have a phenomenal team which was built by Coach Matt Pinero. The program is trending in the right way as Coach Pinero will have all of his guys fighting to the end.

The Brother Martin Crusaders are the defending state champions and will look to continue their streak in this uncertain year. The Crusaders have won eight team titles since 2012. Second year Head Coach Andrew Nicola will most likely not want as tight of a race in team points when compared to last year’s results. Brother Martin won last year’s state tournament by 242 points and St. Paul’s came short as they assembled 236.5 points.

This whole year has been consistent at being unusual and the whole state of Louisiana was shocked when the abnormal occurred. The Crusaders were defeated by the Jesuit Blue Jays 42-28 in a dual meet at Brother Martin. Again, the Crusaders lost last year to St. Paul’s in a dual and seized the state title in February.

Similar to the Wolves, the Crusaders will have numerous guys returning with state experience. Junior Mason Elsensohn, junior Rocco Horvath, and senior Ethan Castex will be the fuel of this team and are currently ranked in the top three of their respective weight classes. In addition, the Crusaders won the state championship last year without one individual champion which shows the importance of wrestling back.

The Holy Cross Tigers will also be contenders for the team title. The Tigers will have the notorious twins who are nationally recognized lead the team. Jacob and Evan Frost have been similar to two freight trains this year. Undefeated in Louisiana and both going for their third individual state championship. Jacob placed fourth and Evan placed eighth in the Super 32 tournament in October which possesses the best wrestlers in the nation.

The twins aren’t the only Tigers who will be seeded number one in their respective bracket. Charles Sauerwin III who competes in the 126lbs weight class has turned it on for his senior year as he will be the number one seed. Sauerwin has only one loss which comes from an out of state opponent. Sauerwin placed fifth last year in the state championship and has beaten notable opponents all throughout Louisiana.

Last year, Teurlings Catholic claimed the division II title with a comfortable lead. However, this year will be intriguing for one in particular school to make history.

The Archbishop Shaw Eagles placed third last year in the final team standings. Nonetheless, the Eagles have never won a team title in their entire program history. Head Coach Brandon Surrency who graduated from Shaw back in 2009 has really changed the direction of the program since taking over in 2018. The Eagles placed ninth and third which by the naked eye is an extreme jump for a newly appointed coach.

The Eagles have numerous starters returning from last year which will aid them to capture their first team title. Notable wrestlers are sophomore Haydin Tassin (13-3), junior Glenn Price (17-0), senior Ashton Surrency (16-1), and junior Jude Monaco (16-0). The one thing that stands out the most from the whole team is youth. Coach Surrency has multiple guys who can compete with any upperclassman despite being young.

The other schools who will be competitive for the title will be Teurlings Catholic, North DeSoto, and Archbishop Rummel. The wrestlers to watch are junior Ashton Sonnier (11-2), sophomore Ethan Boudreaux (15-2), senior Jacob Ramirez (28-2), senior Dylan Oliver (21-2), junior Joshua Vincent (9-2), junior Lance Ferguson (20-3), and sophomore Gabriel Whittington (14-0).

In 2020, the Basile Bearcats won the division III team title with ease. The Bearcats only possess a pair of team titles in their school history. One from 1991 and the other from last year. However, since head coach Bryan McCoy took over in 2015 the Bearcats have finished in the top seven each year. The team has potential to “run it back” for back to back team titles. Furthermore, the Bearcats did not participate in the notorious Louisiana Classic this year for unknown reasons. The most important tournament is the state tournament and like every school in the state they will not miss this event.