Louisiana by the Numbers: The best of every uniform (50-59)

Part 5 of a series

The fifth of our 10-part series looks at Nos. 50-59, which starts to bring basketball and baseball players into play. And we have some good ones – including four unsurprising choices if you were a fan of the Saints in the late 1980s and early 1990s.

No. 50 – Bob Pettit, LSU basketball (1951-54): A Baton Rouge native, Pettit was a two-time All-American with the Tigers and led LSU to its first-ever Final Four appearance in 1953 before an NBA career, all with the Hawks, that included 11 all-star appearances – including a still-record four All-Star Game MVP selections – and 10 first-team All-NBA selections. He averaged more than 20 points and 12 rebounds per game in every season of his NBA career and had career averages of 26.4 points and 16.2 rebounds. Pettit’s LSU jersey was retired at the end of his senior year – the first Tiger athlete ever to have his jersey retired. He’s a member of multiple halls of fame, including the Basketball Hall of Fame.

No. 51 – Sam Mills, Saints (1986-94): Part of the famed “Dome Patrol” linebacking corps of the Saints, Mills played in New Orleans for nine seasons after following Jim Mora from the USFL. Despite standing just 5-foot-9, Mills was a tackling machine (934 total stops as a Saint). He reached four Pro Bowls and helping the Saints to the first four playoff appearances in franchise history. Mills died in April 2005 after a two-year battle with cancer.

No. 52 – Ken Kavanaugh, LSU football (1937-39): An All-America end for the Tigers who was part of the “Greatest Generation,” Kavanaugh was finished seventh in Heisman Trophy balloting in 1939. A second-round pick of the Chicago Bears in the 1940 NFL Draft, Kavanaugh played two seasons with the Bears before a three-year tour of duty as a bomber pilot in Europe during World War II. He returned to the Bears following the war and played six more seasons, finishing with 52 career touchdowns.

No. 53 – Vaughan Johnson, Saints (1986-93): Johnson may not have had the tackle or sack numbers of his fellow “Dome Patrol” members, but he hit harder than just about anyone, earning the nickname “Super Collider.” Johnson, who came to New Orleans by way of the USFL, was a part of the Saints’ first four playoff teams and reached four consecutive Pro Bowls from 1989-92. Like his “Dome Patrol” mates, he is a member of the Saints, Greater New Orleans and Louisiana Sports halls of fame. Johnson died in December at the age of 57.

No. 54 – Roy Ebron, USL basketball (1970-73): Ebron, a 6-foot-9 center, came to Lafayette as a Parade All-American from Norfolk, Virginia, and along with Dwight “Bo” Lamar, led the Ragin’ Cajuns to a 74-13 record in three seasons and back-to-back trips to the NCAA Division I tournament (later vacated by NCAA probation). Ebron averaged 23 points and 14.2 rebounds per game as a sophomore and finished his career with 1,683 points and 1,064 rebounds – the latter of which remains a school record. He died in 2014.

No. 55 – Anthony Reed, Tulane basketball (1989-93): Reed, a native of Monroe, was the key figure in Tulane’s relaunch of its men’s basketball program in 1989 and led the Green Wave to the 1992 Metro Conference championship and back-to-back NCAA Tournament appearances, the first in school history. On his final field goal attempt in home on senior day in 1993 – just a couple of hours after his jersey was retired – Reed became Tulane’s all-time leading scorer. Reed was the Metro Freshman of the Year in 1990 and earned all-conference honors all four seasons with the Green Wave.

No. 56 – Pat Swilling, Saints (1986-92): Another part of the “Dome Patrol” group of linebackers, Swilling had five double-digit sack seasons in seven years in New Orleans, including a career-best 17.0 in 1991, when he was named The Associated Press’ NFL defensive player of the year. He reached four Pro Bowls and was twice named first-team All-Pro with the Saints. Swilling is a member of the Saints, Greater New Orleans and Louisiana Sports halls of fame. 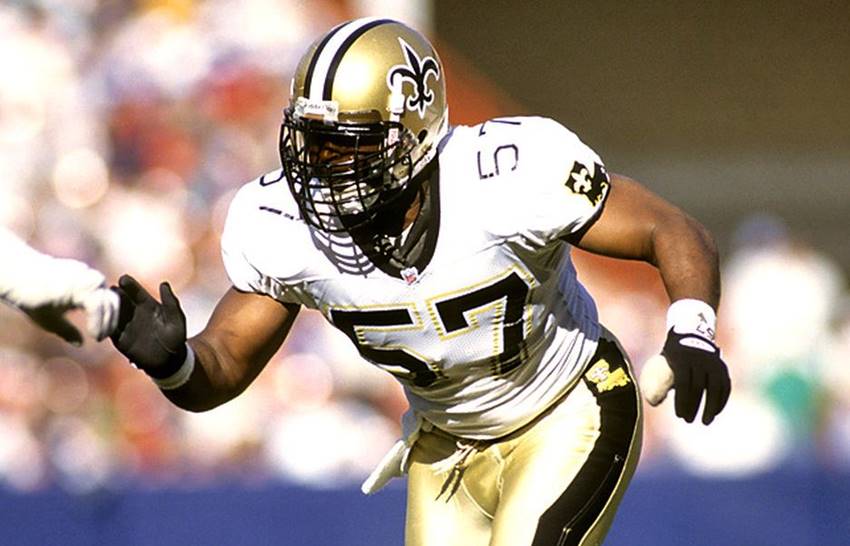 No. 57 – Rickey Jackson, Saints (1981-93): The best defensive player ever to wear the black and gold, Jackson came to New Orleans as a second-round pick in the 1981 NFL Draft out of the University of Pittsburgh. Playing on the Saints defense from 1981-93, he had a franchise career record 115.0 sacks – and that was without the NFL considering sacks an official statistic during his rookie year. His 40 forced fumbles still rank in the top 10 in NFL history. Jackson was selected to the Pro Football Hall of Fame in 2010, on the eve of the Saints’ Super Bowl victory.

No. 58 – Joe Federspiel, Saints (1972-80): “Joe Fed” manned the middle linebacker position for the Saints from 1972-80 after joining the team as a fourth-round pick in the 1972 NFL Draft out of Kentucky. His career totals included five interceptions and 10 fumble recoveries. He was inducted into the Saints Hall of Fame in 1993 and is also a member of the University of Kentucky Hall of Fame.

No. 59 – Keith Mitchell, Saints (1997-2001): A Pro Bowl selection on the Saints’ first playoff-winning team in 2000, Mitchell was a starter for parts of five seasons in New Orleans. He created big plays throughout his career with 18.5 sacks, four interceptions, nine forced fumbles and eight fumble recoveries. Mitchell turned to yoga and meditation after his career ended in 2003 and has become a celebrity yogi.