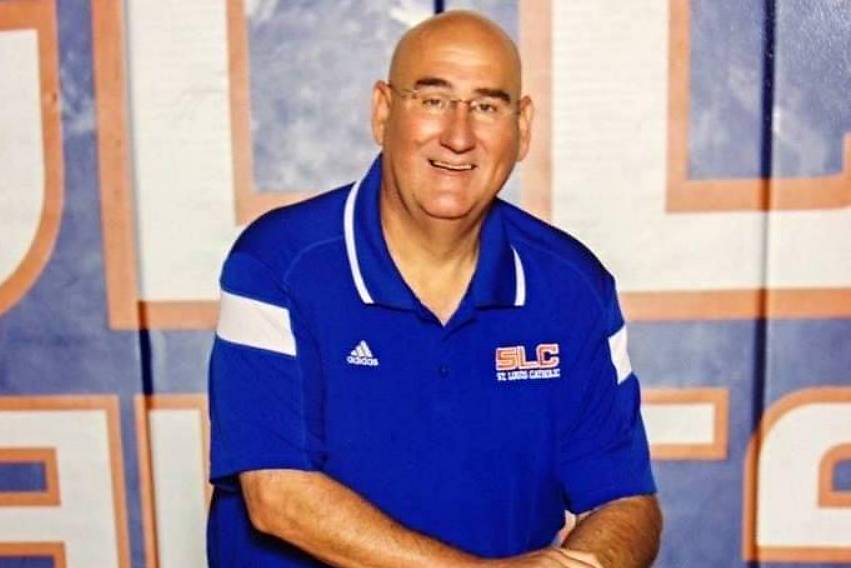 Cryer was in his first year as defensive coordinator for the Terriers after stepping down as head coach of Pope John Paul II where he served in that role the previous three years.

“I met Coach Cryer when he was the head coach at Vermillion Catholic, fresh off of winning a state title in 2003,” recalled Eric Held, Director of the Louisiana High School Coaches Association. “I had just gotten the (head coaching) job at St Mary’s in 2004 with a similar enrollment, roster size, demographics to Vermillion Catholic. I asked him every dumb question you could ask. He was patient and patiently answered every question.”

Cryer was an LSU alumnus who played for the Tigers in the early 1980’s. He was very active in the LSU L-Club long after his playing days.

Two years ago, Cryer was diagnosed with non-alcoholic cirrhosis of the liver and received a transplant on September 26, 2019. Cryer’s son Chris took over briefly as interim coach at Pope John Paul II while his dad was in recovery.

“Coach Cryer was a giant of a man and always had a smile on his face,” said Held. “He coached in many geographic areas of the state and always got the most out of his players. His teams always played hard for him.”

His daughter Kaci, who is currently an assistant women’s basketball coach at Houston Baptist University, was the former head coach of the McNeese State Cowgirls Basketball team from 2017 to 2021.

“First off I want to thank everyone who has reached out to our entire family the last few days. It has been extremely overwhelming the amount of love and support we have received. But that is a true testimony to an amazing husband, dad and coach. Please know it has been hard to respond to each one of you but we are reading them and appreciate it so much during this very difficult time for our family,” said Kaci Cryer.

“I know he was proud to have children that followed in his footsteps and he will be greatly missed,” Held said.

Cryer’s wife Kristie has been a contributor to Ken Trahan’s Original Prep Football Report in past years.

We at Crescent City Sports extend our condolences, thoughts and prayers to the Cryer family and the Vandebilt Catholic football community.

Cryer will be honored on Sunday, October 10th at 10 a.m. at the football stadium at 855 Hearthstone Drive in Baton Rouge.

“Please feel free to dress casual. If you would like, we ask if you could please wear your school colors in which my dad impacted you,” said Kaci Cryer.

“For those of you who are asking to help during this time. Here is our address and a donation link:

“We are also requesting that you visit our Facebook page (Coach Charlie Cryer’s Legacy) that was created to share a short story or short video on how he made an impact in your life. Our family would greatly appreciate it during this time.

Thank you again for your love and support to our family. We will miss him dearly.”