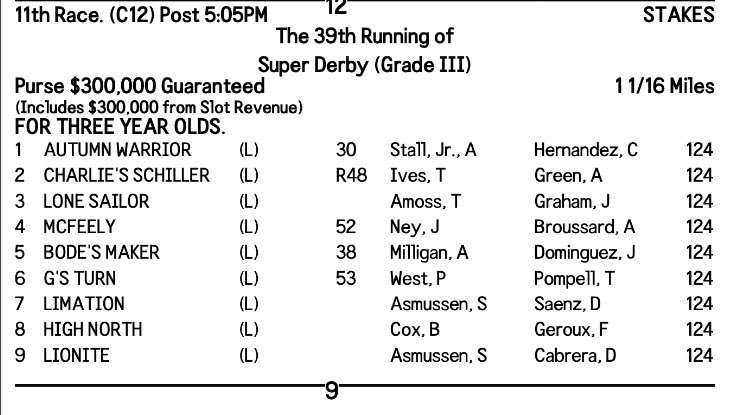 Entries were taken Monday for Louisiana Downs’ biggest racing day of the year, which is headlined by the 39th running of the Super Derby for 3-year-olds.

Lone Sailor, trained by Tom Amoss, has faced the best horses in the country throughout his sophomore campaign. Most recently, he finished third in the Grade I Haskell Invitational at Monmouth Park last month – his fourth in-the-money finish of his 3-year-old campaign without a victory.

For his career, Lone Sailor has a win, four seconds and two thirds from 12 starts with lifetime earnings of more than $579,000. Perhaps it’s a good sign, however, that Lone Sailor’s only career victory came on the Sunday before Labor Day a year ago, in a maiden race at Saratoga Race Course.

James Graham, who was the regular rider on Lone Sailor for the early part of his 3-year-old season, including the Kentucky Derby, has been named to ride on Sunday.