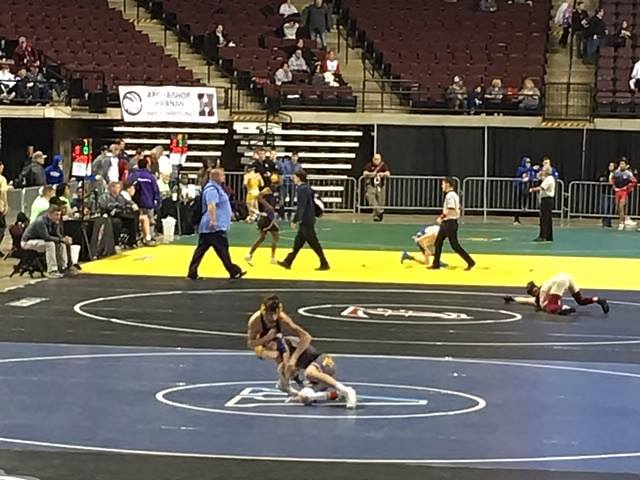 Several state championship events for the 2020-21 school year are set and set at familiar sites while three others have made bold, excellent moves.

The LHSAA state soccer tournament remains in Hammond at Southeastern University for a second straight year.

The two primary changes are girls basketball and wrestling.

The nonselect girls basketball championships will not take place in Hammond at the University Center at SLU. This will mark a return engagement as Hammond and SLU hosted the event several times previously, as recently as in 2016 and 2017. Most recently, the tournament was in Lake Charles this year and was hosted by Alexandria in between. Both did a good job.

University Center is well equipped to handle the event with a 7,500 seat capacity.

Since last hosting the event, the facility has undergone improvements, including much improved lighting and a new scoreboard. The event was well run and well received in its previous run in Hammond.

“Southeastern has a great facility and has done the event well in the past,” Bonine said. “Their convention authority and city officials are engaged and have done a very good job. We’re looking forward to going back there as well. We are very thankful for Lake Charles and Alexandria, who have done an excellent job as well.”

The biggest move is wrestling finally moving back to south Louisiana to the Raising Canes River Center.

The move is sound, intelligent and perhaps overdue.

CenturyLink Center is an excellent facility and parking was plentiful.

Kelly Wells and the Shreveport-Bossier Sports Commission did an excellent job with hospitality and staging the event. Kelly is a friend, a good man and a consummate professional.

The issue was and remains the enormous disparity between schools that wrestle from south Louisiana as compared to north Louisiana.

Of the 78 teams competing in the three divisions for state titles Feb. 14-15 in Bossier City, consider the breakdown of schools.

In Division I, only three of 32 participating schools were from north Louisiana (Parkway, Byrd, Airline). All others were from metropolitan areas south of I-10, ranging from the bayou parishes to the Greater New Orleans area to the Baton Rouge area to the Lafayette area to the Lake Charles area. None were from central Louisiana.

In Division II, only six of the 23 schools were from north Louisiana (North DeSoto, Haughton, Benton, Caddo Magnet, Huntington and Minden). All others were from south Louisiana, south of I-10.

In Division III, only five of the 23 schools were from north Louisiana (Bossier, Evangel, Lakeside, Summerfield, Calvary Baptist). Again, all others were from south Louisiana, south of I-10.

Doing the math, just 14 of the 78 participating schools were from north Louisiana, equating to 82 percent of the schools participating from south of I-10.

The hope of north Louisiana growing the sport over the six years it hosted the tournament in the last decade simply did not materialize, at least to any measurable level.

In 2011, there were 12 schools from north Louisiana which participated in the state tournament. Nine years later with six state tournaments taking place in Bossier City, that number had grown by just two schools joining the sport.

Then, there was the clear issue of the preponderance of fans and potential fans traveling three to five hours to the event and the cost of doing so with hotel stays.

Additionally, the extraneous travel costs for the plethora of schools participating will be significantly reduced.

In Baton Rouge, fans from the Lafayette and New Orleans area can travel back and forth each of the two days being an hour or just over an hour away. Those in Lake Charles have that option as well, being just two hours away.

The River Center is a suitable facility, in terms of location, capacity and logistics.

This will mark the first time Baton Rouge has hosted the LHSAA state wrestling championships since 1993, when the tournament was a Lee High.

The sport grew significantly and ultimately needed a bigger facility after years of rotating among high school facilities and even the University of New Orleans.

The Pontchartrain Center in Kenner stepped into the void in 1996 and served in brilliant fashion, with a nice facility, increased capacity, an excellent location and significant free parking. That occurred for 15 consecutive years, through 2010. The Kenner facility again hosted the tournament from 2012-15. The tournament grew to over 80 participating schools and reached a zenith of attracting right at 14,000 fans, at one point.

The event nearly or completely outgrew the facility, a primary reason that it is not returning to Kenner, as opposed to going to Baton Rouge. The Pontchartrain Center still remains as a gracious, outstanding host for the LHSAA state volleyball championships.

CenturyLink Center has a capacity of 14,000 but the upper deck was never utilized, instead curtained off as it was not needed to handle the number of fans attending.

“Since I’ve been the executive director, I have made a conscious effort to try to spread the championships around the state and keeping everyone happy,” Bonine said. “CenturyLink and Bossier City did an incredible job. This does not shine any negative light on what they did. In listening to the wrestling coaches, we listened well and got this squared away with Baton Rouge. We’re excited about it coming south and that it will be a good venue. I trust Adam McDowell of our staff and our advisory committee with making it the best it can be.”

Long-time tournament director and former USA Wrestling president Jim Ravannack has done a tremendous job of growing the sport and the event over the last quarter of a century.

“I think it’s going to breathe new life getting the people back engaged in it,” Ravannack said. “Shreveport has done a great job. They reached out to me to offer any assistance. That was very admirable and greatly appreciated. The sport wasn’t growing as far as our fan base or with the schools in that area. We’ll see the biggest change we’ve seen in the sport when we come back to Baton Rouge. We do our Louisiana USA Wrestling kids state tournament at Raising Canes River Center every year with 14 mats and it has been outstanding. The venue sets up perfectly for wrestling. Any seat is a good seat.”

Jimmy Bible, who has coached the powerful program at Brusly since 1999 and has coached the school to 12 state championships and five runner-up finishes, is very pleased with the move.

“I’m extremely happy,” Bible said. “I think people up north in Shreveport did a fantastic job. I’m more than happy to see it come into this area. I think we’ll get more fans in the stands and better for the kids. It was a long time coming. Bossier deserved to host every so often. I wouldn’t mind a permanent home in Baton Rouge but would be open to having it back north from time to time. This is going to be better for all involved. This was a long time coming. It is better for the sport.”

Andrew Nicola, who guided powerhouse Brother Martin to a Division I state championship in 2020, is thrilled as well.

“We’re really excited,” Nicola said. “When I first moved here, many of our alumni said they would come to Baton Rouge or to the Pontchartrain Center to attend the tournament but not to north Louisiana. I think the fan base will increase exponentially because of not having to make the five-hour trip. Overall, I’m elated, not just for our boys but for all schools and their ability to have fans attend and to support the event the way it should be supported.”

Tommy Prochaska, who has served as head coach at Catholic High in Baton Rouge for 22 years, winning Division I state titles in 2008 and 2010, cannot wait for the 2021 event.

“I think it’s great news for us to have it in Baton Rouge for the first time in 28 years,” Prochaska said. “Some people don’t even remember when it happened here previously. It will be a great opportunity to show the support we have for wrestling in south Louisiana. I think the crowds will be as big or bigger than they were at the Pontchartrain Center. It will be fun. They did a very nice job in Bossier City which we appreciate. There will be atmosphere for the event in Baton Rouge.”

Now, the sport and tournament has a chance to grow even more in a prime location.