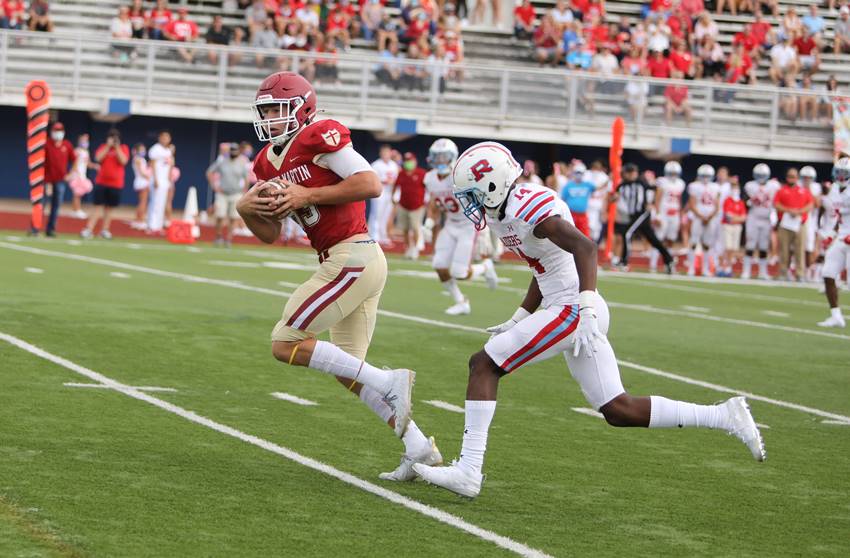 In Division I, Brother Martin (7-0) earned the top seed by virtue of excellent wins over Archbishop Rummel, John Curtis Christian, Ponchatoula and Tioga.

Unbeatens Scotlandville (6-0) and Byrd (8-0) received the second and third seeds.

Powerful Catholic of Baton Rouge (5-2) is the fourth seed and gets the other bye.

Defending Division I state champion Archbishop Rummel (6-1) is the fifth seed and gets an unexpected bye as No. 12 McKinley has opted out of the playoffs. Rummel will play at Catholic in the quarterfinals in a rematch of last year’s state championship game, won by Rummel 14-10. The Raiders have won three state titles since 2012.

The other matchups are rematch games from the Catholic League as No. 7 John Curtis Christian hosts No. 10 Archbishop Shaw. The Patriots won the regular season matchup 33-6.

In a quick of fate, No. 6 St. Augustine must play No. 11 Holy Cross for a second consecutive week. The Purple Knights beat the Tigers 56-35 Saturday.

The other threat in the class is No. 3 University Lab. The Cubs (6-1) have good wins over Madison Prep and Parkview Baptist and lost only to Catholic of Baton Rouge. U-High has five state titles, most recently in 2018.

Archbishop Hannan (5-2) is the fourth seed and the Hawks will host No. 13 St. Michael.

In Division III, unbeaten Newman (8-0) earned the top seed with impressive wins over St. Charles Catholic, Riverside Academy and Country Day. The Greenies get a bye before facing the winner of No. 9 Holy Savior Menard at No. 8 Catholic of New Iberia, who knocked out Newman (49-7) in the Division III semifinals in 2017.

Northlake Christian is seeded 11th and must travel to unbeaten No. 6 Ascension Episcopal with the winner to take on No. 3 Notre Dame in the quarterfinals.

Defending Division III state champion Lafayette Christian is extremely dangerous at the No. 5 seed. The Knights (6-1) lost only to 5A top seed and defending state champion Acadiana. LCA gets an unexpected bye as No. 12 Houma Christian opted out of the playoffs. The Knights advance to face unbeaten No. 4 seed Episcopal, a very tough draw for the latter.

Calvary Baptist (5-2) earned the top seed in Division IV. The Cavaliers played a very challenging schedule, falling only to 5A unbeaten Byrd and to defending Division I state champion Archbishop Rummel. The Cavs will host No. 16 St. Martin’s Episcopal in the opening round.

Unbeaten Vermilion Catholic (6-0) is the second seed and the Eagles will entertain No. 15 St. Frederick.

Country Day (3-2) climbed to the sixth seed with a big win over Riverside Academy Saturday. The Cajuns will host No. 11 St. Mary.

On the non-select side, defending champion Acadiana (6-1) earned the top seed in Class 5A by virtue of beating John Curtis, Ruston, Lafayette Christian and Lafayette and losing only to Catholic of Baton Rouge. The Wreckin’ Rams will host Covington (2-5). Acadiana has won five state championships.

No. 4 Ponchatoula (6-1) will entertain No. 29 St. Amant. The Green Wave are very good offensively and the Gators are a dangerous low seed.

Slidell (4-4) is seeded 27th and must travel to No. 6 Alexandria. The Tigers won their final three games of the regular season.

No. 18 East St. John (5-1) fell short of earning a home game and must go to No. 15 Woodlawn of Baton Rouge in a good matchup of good teams that could make noise on their side of the bracket.

Carencro (7-1) edged out Karr for the top seed in Class 4A. The Bears have a big win over West Monroe and lost only to St. Thomas More. Carencro gets a bye in the first round after No. 32 seed Woodlawn of Shreveport opted out of the playoffs due to COVID-19 issues. Carencro won a state championship in 1992.

The four-time defending champion Cougars (6-1) have big wins over Catholic of Baton Rouge and John Curtis Christian, losing to only St. Augustine.

No. 6 Warren Easton (5-2) is used to making deep playoffs runs. The Eagles will host No. 27 Breaux Bridge. Easton is on the same side of the bracket as Karr so the two rivals would not meet in the finals, as has been the case the last two years. Warren Easton has made the state title game three times since 2014.

No. 17 Lakeshore (4-4) won its last three games but just missed a home playoff game and the Titans must travel to central Louisiana to face No. 16 DeRidder.

No. 22 Landry (3-2) could be a live underdog at No. 11 Cecilia. The Chargin’ Bucs won their last two games, including a solid win over Belle Chasse.

Unbeaten Jennings (6-0), who reached the state championship game a year ago, is the top seed in Class 3A. The Bulldogs will entertain No. 32 Erath in the opening round.

Defending state champion St. James (6-2) is seeded fifth and will be at home against No. 28 Abbeville.

Jewel Sumner (7-1) earned the sixth seed and the Cowboys will entertain No. 27 Iota.

Unbeaten Mangham (8-0) is the second seed and the Dragons will entertain No. 31 Madison.

No. 9 Amite (4-1) is a very dangerous team and the Warriors, who have won five straight titles, including in 2018, will entertain No. 24 Capitol.

South Plaquemines (4-3) fought its way to a home game as the 16th seed and the Hurricanes will host No. 17 Franklin.

A live underdog is No. 18 Kentwood (4-2), who travels to No. 15 Jonesboro Hodge. The Kangaroos have nine state championships, most recently in 2018.

Defending state champion Oak Grove (7-0) is the top seed in 1A and the Tigers get a first round bye before hosting the winner of No. 16 East Beauregard and No. 17 Montgomery.

East Iberville (5-1) is the No. 2 seed and has a bye before taking on the winner of No. 15 Northwood-Lena and No. 18 Slaughter Community Charter.

No. 9 West St. John (1-4) has not had its usual excellent season but the Rams cannot be ignored after playing a tough schedule. West St. John hosts No. 24 North Central.