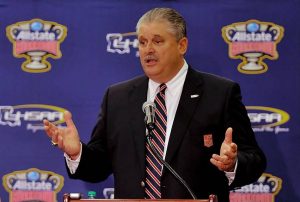 The sports season is officially over for high school athletics in Louisiana.

The Louisiana High School Athletic Association, after meeting internally and with its executive committee and listening to the recommendation of statewide officials and based on information from the Center for Disease Control and Prevention, announced that decision Thursday morning.

As a result, the sports of baseball, softball, gymnastics, golf, tennis, powerlifting, bowling, bass fishing and outdoor track and field will not complete their seasons.

In an interview Thursday morning with Crescent City Sports, LHSAA executive director Eddie Bonine held out as long as possible on canceling the seasons, hoping that things would clear up more but was left with no choice.

“The decision has been one that has been pondered for a long time,” Bonine said. “We pushed back things as far and as long as we could.

There were other factors which went into the decision.

“Seniors graduate (as soon as) the second week of May,” Bonine said. “Not everyone had distance learning capabilities. They are having to feed all these kids. There were a lot of variables involved. Eventually, there would have to have been a substantive training period before sports and athletes could continue playing real game competition.”

The obstacles proved too large to overcome.

“It became a mountain too tall to climb,” Bonine said. “We were running out of time on the calendar. We held on as long as we could. Most people knew the chances were slim. We made a difficult decision to try to do the right thing.”

Bonine and the LHSAA have now turned their attention to the 2020-21 school year.

“We are now preparing to resume with fall sports, hoping that things clear up then,” Bonine said. “We clearly wanted to see the seasons resume and tried but we had to do what was right for all involved.

“We care deeply about all of our schools and all of our student-athletes. Here is hoping that all of our seniors can have a real, substantial graduation. I have a son, too, who is a senior. We fully comprehend the gravity of the situation.”

Here is the memo to schools from the LHSAA on the decision.