Lesser-heralded college quarterbacks stating their case for the NFL 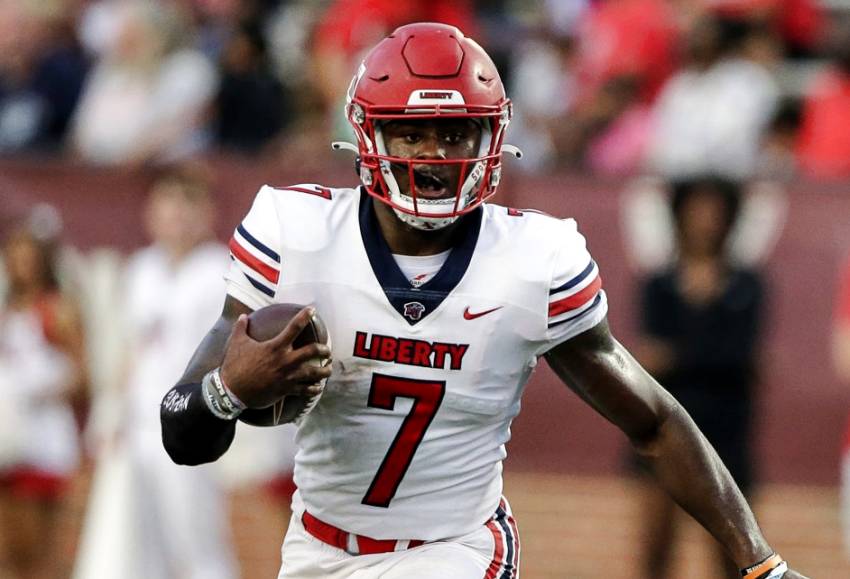 Everyone loves a feel good story.

An underdog rises out of the ashes and reaches the heights of his profession.

Well, if you take a good look at the landscape of college football these days, quarterbacks steal most of the headlines. Some of them had to do more than others to get there.

If you look ahead at the projected 1first round of the 2022 NFL Draft, all of the buzz these days centers around names like Matt Corral (Ole Miss), Sam Howell (North Carolina), Carson Strong (Nevada) and Desmond Ridder (Cincinnati).

Until most recently, you could have added Oklahoma’s Spencer Rattler to this list, but I’m not certain he is even the best QB on his own team. But I digress.

Corral and Howell have had the Power 5 stage to increase their stock but Strong and Ridder may be less known to the typical fan. Where you come from does not ultimately matter to the pros.

The history of the NFL includes quite a few college unknowns who blazed a trail to success and even winning Super Bowls. New York Giants legend Phil Simms (Morehead State) and Washington’s Doug Williams (Grambling) went through a lot to reach the mountain top. Joe Flacco (Delaware) won a title with Baltimore. Kurt Warner (Northern Iowa) has a story fit for the movies (literally, coming soon).

All of which brings us to the present. Four names who you need to know were overlooked as recruits and have been flying under the radar until now.

Malik Willis, who hails from Atlanta, Ga, has tacked on 30 pounds since his freshman season. Many project the Liberty QB to not only be a first rounder in ’22 ,but give him a chance to become the top pick overall.

Beginning his college football journey as a three-star prospect, Willis was not some total unknown. He had offers from Louisville, Georgia State, Virginia Tech and Ohio U. but almost ended up as a defensive back or wide receiver at Auburn. His uncle, James Anderson, was a linebacker at Va. Tech before embarking on an 11 year NFL career which included a stop in 2015 with the Saints. A fine athlete who runs a 4.52 in the 40, Willis originally committed to Virginia Tech before opting to  Auburn.

After a short stay at Auburn, Willis transferred to Liberty in 2019. Still a bit raw, he possesses tremendous  upside thanks to the athleticism and a powerful arm to make the tight window throws. He has improved his ball security and grown under head coach Hugh Freeze.

The Lions, Eagles and Steelers hold Willis in high regard on their draft boards.

Willis has accounted for 1,327 yards passing, 13 touchdowns and 3 interceptions, completing 67.7% of his passes for the season.

Grayson McCall, a redshirt sophomore at Coastal Carolina, has been nearly flawless this year. So far he has tossed for 1,478 yards, 14 TD passes and just one interception, completing 79.8% of his tossses.

A real feel good story, McCall was raised in Indian Trail, North Carolina, population 39,000. He received offers from Coastal Carolina,  Army,  Eastern Kentucky, Gardner-Webb and Chattanooga as a two-star prospect in 2019. He redshirted his freshman season before tureing the Cinderella Chanticleers in a national story. McCall led CCU to a 11-1 mark last season, losing only to Willis and his Liberty squad, 37-34, in the Cure Bowl in overtime.

McCall was tabbed as the Sun Belt Freshman of the Year and was nominated for the Davey O’ Brien  and Manning Awards after throwing for 2,488 yards, 26 touchdowns with just three interceptions, and a 68.8% completion rate. Driven to be the best, McCall can really spin it, possessing good pop on his throws, arm strength on his deep offerings and obvious accuracy. He feels pressure and adjusts, showing excellent mobility.

Kenny Pickett of the Pittsburgh Panthers is the highest rated senior signal caller by Pro Football Focus. He operates the No. 1 ranked offense in the country, forcing his name into the Heisman Trophy watch with 1,731 yards passing, 19 touchdowns and one interception, completing 72%.

As a three-star prospect in 2017 from Oakhurst, New Jersey, the former Temple commitment also received offers from  Boston College,  Buffalo, Coastal Carolina, UConn, Iowa, Toledo, North Carolina and Texas State. Before he takes his final snap at Pitt, he will most likely have started over 50 games as a four-year starter.

Pickett can move in the pocket, but also roll out while keeping his eyes downfield. He has a little bit of Brett Favre moxie in his game. Pickett will stand strong in the pocket and take a hit. The arm strength and vision are impressive. He might be a day two draft steal.

Bailey Zappe is a true name out of nowhere. Raised in Victoria, Texas, he is ranked as the second best QB in the FBS by PFF as the triggerman for Western Kentucky.

As a freshman (11 games) at Houston Baptist where he played from 2017-2020. When his offensive coordinator Zach Kittley left  for Western Kentucky, Zappe followed him. It’s no wonder why Kittley wanted to bring him to Bowling Green.

At HBU, Zappe threw for 8,416 yards, 73 touchdowns with 29 interceptions. He operated an Air Raid attack, averaging 458 yards per game. In the 2020 season opener on the road against  Texas Tech, HBU suffered a 35-33 loss on a failed two-point conversion try late. The Red Raiders were favored by 40 points but Zappe threw for 567 yards and four touchdowns in the shoot out.

For the ’21 campaign, he has 2,235 yards through the air including 21 scoring tosses and three interceptions while notching a 70.4% completion rate in the Air Raid. Just a couple of weeks ago against unbeaten UTSA, Zappe threw for 523 yards, five touchdowns and an interception in a 52-46 loss. He has thrown for 400 yards or more three times this season.

An NFL team could do worse than take a chance on Zappe in the middle rounds of the spring draft. 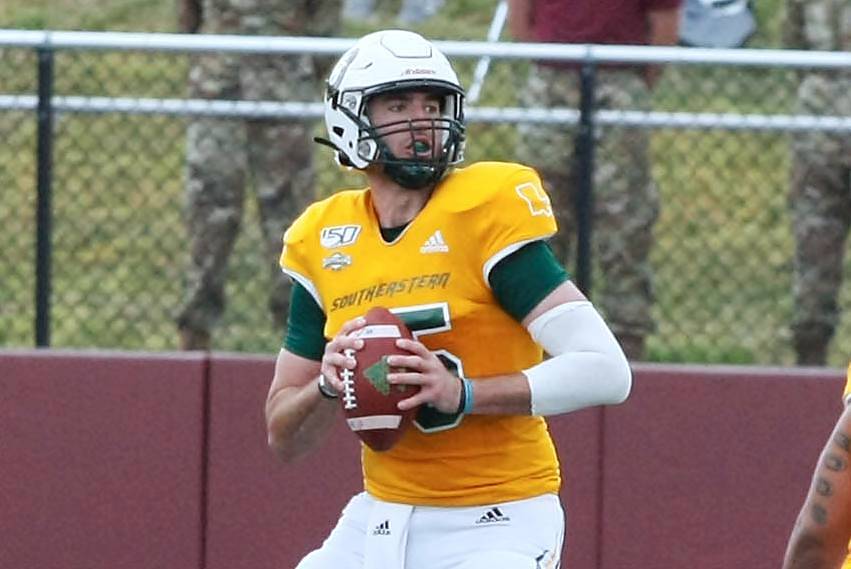 Southeastern Louisiana’s Cole Kelly is the third leading passer in the FCS with 1,999 yards, 18 touchdowns, 5 interceptions, completing 74.5% of his tosses. He’s an NFL prospect to b certain

Against Nicholls  last week, Kelley completed 76% of his offerings for 406 yards and five touchdown passes, adding two more as a runner and amassing 573 total yards. He threw for 495 yards in a 45-42 loss to La. Tech on Sept. 11.

The winner of this past season’s equivalent of the Heisman in the FCS, Kelley holds the school record with 72 total touchdowns and counting.

Kelley transferred to back home to Lousiana from Arkansas where he played in 18 games with the Razorbacks. The 6′-foot-7 native of Lafayette native models his game after Ben Roethlisberger.

Memphis freshman Seth Henigan, native of Denton, Texas, is not draft eligible yet but worthy of a mention. He has accounted for 1,938 passing yards, 14 touchdowns and three interceptions, currently the fifth ranked passer in the country. In a 35-29 loss to Tulsa last week, Henigan threw for 463 yards. In a season-opening 55-50 win against Arkansas State, his very game as a starter, he was 22-of-33  for 417 yards and five scores.

LSU’s Damone Clark has been a bright spot for the Tigers’ defense. His 69 stops rank him second nationally among tacklers. The 6-3, 245-pound senior had a season high 15 tackles against Mississippi State to earn SEC Defensive Player of the Week and followed that effort up with 14 more stops against Kentucky last week.

Nicholls wide receiver Dai Jean Dixon is second in the FCS with 42 catches, turning them into 627 yards and five touchdowns. Last week against Southeastern, he had 11 catches for 171 yards and two scores. On Sept. 11 in a near upset of UL Lafayette, Dixon corralled 14 balls for 198 yards and two touchdowns.

The 6-foot-4 product of Edna Karr is the cousin of Falcons linebacker Deion Jones, a Jesuit and LSU product.