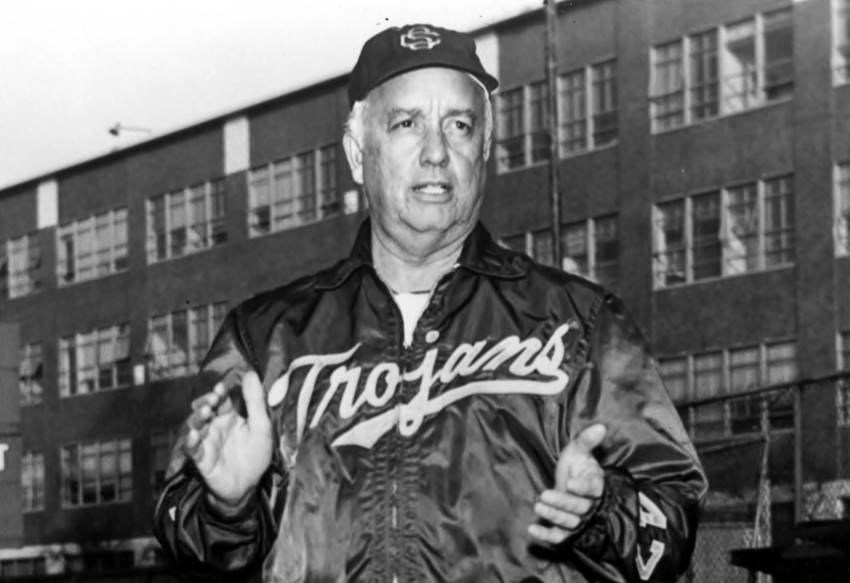 Raoul “Rod” Dedeaux was the winningest coach in college baseball at the time of his retirement in 1986.

Born in New Orleans in 1914, his family moved to the West Coast when he was a youngster, and he eventually became the head coach at the University of Southern California where his teams won 11 College World Series championships.  The baseball program he established at USC became the standard for modern-day college programs.  He was named “Coach of the Century” in 1999 by national baseball publications.

Dedeaux first made his name in baseball as an all-city selection for Hollywood High School in Los Angeles.  He played three years for USC, serving as team captain during his senior season.  As a result of having had workouts with Casey Stengel during high school, Dedeaux was signed out of college by the Brooklyn Dodgers in 1935 on Stengel’s recommendation.

After playing most of the 1935 season for Class C Hazelton, Dedeaux received a September call-up to the Dodgers, who were managed by Stengel.  He made his major-league debut on September 28 when he appeared as a late-inning defensive replacement.  The next day Dedeaux got a start at shortstop and went 1-for-4, hitting an RBI-single.  Those would be the only two games of his major-league career.

He returned to the minors the next season but suffered a back injury that forced him to quit.  Returning to Los Angeles, he invested $500 remaining from his signing bonus to form a trucking company that eventually grew into a million-dollar firm (DART Entities) specializing in world-wide distribution.  Dedeaux would remain as the company’s president, involved in its daily activities until his death.

Dedeaux attempted a comeback in pro baseball when he played for several West Coast minor-league teams in 1938 and 1939 but ultimately wound up playing for and managing semi-pro teams in the Los Angeles area.  USC was one of the teams against which Dedeaux’s squad would frequently play practice games.

When USC baseball coach Sam Barry was called into military service in 1942 during World War II, Dedeaux was named interim head coach.  After Barry returned in 1946, Dedeaux was retained as the co-head coach through the 1950 season, although he was responsible for all the major decisions involving the team.  USC defeated Yale in the second-ever College World Series in 1948.

Ten years later, USC returned to the College World Series to defeat Missouri after coming out of the loser’s bracket.  Three more championships followed in the 1960s, as the program became a regular source of major-league players.  Dedeaux’s Trojans captured a still-unbroken record of five consecutive national championships during 1970 to 1974, including wins over other prominent national programs such as Arizona State, Miami, and Florida State.

His 1978 club defeated Arizona State in the CWS for the third time in the decade. He still holds the record with 11 College World Series championships as a coach.  Dedeaux ended his 45-year tenure in 1986. He amassed a record of 1,332-571-11 (.699), making him the then-winningest coach in collegiate baseball history.

Dedeaux remained actively involved in his business during his coaching tenure at USC. During baseball season, he worked in the company’s office in the mornings and then carried out his coaching duties in the afternoons. It was often joked that Dedeaux coached a baseball team in his spare time.

He was responsible for building the USC program into a national power, as well as helping to elevate college baseball across the entire country. Before Dedeaux developed his program at USC, major-league organizations didn’t typically look to collegiate baseball as a major source of amateur players. That changed with Dedeaux, who sent nearly 60 Trojans to the major leagues. Among the more successful players were Ron Fairly, Don Buford, Tom Seaver, Dave Kingman, Fred Lynn, Roy Smalley, Steve Kemp, Mark McGwire, Steve Busby, and Randy Johnson. Altogether, he sent nearly 200 players to professional baseball careers.

Among the many honors Dedeaux garnered during his career were “Coach of the Century” in 1999 by Baseball America and Collegiate Baseball. As part of the 50th anniversary of the College World Series in 1996, Dedeaux was named the head coach of the All-Time CWS team by a panel of former World Series coaches, media, and college baseball officials. Dedeaux was named Coach of the Year six times by the American Baseball Coaches Association and was inducted into the organization’s Hall of Fame in 1970.  USC’s baseball field bears his name and a bronze statue of him ushers fans into the stadium.

Dedeaux died at age 91 in 2006.  He never had any baseball ties to New Orleans.  He has distant relatives still living in the area.